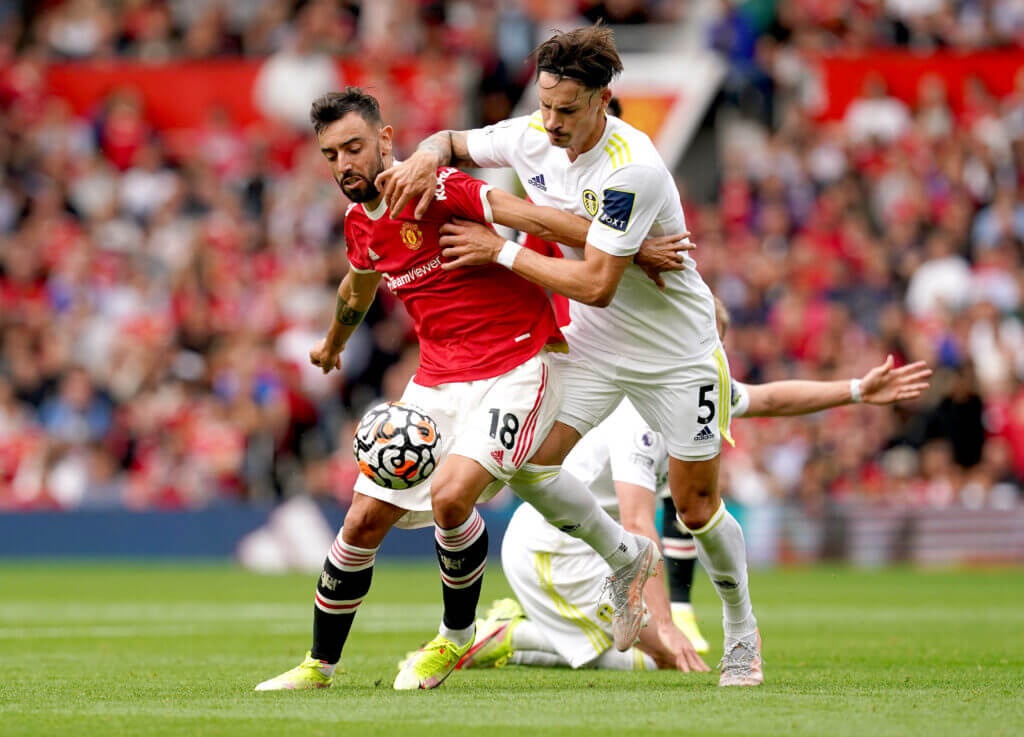 Leeds United made a poor opening day start to the new Premier League season after losing 5-1 against Manchester United on Saturday.

The Whites trailed 1-0 at half-time but restored parity after the break courtesy of a thunderous strike from Luke Ayling.

Bruno Fernandes scored a hat-trick, while Mason Greenwood and Fred also got their names on the scoresheet.

Kalvin Phillips could only make the bench after he was given an extended rest following his participation in the European Championships.

Robin Koch played in the defensive midfield role. He initially looked comfortable but was run ragged in the second half by the clever movements of Fernandes and Pogba.

Some fans took to Twitter to express their reaction to Koch’s display, and they were far from impressed.

Mesliers distribution today and for a while now has left a lot to be desired..

Most of them very sloppy and just don’t look up for it.

Absolutely spanked and deservedly so! Without Kalvin and Llorente it was always going to be damage limitation.

Reality is, quality in the right areas for them has destroyed us today. Rodrigo is not a 10 and Koch is not a CDM.

Over to you Radz and Victor. We need depth #lufc

Raphinha puts a good chance wide. Got to say, although Koch has had a torrid game, it was his quick thinking and stepping up which created the chance.#LUFC trail 5-1

A really sobering start and a reminder of how badly Leeds need cover for Phillips.

Koch and Struijk are both excellent players but neither are midfielders and can’t be relied on every time Phillips isn’t available/fit. #LUFC

I really thought Koch would have been better in that cdm role with having being a defender but he’s been lost today. It’s cost us heavily. Need Phillips starting pronto #lufc #alaw #mot

Harsh to put all the blame on the CBs TBF, I don't think Koch has seen Fernandes or Pogba all game. He's just not a DM. #LUFC

Mistake not to replace Koch with Phillips at HT #lufc

#lufc Koch is having what may actually be one of the worst performances I've ever seen an outfield player have in a Leeds shirt, he's handed them 3 goals

This might be the worst Koch performance I have seen since that time I drank half a bottle of Pernod. #lufc

Leeds are looking to sign a midfielder this summer, and this result highlights why they need a solid back-up for Phillips.

Koch, Pascal Struijk and Diego Llorente provide cover in the absence of Phillips, but Leeds need a specialist midfielder in that role.

Leeds will face Everton in their next Premier League game at Elland Road.