Latest developments from Sky Italia have confirmed that Manchester United’s €50m move for Real Madrid’s Angel Di Maria has been hijacked by French champions Paris St Germain. The sensational story has also been confirmed by Madrid based newspaper MARCA. 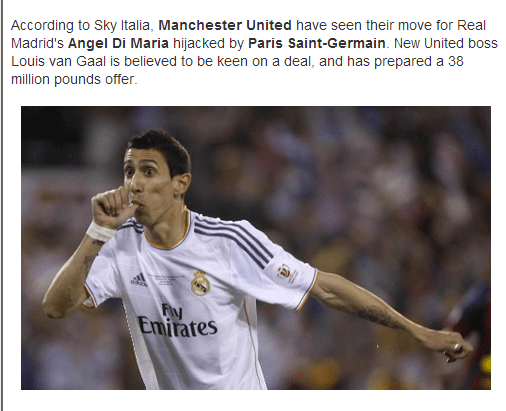 The reports come in stark contrast to English tabloid Metro who proposed this morning that Di Maria had agreed on a £150,000-a-week contract with the Red Devils. However the credibility of the tabloid is declining day by day, who have resorted to terms like “We Understand” and “Spanish Reports says” to sensationalize transfer deals which lack veracity, accuracy and conformity to facts.

However we here at Soccerlens have checked every possible top Spanish newspapers and there has been no such claims that Di Maria has agreed to join the Red Devils.

Soccerlens view: We had reported earlier this week that PSG are willing to pay a whopping €70m for Di Maria as reported by Spanish newspaper AS. Although Real manager Carlo Ancelotti wouldn’t want to lose one of his prized assets, it would be tough for any club to reject the crazy money that is on offer.

With the transfer situation regarding the Argentina getting interesting, we will keep you updated on the recent developments.