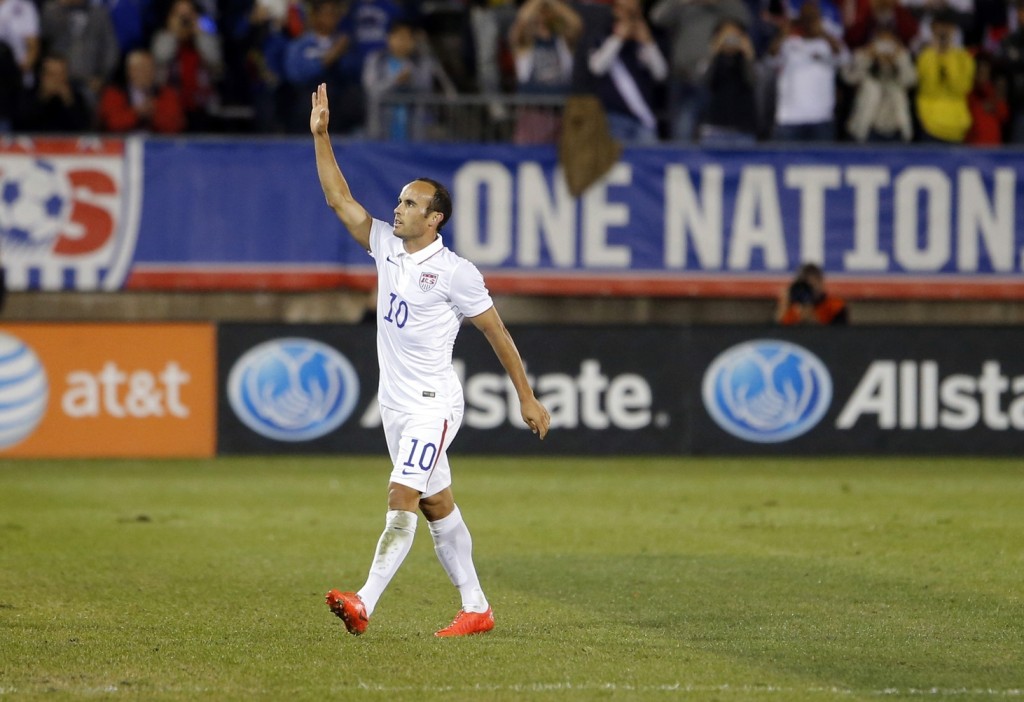 The Yanks nearly sent off the greatest player in U.S. Soccer history with a victory.

In the 88 minute Enner Valencia wild swerving goal denied the United States to give Landon Donovan a victory in his final match with the USMNT, as his goal tied the game at 1-1 on Friday night at Rentschler Field.

Valencia revived the ball less than 10-yards away from the top of the penalty box. He quickly changed his direction towards the goal, and right before U.S. center back Tim Ream could completely shut his angle down, the West Ham United forward fired a shot.

The ball first flew over the head of Ream and then dipped after it passed his body. The ball was heading to the left hand side of the goal and then it suddenly swerved to the right and the Yanks goalie Brad Guzan was left standing in the dust of Valencia powerful shot. His long range goal would level the game 1-1.

“I couldn’t see it come off his foot,” Guzan told Soccer By Ives. “It came over the top of Tim Ream. As soon as it came over, it was just constantly leaving me. I took a step to my right, nine times out of 10 that either gets blocked or you probably make a save but unfortunately tonight it wasn’t to be.”

Though in the first half, the Yanks were in control of the match. A big reason for their dominance was Landon Donovan; he was moving the Yanks offense and creating lethal chances from the very start of the match. The active start for the Yanks would pay off quickly, in the fifth minute Mix Diskerud would put the U.S. ahead with a close powerful low strike to the bottom right hand corner of the net.

The goal came through a beautiful build up play that had four different players touch the ball before Diskerud hammered the ball from inside the heart of the penalty box. After the goal, the USMNT kept pressuring the Ecuadorian defense, and it seemed that they were going to add on to the lead. Even Donovan came close of scoring in his final match, but his shot dinged of the right hand post and denied the Hollywood script ending.

At the 21 minute, 22-year-old Joe Gyau was forced to leave the game early after picking up a knee injury.

“It was a bummer to lose Joe Gyau with a potential knee issue,” Klinsmann told Soccer By Ives. “We will figure that out with the medical staff by tomorrow morning. We hope it’s not so bad.”

Donovan was subbed off at the 41 minute, and the entire stadium erupted and cheered him off the field for the last time in USMNT uniform, and the 14-year career as a U.S. international came to end.

“It’s a surreal feeling,” Donovan told Soccer By Ives. “I’m not overly comfortable with that kind of attention on me, and so it was a battle with myself to just try to enjoy it and allow it and appreciate it, while balancing still trying to play a game.”

The Yanks attack and defense began to slip a little after Donovan left, but the USMNT held to keep the 1-0 lead going into the halftime break. In the second half, the South Americans stepped their offense up and kept Guzan busy in the second half making four out of his six saves in the final 45 minutes.

Eventually near the end of the game Valencia would crash the party with his goal. However, at the last seconds of stoppage time 21-year-old forward Bobby Wood had a clear chance to win the game. As he approached the Ecuadorian goalie Máximo Banguera from the left hand side of the post.

Wood had a clear chance to take the winning shot, but instead the young 1860 Munich forward attempted to pass the ball to substitute forward Chris Wondolowski, who made a run to the center of the box. Before the pass could get to Wondolowski, the ball was cleared out of the box from the Ecuadorian defender and the game would end 1-1.

“I think we saw a really entertaining game,” USMNT Head Coach Jürgen Klinsmann told Soccer By Ives. “It was a nice game between both sides. I think we controlled the first 60 minutes and did really, really well over those 60 minutes. We should’ve scored the second goal, simple as that, to close it down.”

The USMNT will be in action again on Tuesday at Boca Raton, Fla. when they host CONCACAF rivals Honduras at 8 p.m. Eastern Time.