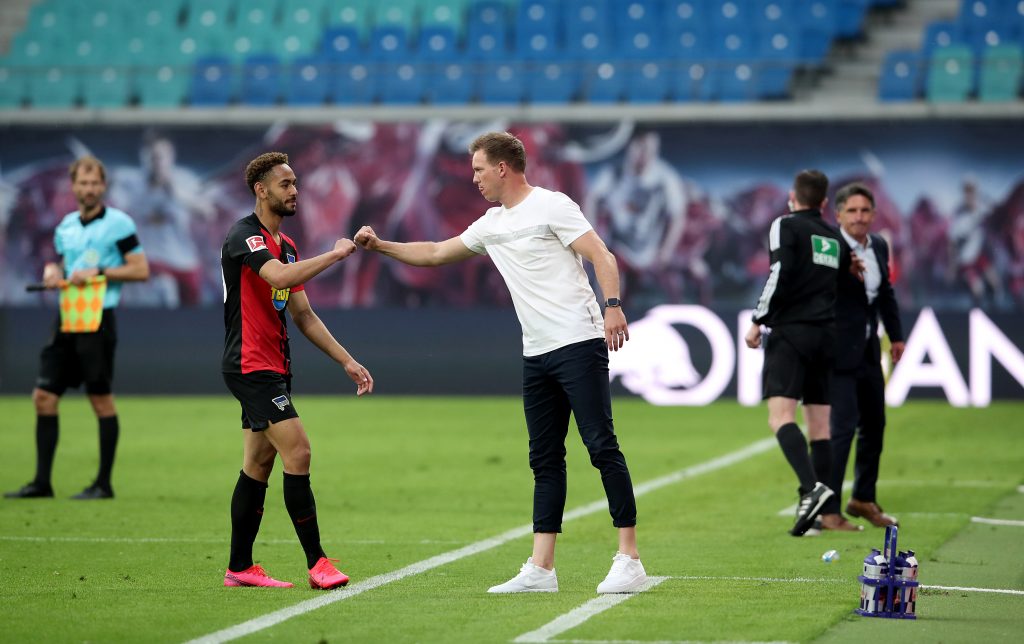 RB Leipzig welcomed Hertha Berlin to the Red Bull Arena, knowing that a win would help them leapfrog Borussia Dortmund in the Bundesliga table, to go up to the second place.

RB Leipzig’s zonal marking cost them early on as Grujić was able to get a free tap-in from Plattenhardt’s corner.

But it was another corner which brought Leipzig the equaliser, as Klostermann headed it to the far post.

The second half so Hertha emerge as the better side early on, but they couldn’t create a substantial chance.

Halstenberg was carrying a yellow card from the first half after he had hacked Cunha down, and he did that again in the second, which earned him a second yellow, so Leipzig were reduced to 10 men.

But soon, Schick was able to get a shot away which Jarstein somehow spilled and parried into his own net, for a horrible own goal.

After a period of intense pressure from Hertha, Cunha won a penalty with his dancing feet, which Piątek slotted in.

Despite further late pressure from Hertha, they only managed a 2-2 draw, leaving bth sides slightly frustrated but content at the same time.

Hertha looked to frustrate Leipzig by minimising the space between their midfield and defence, thereby preventing them from playing in between the lines.

After going a man up and a goal down, they brought a second striker, Piątek, on.

They pushed a lot, and eventually, Cunha won a penalty, which the aforementioned substitute converted.

Thereafter Hertha pushed due to their numerical advantage, but they couldn’t create a real chance.

Boyata vs Werner – Boyata did very well to keep Werner quiet, who tried his best to liven things up, but was constantly followed down either flank.

Nkuku vs Pekarík – It was an even battle, as both parties won the challenges. Neither made a major mistake, so it can be called a draw.

Péter Gulácsi – Had a decent game. He didn’t have to make too many saves, but couldn’t have kept either of the two goals out. 6.5.

Lukas Klostermann – Got the equaliser for his side with a brilliant header. Was solid defensively thereafter. 7.25.

Dayot Upamecano – Solid at the back as always. 7.

Marcel Halstenberg – He was decent defensively, but made a very silly challenge to earn the red card, which ended up costing his side dear. 5.

Konrad Laimer – He was strong in holding midfield, as he made lots of crucial challenges. 6.75.

Marcel Sabitzer – Tried to string his side’s attacks together, but couldn’t do much. Helped out in midfield as well. 5.5.

Christopher Nkunku – His set-piece deliveries were not great, but he got his 13th assist of the season from a corner. He threatened with his speed throughout the game, but he couldn’t do anything in front of goal. 6.25.

Dani Olmo – Not really involved in the match, as he was rather contained by Mittelstädt. 5.25.

Timo Werner – He tried to make things happen as he drifted wide to either wings. But he was constantly tracked by Boyata, and thus contained. 5.

Patrik Schick – Kept quiet throughout the game, but did well to get the shot away which led to Jarstein’s horror own goal. 5.

Subs:
Angeliño – Did well after coming on, especially defensively, most notably when his last-ditch challenge prevented Cunha from scoring. 6.75.

Tyler Adams – Did very well down the right, both defensively and in terms of going forward, with his darts up the right flank. 7.

Ademola Lookman – Was very lively after he came on, as he was posted on either flank for a while. But he made a silly error to give away the penalty. 5.75.

Team – Leipzig never really managed to get into the game, as their attacking players were contained very well, and all of their attacks were quickly broken down. After the red card, they will not be too unhappy about getting a draw, but 10 draws in a season does not seem fit for a side who want to challenge for the Meisterschale. 6.

Rune Jarstein – He played well throughout the first half, making decent saves and sweeping up when he had to. But he made a horrendous mistake for the second goal, which cost his side. 5.

Peter Pekarík – Was solid defensively down the left, as he kept the threatening Nkuku quiet. Made forays forward late on, but couldn’t do much there. 6.75.

Dedryck Boyata – Did very well to contain Werner throughout the match. 7.5.

Jordan Torunarigha – He was solid defensively, and made a couple of crucial last-ditch tackles to bail his side out. 7.

Marvin Plattenhardt – Got an assist from the corner for the first goal. but unfortunately had to be taken off thereafter due to a head injury. 7.

Per Ciljan Skjelbred – He was strong in holding midfield, but he couldn’t make things happen in possession. 5.5.

Marko Grujić – Got a simple tap-in from the corner, but did well to guide it into the net. Was strong in defensive midfield thereafter, as he made lots of important challenges to break down Leipzig’s attacks. 7.

Dodi Lukebakio – He was a constant threat down the right, but failed to make anything happen. 5.5.

Vladimír Darida – Was strong in midfield, as he strung together his side’s attacks and made crucial interventions. 6.5.

Matheus Cunha – He was a constant threat with his pace and control and always. His silky feet earned Halstenberg a red card, and also later got his side a penalty. 7.5.

Vedad Ibišević – He didn’t have a great game, as he was either offside or not socially distanced from the Leipzig defence. 4.

Krzysztof Piątek – Didn’t do much initially after he came on, but then slotted the penalty calmly. 6.25.

Javairô Dilrosun – He was very lively ever since he came on, as he made darting runs down the left, and finished them with threatening crosses. 6.75.

Maximilian Mittelstädt – Did well to contain Olmo, and was an asset in attack later on. 6.5.

Team – Hertha looked good for most of the match, as they contained Leipzig for the majority of it. They were strong defensively, and managed to carve out a couple of good chances against the league’s best defence, but in the end, it was an individual error which cost them. 7.

Leipzig drop points in 2020 yet again. They’ve now dropped 15 points at the Red Bull Arena this season. This probably spells the end of their already small title hopes.

Hertha, however, break into the top half of the table (albeit only until Köln play), which is probably where they will finish this season. It will be a strong base to launch their next campaign after a very shaky season.