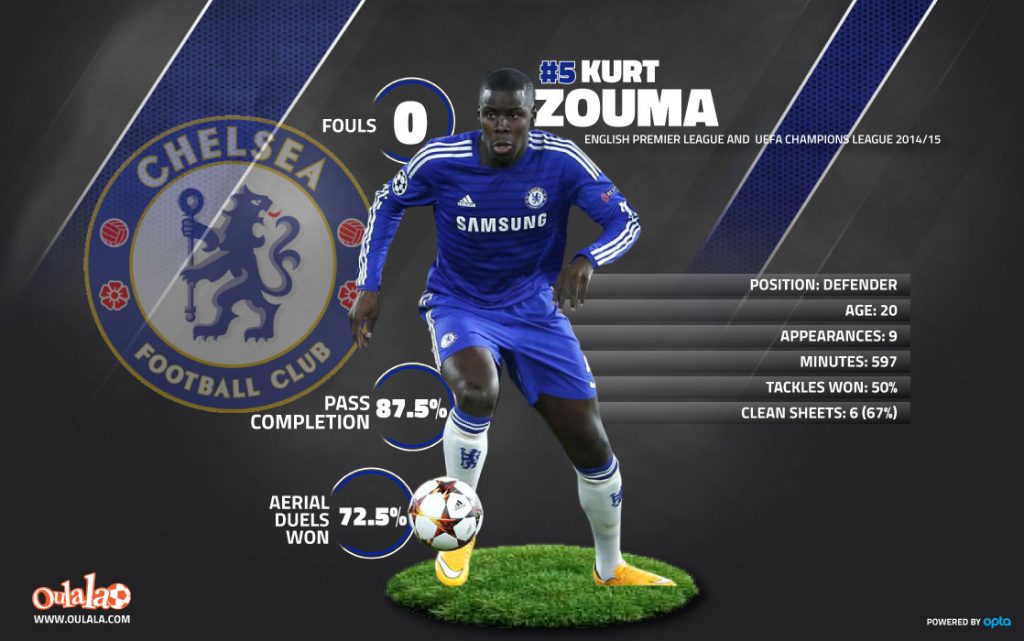 Zero fouls conceded in 597 minutes of football, for a centre-back… a young centre-back… is a very rare achievement, but it is something that 20-year-old Chelsea defender Kurt Zouma has accomplished.

After racking up his sixth clean sheet in just nine appearances against Everton on Wednesday night, Opta powered fantasy football game Oulala decided it was time that they took a closer look at the young Frenchman’s performance statistics, specifically in the Premier League and Champions League this season.

Zouma’s 87.5% pass completion sits narrowly above the overall Chelsea average of 86%. The defender has completed a total of 297 passes in his 9 appearances, an average of 45.5 passes every 90 minutes.

The Frenchman’s tackle success of 50% again edges the team average of a surprisingly low 44.6%. At a height of 6ft 2 it is no shock that he is also well ahead of the overall team average of 56.3% for aerial duels won with an impressive 72.5%. His ground duel success is slighter lower, yet still superb, at a rate of 68.1%, again above the team average of 52.6%.

In his Premier League and Champions League appearances this term the 20-year-old has made 3 blocks, 6 interceptions and 24 clearances.

With comparisons already being made to legendary ex-Chelsea and France centre-back Marcel Desailly, from what we’ve seen so far of the young Zouma, the future appears very bright for Les Bleus…