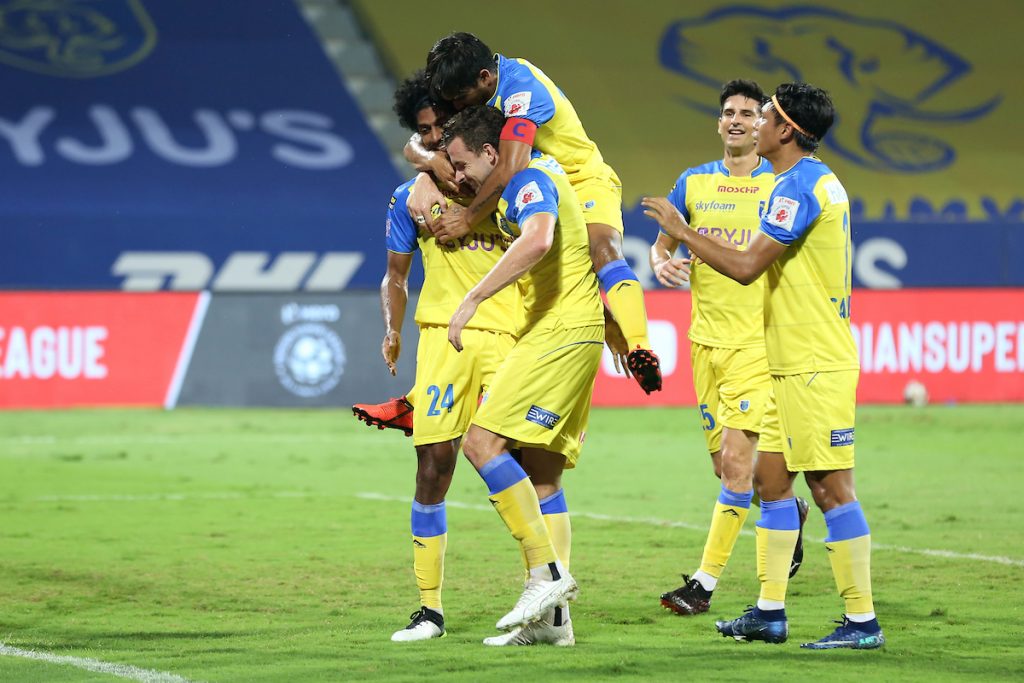 The final clash of the Indian Super League’s matchday 8 saw 9th-placed Kerala Blasters take on Hyderabad FC, who were just one spot above them in the table but six points clear. Kibu Vicuña’s side were still searching for their first victory of the season, while the Nizams were looking to get back to winning ways after seeing their unbeaten run end last time out.

An interesting battle was set to ensue, and here’s what we made of it:

Kerala Blasters started off well, but Hyderabad thought that they should have had a penalty in the first quarter of an hour when Nishu Kumar nudged Aridane in the box as the Spanish forward looked set to head a cross, but the referee saw nothing wrong.

In the 29th minute, Abdul Nediyodath climbed highest as he attacked a corner and thumped his header home, scoring in his first start of the season. However, the goal was not without controversy either, as replays showed the ball went out off a Kerala Blasters player before the referee gave them a corner.

In the last minute of the first half, Ashish Rai got up the right flank and squared the ball across the face of goal for Aridane, who somehow failed to hit the target with what seemed to be a simple tap-in.

Five minutes into the second half, Sahal Abdul Samad controlled a long pass and slipped the ball to Jessel Carneiro on the left of the box, but the full-back opted to hit it first-time and ended up skying his shot. One minute later, Sahal got into a similar position, but he missed wide on this occasion.

In the 58th minute, Rahul KP let fly from the edge of the box and looked to be hitting the bottom corner, but Subrata Pal went down quickly and made sure to tip it away.

Hyderabad FC came very close to equalising in the 80th minute when Halicharan Narzary cut inside from the left ad let fly, but just missed the top corner. Seven minutes later, Francisco Sandaza went through on the right, but his finish was well-saved by Albino Gomes.

However, just a minute after that at the other end, the ball ricocheted off Adil Khan to break for Jordan Murray, who took his chance brilliantly on this occasion.

That sealed the three points for Kerala Blasters, who looked great in this 2-0 victory.

Kibu Vicuña made five changes to his starting lineup tonight as Gary Hooper, Costa Nhamoinesu missed out on the matchday squad altogether, but the new-look side worked very well as they helped the Spanish tactician get his first-ever ISL win after a strong display.

Sandeep Singh and Abdul Nediyodath started together at the heart of defence for the first time, and the centre-back pairing worked together brilliantly as they succeeded in keeping the Hyderabad FC attack quiet for most of the match. The midfield pairing of Vicente Gómez and Jeakson Thounaojam looked solid as well, while Rahul KP excelled on the wing and Sahal Abdul Samad didn’t look too shabby either.

All of these strong individual performances contributed to a solid team performance, as Kerala Blasters looked very good from the very start and deservedly took a first-half lead. They had a number of great chances in the early stages of the second period to double their lead, but some poor work in the box by Jordan Murray and sub-par finishing from others meant that they couldn’t get any comfort with regards to the scoreline. Late on, though, Murray did take his chance, so the Tuskers comfortably bagged the three points in the end.

Welcome to season 7, @KeralaBlasters. Finally! And well done to the coach. Some really gutsy calls and his team responded and how. #KBFCHFC #ISL

This was a surprisingly solid performance from Kerala Blasters and one which might be the start of something good for them.

After losing their first match of the season against Mumbai City, Hyderabad FC failed to bounce back tonight following another disappointing display.

Kerala Blasters were fielding a new-look centre-back pairing, but it was Hyderabad FC’s defence that looked by far the shakier. They did have a couple of decent chances in the first half including a penalty shout, but for most of the period, they found themselves defending. Even then, the goal must have been hard to digest considering the fact that they should have had a goal-kick before it.

In the overall balance of things, however, the Nizams did deserve to concede. Their usually-bright young Indian contingent didn’t look any good tonight, as Liston Colaco, Hitesh Sharma, Mohammad Yasir and Asish Rai disappointed in particular. Aridane wasn’t on top of his game either, as he missed a couple of huge chances, while Chinglensana Singh didn’t look as rock-solid as he has in the last few weeks.

Hyderabad FC’s second-half showing wasn’t too dissimilar from the first – marked with missed chances and a poor goal conceded. After two losses in two, they will surely be looking to bounce back to winning ways quickly.

Kerala Blasters stay in 9th place after their first win of the season and first ISL victory since mid-February, but the gap between them and 8th-placed Hyderabad FC has now come down to just three points. Abdul Nediyodath netted his first goal of the season in his first start, while Jordan Murray got his second to seal the win for the Tuskers.

Kerala Blasters face Mumbai City next in 2021’s first ISL match on the 2nd January, while Hyderabad FC face FC Goa in the last ISL fixture of 2020 on the 30th December.