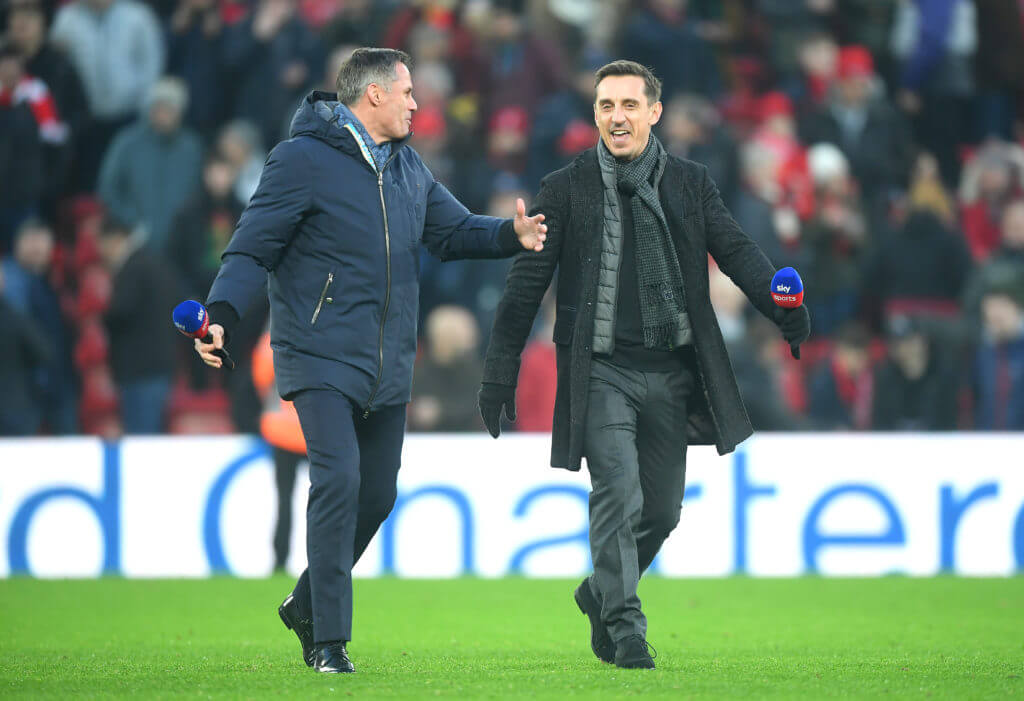 Both Jamie Carragher and Gary Neville have predicted that Liverpool will retain their Premier League title this season.

The Reds are leading the Premier League table after 14 games, and both the Sky Sports pundits feel that Jurgen Klopp’s side would run away with the title once again.

However, the race for the top four is extremely competitive this season, with at least eight teams fighting to force their way. The likes of Leicester, Everton, Southampton, Chelsea, Tottenham Hotspur, and Aston Villa are all separated by fine point margins.

Carragher and Neville have predicted that both the Manchester clubs – Manchester City and Manchester United – will ‘definitely’ finish within the top three.

Neville feels that the fourth place is up for grabs, and there could be a strong competition between Chelsea and Spurs to secure the final Champions League spot.

“I think City and United will definitely finish in the top 3. The last one…I think it would be Chelsea or Tottenham, it’s flip of the coin to be honest with you,” said Neville on Sky Sports.

Carragher also feels that Manchester United have enough depth and quality in their side, and the Red Devils should finish within the top three. He feels Chelsea will edge Spurs out for the fourth spot.

The former Liverpool defender said: “Yeah, I think United will. I think they’ve got a lot of attacking powers, think it’s fantastic. Actually, I looked at the bench at the weekend against Leeds…they’ve got a really strong squad. Manchester United, you always fancy them to score goals in games really, so I think they would be there.”

Manchester United have bounced back strongly in the league after a stuttering start to the season. Although they do at times give the impression of a side that are badly in need of surgery, the Red Devils have done really well in recent games.

They have won six of their last seven Premier League games, and could find themselves just two points behind Liverpool should they win their game in hand.

Moreover, United can prepare well for a genuine Premier League title challenge having been knocked out of the Champions League group stages. Having said that, it’s a bold prediction from both the pundits.

City, meanwhile, are eight points behind the Reds, having played a game less. Pep Guardiola’s side have struggled for consistency, but given the wealth of quality they possess, they are likely to be in the top four as well.