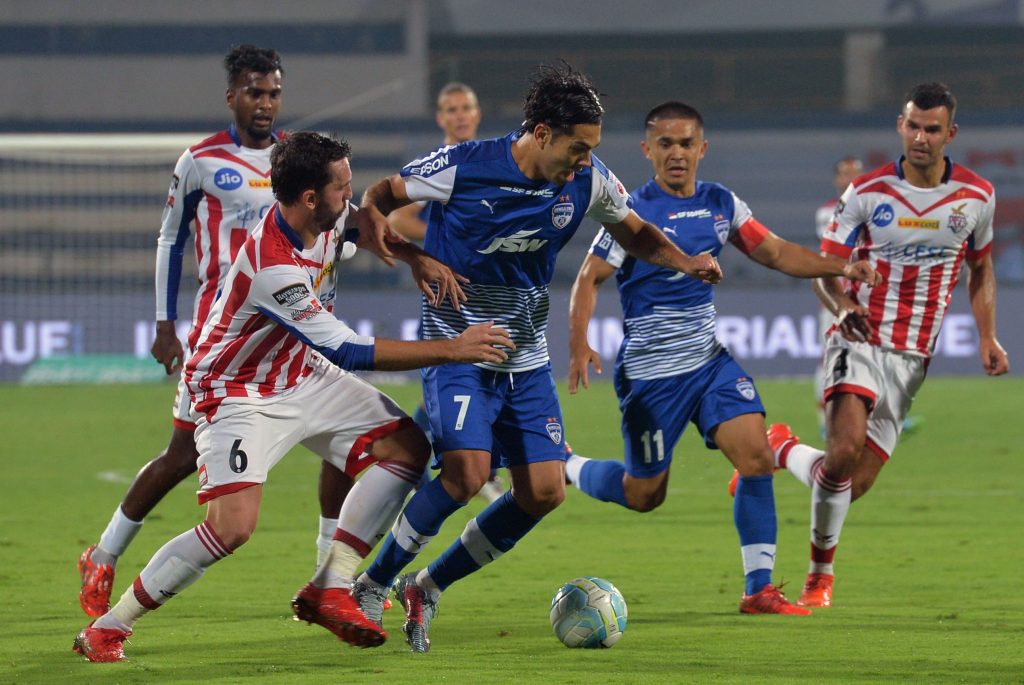 The eighth matchday of the Indian Super League is just around the corner, and it includes some exciting clashes between ATK Mohun Bagan and Bengaluru FC and a few other things to look forward to. Here’s all you need to know before matchday 8:

The action kicks off with a match between the 2nd and 3rd-placed sides in the league, as ATK Mohun Bagan face Bengaluru FC.

ATKMB didn’t feature on matchday 7, so their last match was a 1-0 victory over FC Goa thanks to Roy Krishna’s late penalty.

Bengaluru beat Odisha FC 2-1 as Sunil Chhetri and Cleiton Silva got on the scoresheet.

Bengaluru had a 5-2 lead over the old ATK, as only one match between those two teams failed to find a winner. During their time together in the I-League and in a few other cups, Mohun Bagan managed to get a 5-4 head-to-head advantage over Bengaluru, while five of their clashes were drawn.

ATKMB could finish the matchday at the top of the table if they win by three goals and Mumbai lose.

Bengaluru need to win to leapfrog their opponents and make second place their own until the new year at least.

Roy Krishna – You just can’t afford to take your eyes off this man, because he just can’t stop scoring. He has scored in five of the six matches his side have played, getting all but two of their goals. Perhaps their over-reliance on the Fijian forward might come back to bite them if he has to miss any matches, but for now, he’s just going to keep terrorising defences.

Odisha fell short against Bengaluru as they were beaten 1-2 in spite of Steven Taylor’s equaliser.

NorthEast too tasted defeat, as they lost against Jamshedpur FC because of the only goal of the match.

Both of last season’s clashes ended in a 2-1 home victory, so there is nothing to split these two teams in terms of head-to-head comparisons.

Odisha could go up to 9th and stay there if both East Bengal and Kerala Blasters drop points.

NorthEast have the chance to finish the matchday in 3rd spot with a win, but failure to do so may well see them drop below the playoff spots.

Benjamin Lambot – Both Odisha FC and NorthEast United haven’t exactly been prolific of late, as they have one and two goals respectively in their last three matches. However, one area where the Highlanders have the edge is in defence, as Odisha FC have conceded 33% more goals than them. Benjamin Lambot is a key fixture in their defence, and he’ll need to maintain his average of 5.9 clearances and 2.5 tackles and interceptions per match if his team are to get anything from this game.

5th-placed Jamshedpur FC, who are unbeaten since matchday 1, take on 7th-placed FC Goa in the last clash before Christmas.

Jamshedpur edged past NorthEast United thanks to Aniket Jadhav’s strike.

Goa have a comfortable 5-2 lead over Jamshedpur, as only one match between these two sides has been drawn. The Gaurs have a 5-1 aggregate victory from last season, but they lost one of the matches by the only goal.

Jamshedpur need to better NorthEast United’s result to get into the top four, preferably by winning which would give them an outside shot at the final podium spot.

Goa still have a tiny chance of breaking into the top-four, but a win would at least guarantee sixth place.

Peter Hartley – The strong English centre-back was monstrous in defence yet again versus NortEast United, as he helped his side earn a clean sheet with 6/9 successful aerial duels and 4 massive clearances. He’ll come against Igor Angulo most probably in this match, and the ex-Sunderland defender will need to be at his sharpest to keep the goal-hungry forward quiet after he failed to score in his last two appearances.

10th-placed SC East Bengal, who are still without a win in the ISL, meet 8th-placed Chennaiyin FC in the final weekend match of 2020.

East Bengal suffered late heartbreak in a 1-1 draw against Kerala Blasters after Bakary Koné’s own goal gave them the lead.

Chennaiyin missed many chances against FC Goa but managed to come away with a 2-1 win even then as Rafael Crivellaro and Rahim Ali got on the scoresheet.

This will be the first-ever meeting between these two sides.

East Bengal would need to win and hope that Kerala fail to do so in order to move one spot up in the table.

Chennaiyin have a minuscule chance of finishing this matchday in the top-four, but that would take a lot of luck and a huge win.

Anthony Pilkington – East Bengal have found goals hard to come by – only Jacques Maghoma has scored for them while wearing a red shirt with two goals, while the only other goal came courtesy of Bakary Koné (a Kerala Blasters player). Anthony Pilkington is Robbie Fowler’s other foreign forward, and he has shown glimpses of brilliance while working extremely hard but is yet to find the back of the net. Can he do it against Chennaiyin?

9th-placed Kerala Blasters have a tough task in the final clash of the matchday, as they face 6th-placed Hyderabad FC.

Kerala needed a stoppage-time strike from Jeakson Thounaojam to salvage a point against SC East Bengal.

Hyderabad suffered a 0-2 defeat against Mumbai City, losing their unbeaten start to the season.

Kerala have a 6-3 aggregate victory from last season, but both sides managed to win their home match.

Kerala can’t possibly go any higher than they currently are after playing one match, but they will probably need to win to keep those below them at bay.

Hyderabad have a tiny chance of entering the top-three with a win, but that is quite unlikely.

Albino Gomes – At the time of writing, Albino Gomes has made 17 saves in this season’s ISL (two of which were penalties) – the second-highest tally in the league. At the same time, he’s also had a couple of absolute howlers, meaning that his rating has fluctuated between 1.5 and 8.5 in just six appearances. Last time out, he was simply outstanding, but which Albino Gomes will we see against Hyderabad?