A rambunctious start to his Premier League career saw all and sundry begin to tout Newcastle target man Andy Carroll for a call-up to the national side which, given the straw-clutching at the time, seemed like more of a denigration of manager Fabio Capello‘s senior front-line options than a fully fledged endorsement of the rangy striker’s obvious, if a little unpolished, talents.

At the tail-end of August, a hat-trick on his home debut against Aston Villa followed up by a headed equaliser against Wolves six days later had seemingly served to book Carroll a berth in Capello’s squad for England’s upcoming European qualifiers with Bulgaria and Switzerland but, alas, the call never came.

Fast forward a couple of months and Carroll is facing a near-same quandary, although this time with a few extenuating circumstances.

Considering that almost all of his preferential phalanx of striker’s are currently sidelined with varying degrees of knack, it would appear that Capello is prepared to call Carroll into his squad for next week’s friendly against France at Wembley.

However, the veteran Italian is also reportedly seeking advice from the FA as to whether calling-up Carroll would be viable, considering his ever-lengthening rap sheet. 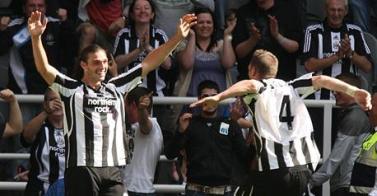 Since an alleged ‘bust up’ with England U21 coach Stuart Pearce on September 30th which saw him jettisoned from the squad, Carroll has appeared in court twice (both times on charges of assault), been forced to co-habit with Newcastle captain Kevin Nolan as part of his bail terms, seen his luxury £150,000 Range Rover torched on Nolan’s drive in an arson attack relating to his first assault charge and, if lurid tales in this weekend’s gutter press are to be believed, indulged in a spot of curfew-bending which may or may not have involved a certain strain of Colombian marching powder.

Oh, and he also managed to nab his side’s winner in a narrow victory over Arsenal, putting in a performance that left Arsene Wenger backing the growing calls for the 21-year-old to be afforded with an opportunity to make an impression at full international level:

“I think [he is ready to play for England]. He has presence, charisma, confidence and is intelligent on the ball. I had doubts about him when I saw him a year ago but he has improved tremendously.”

Plaudits don’t really come much higher than that.

Capello and the England general manager, Franco Baldini, are now expected to check with the Football Association (FA) that Carroll can be selected for the game against France on November 17th, on the grounds that it may not be overly wise to call-up a player with an ongoing court case hanging over his head.

Although, the thought of anybody seeking moral guidance from a rudderless organisation which is stuffed to the gills with greedy chancers, career sh*t-flickers and gloating ruddy-faced non-entities is laughable in itself.