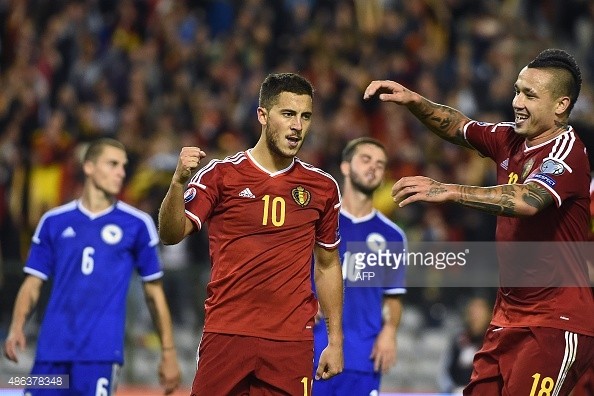 The international break has come to a close, and the Premier League will return at the weekend after a fortnight. The national teams battled it out in the Euro 2016 qualifiers this week, and there were some memorable matches and moments.

In this section, we look at how the Chelsea players fared in the last week. The Blues have been struggling for form in the league, finding themselves in 13th place in the table with just 4 points in as many games. The break though, could be just what they needed, with the players getting some time off to re-group and find some form.

We will break it down team-by-team, and analyse how good or otherwise Chelsea’s men were in the two games played.

Chelsea don’t have too many representatives with the English national side anymore, with Gary Cahill being the only regular in the first-team. The central defender, was left out of the side for the Three Lions’ trip to San Marino on Saturday, as Roy Hodgson opted to shuffle his pack. They won 6-0 though, and sealed their place in the European Championships in France next year.

Cahill did though, start and play the full 90 minutes at Wembley last night, as England beat Switzerland 2-0 and solidified their place at the top of Group E. On a night where Wayne Rooney became England’s all-time top goalscorer, Cahill was largely untroubled at the back.

With four full Spanish internationals, this is the country that is most represented in the Blue of Chelsea these days. Diego Costa, Cesc Fabregas and Pedro all started in the reigning European Champions’ 2-0 win against Slovakia on Saturday. Costa and Fabregas have both looked out-of-form thus far this season, and neither was able to impose too much of an influence on this one, before being substituted in the second half. The former did win a penalty which Andres Iniesta converted, as Cesar Azpilicueta was an unused substitute. Juanfran and Jordi Alba were preferred in the full-back positions, with the latter opening the scoring.

In their second game away at Macedonia, Vicente Del Bosque opted to bench all of Fabregas, Pedro and Azpilicueta. Costa started and played until the hour-mark, as Spain struggled to break down the resilient hosts. In the end, former Chelsea man Juan Mata made the difference, as his cross was deflected into his own net by Tomislav Pacovski.

Spain are now well on their to France next year, sitting pretty atop Group C.

Eden Hazard hasn’t had the best start to his season with Chelsea, but he scored twice in the week to bring Belgium within two points of Group B leaders Wales.

Thibaut Courtois and Hazard both completed the full 90 minutes in the two games against Bosnia-Herzegovina and Cyprus, which the Belgians won 3-1 and 1-0 respectively. Hazard won and scored a penalty in the first one, beating Chelsea teammate Asmir Begovic in the Bosnian goal in the process. Former Chelsea and current Manchester City player Kevin de Bruyne was also on the scoresheet, along with Man United midfielder Marouane Fellaini.

The goal against Cyprus though, was much more vital. It came four minutes from the end of the match, as a match that seemed headed for a goalless draw was won by Hazard’s close-range finish. Manager Marc Wilmots though, wasn’t too happy with the winger, calling him the worst player on the night.

There was heartache for Branislav Ivanovic and Nemanja Matic with their national side, as Serbia failed to qualify for the European Championships despite a 2-0 win against Armenia on Friday. Ivanovic captained his side in an empty stadium, after the Serbians were docked three points for the abandoned game against Albania last year. They are now in 4th place in Group I, 10 points adrift of the teams above them.

In their second game on Monday, Serbia lost 2-1 in a friendly to the hosts next year , France. Once again, Ivanovic and Matic featured, but were unable to prevent the defeat against the visibly better opponents.

Willian started Brazil’s 1-0 friendly win over Costa Rica, before being substituted 10 minutes from the end. He was the only Brazilian from the Chelsea contingent to feature in this game, with Oscar and Ramires left out.

The attacking midfielder also played from the start in Brazil’s second friendly against the USA on Tuesday, where a fantastic performance from Neymar saw them run out 4-1 winners.

Asmir Begovic, as mentioned earlier, played for Bosnia-Herzegovina in the 3-1 defeat by Belgium. He did though, keep a clean sheet in his second game against Andorra, which his side won 3-0. The Bosnians now find themselves in 4th place in Group B, and face an uphill task of trying of overhaul Isreal, Belgium and Wales above them.

In the qualifiers for the African Cup of Nations, new signing Abdul Baba Rahman and winger Christian Atsu both started for Ghana in their 1-0 win over Rwanda. The team managed by former Blues’ manager Avram Grant made it two wins out of two in their group.

Bertrand Traore suffered a slight knock and therefore did not feature in Burkina Faso’s shock 1-0 defeat by Botswana.