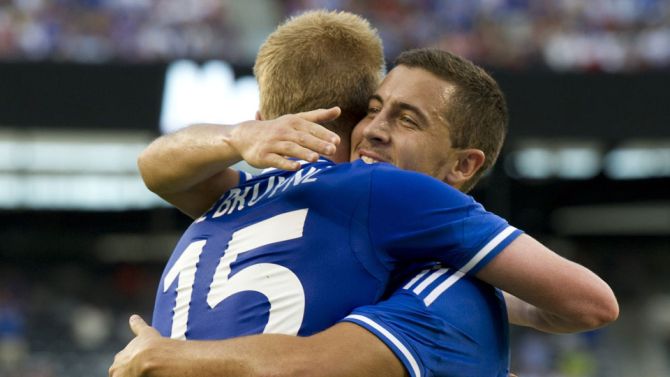 Chelsea star Eden Hazard has dropped a huge bombshell regarding the future of his club and national team-mate Kevin De Bruyne.

In an interview with Belgian newspaper Sportwereld, the Belgian star commented on the future of his Chelsea team-mate Kevin De Bruyne, saying it is better for him to leave the club if he is not getting enough game time at Stamford Bridge.

De Bruyne has really struggled to make a bright impression under Jose Mourinho and has been linked with a January loan move to Germany, with Schalke 04 and Werder Bremen all interested. Belgian coach Marc Wilmots had also expressed his concern over De Bruyne’s lack of game time and insisted of similar tips as provided by Hazard.

“If he does not play, it is better for him to leave. Playing a World Cup after having not played for a year, which is very difficult,” says Hazard on De Bruyne.

De Bruyne was included in the Red Devils’ last match against Colombia where his performance was well below par. Hazard feels, the attacking midfielder should depart from Chelsea and move to a club where he can play regularly and in that way Belgium can get the best out of the player.

‘Departures and play forward, that would be good for him and for the team. If we want to get the best from Kevin upwards it is better that he leaves. But he’s a big boy. He must make his own choices. ”

Hazard further spoke about the contribution of his national manager for his development and reveals that both of them share a very good understanding. He added:

“Marc is someone who listens and he sets me at ease. He saw that I had a hard time but found the right words. He knew what he had to say to me. Because we have good agreement with each other, can I give him back on the field. ”

Chelsea manager Jose Mourinho was in the stands on Thursday to watch Belgium in action against Colombia. When asked whether there was any extra pressure, Hazard replied he knew that Mourinho would come via journalists but that didn’t affect his game.

“Some said I played well because he was there. That has nothing to do with it. Whether he is or not, I play my game. ”

Hazard also spoke about his ambition for the upcoming World Cup. He says Belgium’s first priority will be to qualify from the group stage, but adds that they don’t need to afraid of any team as he feels the squad is good enough to play against anybody in the world.