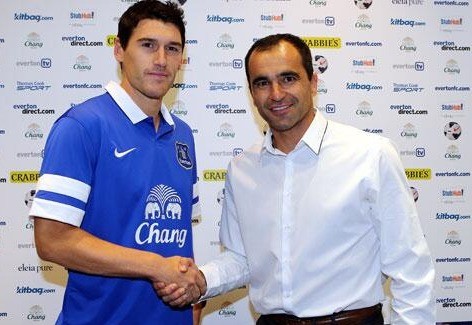 Gareth Barry has not given up hope of playing for England again and believes his loan spell at Everton may help his cause.

Barry, 32, joined the Toffees on transfer deadline on a season-long loan from Manchester City after it became clear he was not part of Manuel Pellegrini’s plans.

City bought Fernandinho, and Barry was already competing with Yaya Toure, Javi Garcia and Jack Rodwell for a berth in central midfield.

“I joined Everton to play regular football and that’s still my main target,” Barry told the club’s official website. “If an England call comes with that then fantastic.”

Barry has not turned out for the Three Lions since a curtailed sub appearance against Norway in a Euro 2012 warm-up friendly. He injured his groin in that game and missed the tournament.

Roy Hodgson has opted to select younger midfield legs in the form of Barry’s Toffees teammate Ross Barkley for the crunch World Cup qualifiers with Montenegro and Poland.

Everton were unbeaten under new manager Roberto Martinez until Saturday’s defeat to Manchester City. Barry missed this match as he was ineligible against his parent club.

Barry did make his 500th Premier League appearance in the 3-2 win over Newcastle United on Monday, however.

“I’ve always said that I want to play as long as possible and as long as my body and legs allow me to do so,” added Barry.

The loan spell at Goodison Park has already brought Barry plaudits. Many commentators hailed his block of Samuel Eto’o’s goal-bound shot in the 1-0 victory over Chelsea last month.

Barry has 53 caps for England and three goals. He went to Euro 2000 under Kevin Keegan and was part of Fabio Capello’s squad for the 2010 FIFA World Cup.