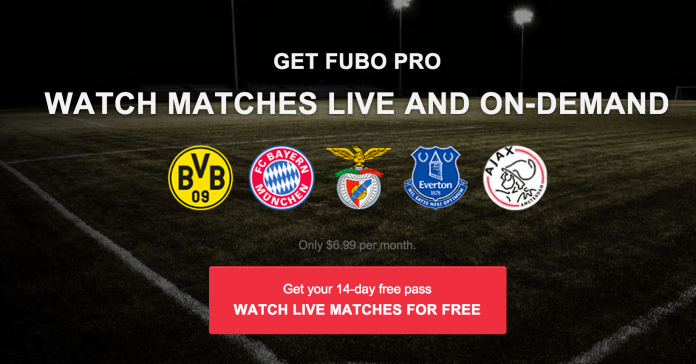 Sports streaming services appear to be all the rage of late. Companies such as ESPN3, Fox Sports Go and now Fubo.TV – delivering access to both live and delayed football matches. These services allow viewers the freedom of watching games they could not attend when live.

This service allows you to watch live matches and re-run previous matches as well as match highlights for select football teams.  You can watch all of Bayern Munich and Borussia Dortmund’s matches here.

There are also weekly TV shows from the likes of Everton, Ajax and Borussia Dortmund.

Everton TV is a 3-hour weekly show which offers news, highlights and exclusive behind-the-scenes footages from one of England’s most-famous clubs.

BVB TV offers a weekly show for 40 weeks of the year where you can see behind the scenes of one of Germany’s most famous clubs, as well as news updates and more.

Benfica TV is the first and only club channel to broadcast live games from a professional football club of the team itself.

You may want to flick over to Ajax TV where you can watch an episode each week through 40 weeks of the year, featuring news, highlights, classic matches and much, much more.

It claims to be the largest collection of the latest football videos, match highlights, interviews and behind-the-scene footage, as well as offering live audio on the website.

So if you’re a fan of either Everton, Benfica, Ajax, Bayern Munich or Borussia Dortmund living in the United States or Canada you may wish to subscribe to Fubo.TV today.

Sign up for free at Fubo.TV to start your free 14-day pass and catch the return of the German Bundesliga as VfL Wolfsburg host Bayern Munich today. It is $6.99 thereafter for unlimited viewing.