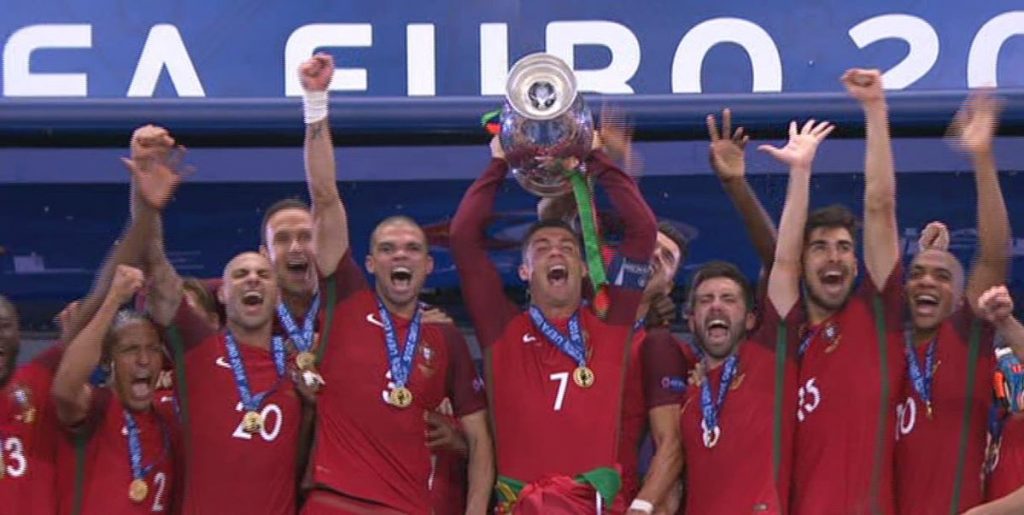 Lille striker Eder scored a sensational goal from 25 yards in the second half of extra time as Portugal beat France 1-0 to win the Euro 2016 Championships at Stade de France in Paris.

After a cagey opening five minutes, Nani nearly gave Portugal the lead. Right-back Cedric hoofed a long pass over the top to Nani, who did beat Koscielny on pace, took the ball down on his chest but couldn’t keep his shot on target from 15 yards.

Dimitri Payet from the left wing played a delicious pass over the defence to pick Griezmann, who tried to lob the ball with a first-time header from just inside the box, but Rui Patricio was equal to the task as he parried away the danger.

Then came the most unfortunate moment of the match for Portugal. Payet made a strong challenge on Ronaldo, it was a fair tackle and caught him on the follow through, and despite the Real Madrid star trying everything he possibly can to stay on pitch, in the end. left the pitch on the stretcher with tears in his eyes. 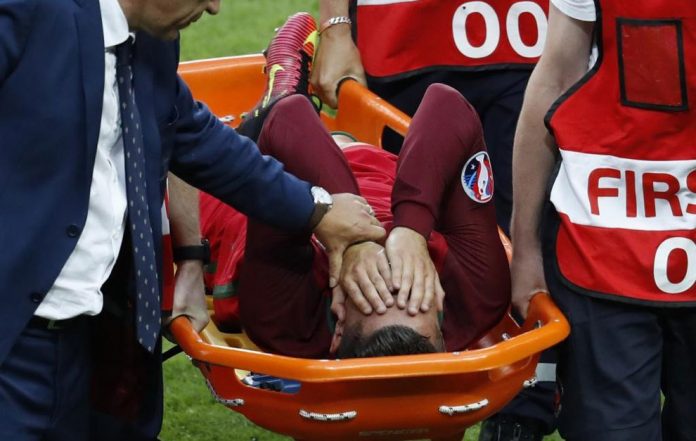 Nobody wants to see a player getting injured in a final and it was really disappointing to see Ronaldo, one of the greatest of this generation, leaving the pitch in such a manner. He was  applauded off by both sets of fans, and Didier Deschamps comes over to wish him well as he is taken down the tunnel.

France came close to scoring through Sissoko. The Newcastle star made a couple of devastating runs in the box and this time made a sweet turn in the box to hit straight at Patricio.

Towards the end of the half, Portugal enjoyed a decent spell with Nani, Joao Mario and Quaresma tried best to engineer few smart moves but Lloris wasn’t tested.

Portugal went into defensive shell completely. From a corner, Patricio came a long way to take it off from a French player but could only grab it in the second attempt.

Moments later, Pogba tried his luck from 30 yards out, but his long-range effort went sailing over the bar.

In the 56th minute, Joao Mario’s flat cross from the left was aimed towards Quaresma in the box but it was headed behind by Umtiti on the six-yard line.

Deschamps took off Payet and introduced Kingsley Coman in an attempt to inject pace from the left. Payet enjoyed a great tournament but will be always remembered for his tackle on Ronaldo.

Coman nearly grabbed an assist, as he produced a brilliant cross from the left but Griezmann couldn’t keep his free header on target from six yards out.

Patricio came to the rescue party again after he denied Giroud from close range. Coman played a lovely little pass into the box for Giroud, who hit an excellent left-footed shot towards the far bottom corner that was palmed away by the Portuguese goalkeeper.

In the 80th minute, Nani’s mishit cross almost caught Lloris in surprise and he had to backpedal to flap it away. The ball fell to Quaresma, who followed up with a scissor-kick but went straight into the hands of the Spurs goalkeeper.

Patricio had been phenomenal for Portugal, with six minutes left from the normal time, he produced a stunning save to deny a scorcher from Sissoko.

France almost had won the match in the stoppage time – Gignac did a sharp turn, beats his marker but shoots against the post.

In the second half of extra time, Rafael Guerreiro rattled the crossbar from 25 yards out. Moments later, Portugal finally broke the deadlock when Eder scored from 25 yards out. He slammed one into the bottom-left corner leaving Lloris no chance of saving that.

Portugal held on at the final whistle and defeated France for the first time since 1975 to win first ever Euro championships. Cristiano Ronaldo lifts the trophy for Portugal but in reality, Portugal team-mates won the Euro’s for the Real Madrid superstar tonight.