Footbo, a new social community network for football fans from all around the world has launched, providing users with access to team and player profiles, blogs of other users as well as football personalities, predictions and much more…

Created for and by supporters of the game, Footbo.com is the online international network entirely dedicated to football. This niche platform has been designed to enable world-wide interaction between those sharing an interest in the beautiful game, and has initially been launched in English, German and Spanish.

Upon joining the site, users can personalise their profile page by identifying their favourite teams and players, and can choose their top 11 players. From that point on, the world of Footbo will be at their fingertips. The latest news and content, updates on fixtures and results, game predictions and player gradings, and groups and fan clubs are all part of the Footbo set-up. 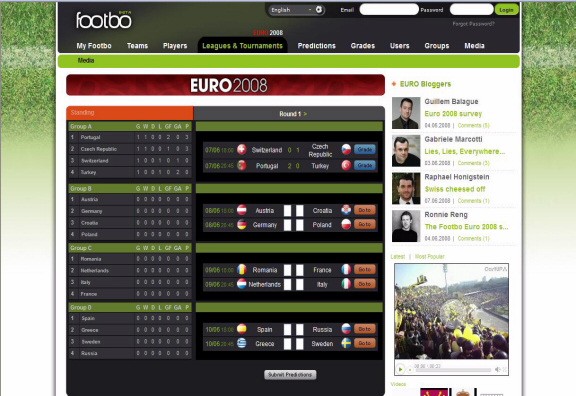 Each team and player has a Wikipedia style profile, which can be edited and added to by users of Footbo, where the option exists to integrate pictures and videos into the body of the text profile. Why only read about a great winning goal, when the possibility exists to watch it as well?!

Also, Footbo enables its users keep updated on the thoughts and views of football analysts such as Rafi Honigstein, Guillem Balague and Gabriele Marcotti in such a way as to enable every fan the opportunity to interact with those professionally involved in the world of football.

Providing data on most of the leagues around the world, this site has something for every football fan and more. The only thing that’s left to make the community flourish is for football fans to visit www.footbo.com and to sign up!