“No other man-made device since the shields and lances of the ancient knights fulfills a man’s ego like an automobile.” – Sir William

Who is (was) Sir William you may ask….to which I have no answer, but we must agree that he was right on the money with that one! Not that anyone could suggest, even in their wildest dreams, that the modern professional footballer is in need of too many ‘extras’ to massage his ego. But let’s not get off to an over-critical beginning here…for who amongst us could deny the testosterone fuelled thrill of our first driving experiences?

My first car was a Triumph Dolomite with a truly monstrous 1750ccc engine and the more I screeched around the neighborhood (sometimes in excess of 60mph!), the more I was convinced that the local babes wanted a ride. Not necessarily to experience the speed thrill you understand. No, my thinking was much more ‘back-seat’. I mean I was an average guy but in this new world I was easily convinced that I had suddenly become ‘King Dong’.

And yes, there was plenty of competition, some even had better looking wheels than my rust bucket, but hey!….people recognized class when they saw it didn’t they? I was the next James Hunt in the making (read Jensen Button if you’re under 30) and I knew that the babes recognized this!

But which of us, given the means, would not splash out on the ultra bling that is the modern super car? I know I would, even now…and I struggle to remember my twenties (a sign of good living that!) but there’s no question I definitely would have then!

And of course our footballing heroes don’t let us down in this regard. Isn’t part of the whole thing in how we choose our heroes related to them actually living some of our dreams?

So let’s take a look at footballers and their cars, the good, the bad and the ugly. We’ll take a voyeuristic peek at who has what before crossing over to the dark side. Boys will be Boys and when it comes to footballers and cars…they certainly are! 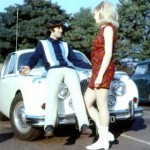 When I grew up players didn’t have that much cash or any car finance deals. The maximum wage was only abolished in 1965 and super stardom (wealth) was some way off.

The sixties were in full swing and Rock and Roll and Bestie went together like, well….Mercedes and Benz, and Bestie liked his flash cars, had an eye for a good chassis and never failed to get under the bonnet! Jaguar was his brand of choice and he was famous for his E-Type Jag as well as other models (by that I mean the Mark 2 and several Miss Worlds).

Yes, George started the ball rolling and it has gained momentum (and horsepower) ever since. But due respect to the man who was the pioneer of it all! (Shocking word choice that!)

Bestie started it all!

“The car has become an article of dress without which we feel uncertain, unclad, and incomplete.” – Marshall Mcluhan

There was a time when Audi sponsored Bayern Munich and all their players drove Audis as part of the deal (donated free no doubt!) However, such a policy would be scorned upon today…far too restrictive when you consider the choice of mean machines out there.

What’s remarkable, or maybe not, is that most of today’s lot have not just one but many cars.

And the ‘king of bling’ has more than most. Let’s face it….LA expects and with a wife called Victoria you’ve gotta have a few ‘Posh cars’! Yes, it’s Beckham I refer to and I could write the whole article on his car fetish…but it’s easier to direct you here:
Becks’ Posh Cars.

Back at Old Trafford Wayne Rooney is no slouch either! A Porsche 911 was his 19th birthday present to himself and wife Coleen bought him an Aston Martin Vanquish as a good luck present before the last World Cup (worked like a charm that!) Rooney’s collection also boasts a BMW X5, a Mercedes CLK, a Cadillac Escalade, a Chrysler 300C and an Audi TT. Yes, that’s 7 in all, one for each day of the week I presume.

And here is just a sample of how some other stars splash their cash: 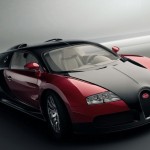 So as you scramble together the money for a pint and a pie at half time when you’re next at a game, you can take comfort in knowing that your hard earned cash is keeping your favourite player in a set of wheels worthy of his status. On the other hand you may be a bit pissed-off knowing that you’re funding something that only gets a run-out a couple of times a month……but you can at least take solace in the fact that it will look damn flash when it does!

Suffice to say that our footballing heroes are just mere mortals like the rest of us.

And, yes, there really is a game of car football. Two Ferraris up against two Subarus is something of a concern though….a bit like Chelsea v Scunthorpe in the Cup really! But anyway…
Car Football.

So what’s your steer on the subject? Is your mind racing with comments or have you drunk too much to even consider getting behind the keyboard?

OK, I know that’s weak….you could say I’ve crashed and burned! Time for a service…or maybe a trade-in!