Football accumulator bets are very popular among punters because they stand the chase of winning a significant amount of cash from a low stake.  Generally, the more lines you add to your accumulator – the bigger the odds.  There have been many stories year after year that even make the news because of the significant sums reached or late drams involved in winning such a large sum.

It is often considered a better get rich quick scheme than lumping large amounts of cash on singles bets, because you stand to lose significantly less money if your accumulator doesn’t come in, whilst you also stand to win much a much greater returns if all of your selections win. 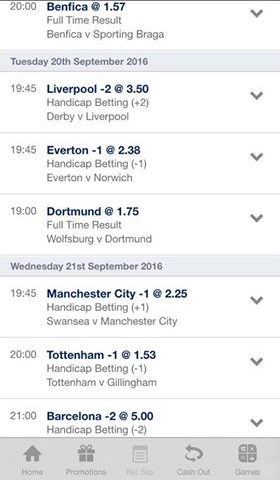 What is an Accumulator?

An accumulator is a bet that combines four or more selections in a single wager that gains a return only when all the selections win.  The increased risk is rewarded by the potential high returns.

Any selections that are a push are calculated as though they were not part of the accumulator, therefore a four-fold would become a treble for example.

More than one selection from the same event cannot be combined in an accumulator.

Casual punters who prefer to play with only £5, £10 or £20 each week often prefer an accumulator over a single as the opportunities to pay for a holiday with one bet are much better than placing the same wager on a selection of singles over a period of weekends.

An accumulator is a bet of four or more selections.  Fewer than four selections do work in the same way but they just have a different name:

An example of the odds for an accumulator are as follows:

The punter in this example placed a £90 bet on his four-fold, so the calculation is as follows:

How to Calculate Your Accumulator Bet Returns

To calculate your potential accumulator winnings, simply multiply your stake by the odds of each selection.  For example:

Some like to hedge their bets by backing their six-fold as doubles or trebles as well, meaning that if two, three, four or only five of their selections come in, they can still make a profit.

How to Pick Accumulator Tips

Just as you would pick any single bet you decide which events are most likely to happen in a selection of sporting events and add them into your accumulator.

For example, if you are confident that Barcelona will beat Sevilla, Manchester United will bet Bournemouth, that there will be lots of goals in the Liverpool-Arsenal match and that Bayern Munich will beat Borussia Dortmund, you can select these bets together in a four-fold accumulator.

Sometimes your decisions may be based on statistics, form, head-to-head or simply a gut feeling.  It can often be the long shots that make your accumulator’s odds worthwhile and the heavy favourites that let you down.  If you are confident in one team thrashing another, you may add them to your accumulator as an Asian Handicap bet, for example, winning with a -1.5 goal deficit.  Draws are great odds but often the most difficult to predict.

Remember, the higher the odds of each selection, the greater the return.  It is often considered not worth adding events at such short odds in case of an upset – the risk often isn’t worth the small reward.

Accumulator Free Bets to Get You Started

Signing up to a new bookmaker comes with the reward of a free bet.  Usually it is the case of making a deposit and you will be matched with a free bet worth 100% of your deposit, up to a pre-defined limit.

These free bets can be used on your first accumulator or can even be split into several accumulators.  For example, if you had a £100 free bet with a new bookmaker, you could simply do 20 accumulators worth £5 each.

Ahmed Bilal created Sportslens in 2006. He is a business consultant and entrepreneur who helps businesses identify and overcome their biggest challenges. He’s also the founder of Football Media, an online advertising agency that specialises in sports and male audience targeting, with a monthly reach of 100m+ sports fans in the UK and US. He’s also the previous owner of Soccerlens.com – a sports news site that reaches 3m+ readers / month.