Mesut Ozil has hit the ground running with Arsenal.

Just in case you’ve been living under a rock, Arsenal midfielder Mesut Ozil has taken the Premier League by storm.

Nobody so far this season has made more assists than Ozil in England’s top flight after his club record transfer to the Gunners on deadline day from Real Madrid.

The supply line provided by Ozil has been put to good use as Arsenal top the table. Joined by compatriots Per Mertesacker and Lukas Podolski at the Emirates Stadium, he has quickly adapted to life in London.

“It’s to the detriment of any team selling a Mesut Ozil,” said Germany and former Madrid teammate Sami Khedira.

La Liga’s loss has been a major gain for the Premier League. Soccerlens looks at five fellow German footballers who could make a similar impact to Ozil in England.

Holtby has, however, been a regular in the early stages of another Europa League campaign at White Hart Lane as the above goal illustrates.

International recognition so far amounts to three senior caps. Holtby did skipper Germany’s Under-21s in Israel over the summer at the European Championship, albeit unsuccessfully.

Playing and training with the likes of Christian Eriksen and box-to-box powerhouse Paulinho will improve his game.

A pair of talented youngsters that recently scored their first goals for Arsenal. Sound familiar? Going forward Arsene Wenger will be hoping Eisfeld and Gnabry are cut from the same cloth as Ozil.

Gnabry, 18, has benefited from Theo Walcott’s injury and broke his Premier League duck with this effort against Swansea:

Eisfeld, 20, meanwhile arrived from Borussia Dortmund in January 2012 with a prodigious reputation.

An attacking midfielder like Ozil, Wenger compared Eisfeld to Robert Pires following his display in the League Cup match with West Bromwich Albion. 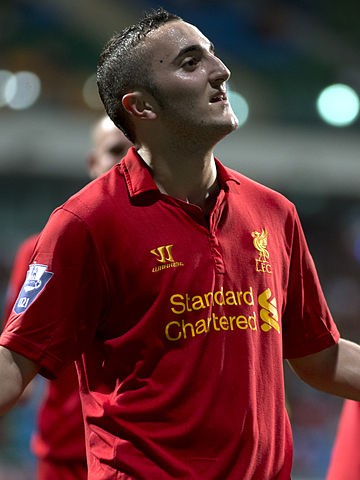 Teenage Liverpool striker Yesil has just returned from an ACL rupture. A prolific goalscorer for Germany’s Under-17s and Under-19s, he will hope to reproduce that form in the Professional Development League.

Brendan Rodgers has used Yesil in League Cup games before. Whilst at the moment there seems to be no route into the first-team at Anfield, speculation constantly surrounds the future of Luis Suarez.

Daniel Sturridge is the club’s only other senior out-and-out striker. Should he get injured, Yesil may be pressed into service on Merseyside.

You probably haven’t heard of this Fulham teenager, but much has been made of the ageing midfield legs used at Craven Cottage by Martin Jol.

Derek Boateng, Giorgos Karagounis, Scott Parker and Steve Sidwell are all thirty-somethings. Mahamadou Diarra may also be signing a pay-as-you-play deal in West London, but fits into the same category.

If Jol were to blood young Minkwitz he would inject some much needed energy in the middle of the park for Fulham. He can take heart from the fact that other academy graduates Matthew Briggs and Alex Kacaniklic have been involved in the first-team this term.