And that’s how we shift our attention to Liverpool and the mess they are in. Finally a candid confession from Rodgers after Liverpool’s Champions League exit – symptoms are apparent, does he have the remedy remains to be seen.

It wasn’t supposed to be what it is today. Failure to win the Premier League last season was seen by many as a golden chance wasted, but Rodgers didn’t see it as a psychological barrier, rather, he vowed to return stronger.

“What it has done with this team and this group, it has made us even more unified and stronger to be more successful in the future. I’m super hungry to be a champion and succeed and we have shown we have the credentials to do that,” said Rodgers.

Is that what you had envisaged Brendan? Title race over in September? Check. European dreams dashed in December? Check. Defeat at Old Trafford on Sunday and Liverpool to kiss good-bye to top four? Check.

And it is on this pretext, a whirligig of uncertain future and resounding premonitions, Liverpool head to Old Trafford to face their arch rivals Manchester United, looking to turn the vicissitudes in their own favour.

Stats-wise United will start as clear favourites. Third in the Premier League, six wins out of eight at home (one draw), five straight league wins – the platform is set before them to not only take a massive lead from their potential challenger, but destroy them mentally for good.

Then again, when did stats took centre-stage in a high voltage clash like this? The Manchester United – Liverpool fixture is still the most anticipated rivalry in English football, soaked in glory, history and tradition. These are games where passion predominate over any other things (read as tactics) and often the outcome of the fixture depends on the team that show more desire and hunger to win.

Team selection has to be spot on

Rodgers has come under lots of criticism for his poor (and often negative) team selection this season. Injuries to key players have had a detrimental effect, but he kept on rotating the squad unnecessarily. His team selections are no longer interesting, but baffling in most cases.

For example, Enrique’s inclusion in the first team against Basle on Tuesday night; the Spaniard hasn’t played enough this season, yet he was picked in a must-win-game for Liverpool. And Enrique came up with one of the poorest performances ever by any Liverpool left-back in the last decade!

Rickie Lambert was complaining about lack of game time early on, but now the 32-year-old has almost played entire 90 minutes in the past five games. He has been over used and it has resulted in his sharp drop in form and fitness.

It will be interesting to see, how Liverpool prepare themselves up tactically for this game. Rodgers has mainly used the 4-2-3-1 formation, using a lone striker upfront. However, with Lambert failing to impress, in the last couple of games, will Rodgers try using Sterling upfront or implement a diamond system?

Markovic had really let the team down by picking up an unnecessary red card against Basel. The young Serbian forward, who joined from Benfica in the summer, had struggled to adjust in his new club but looked threatening when he came on as a sub against Basel, and although the cameo lasted only 15 minutes, he looked sharp and lively. Rodgers must give him another chance to impress and therefore should be included in the squad on Sunday.

Use the pace of Sterling effectively

Sterling has been Liverpool’s best player this season and to use him effectively will be key. United’s defence is the weakest spot Liverpool (well, ironic though) can exploit, especially with Ashley Young playing as left-back. 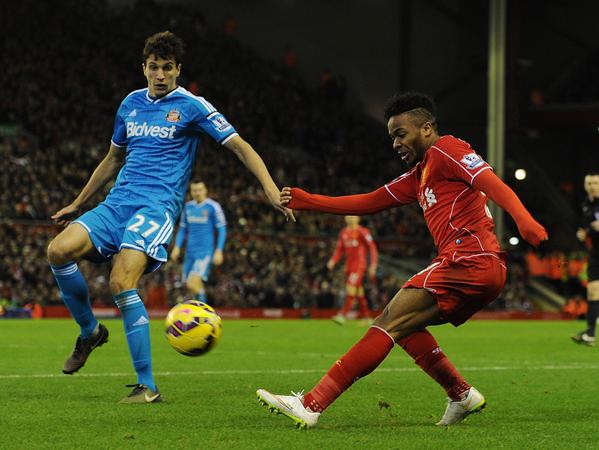 The only way Liverpool can get a positive result from Old Trafford is by being positive, which means, they must get enough bodies in the box, whenever a dangerous attack develops. How many times have we seen this season, Sterling single handedly trying to engineer a move, in the end finds only a single player crowded among several defenders in the box? Wasted opportunities in big games seldom win you matches.

Approach as a cup game ‘must win’ mentality

Rodgers is struggling. There no denying of it. Also, there’s no denying that under him, Liverpool have progressed a lot. It’s hard to buy this argument that he has been just another lucky guy who got away with an excellent season, mainly due to the genius of one man, Luis Suarez.

This is another must win game for Liverpool, where victory would not only keep them in the hunt for top four, but psychological boost gained will be immense.

Liverpool’s best performance this season probably have come in the last 15 mins at Anfield against Basel. One wonder, why that baptism of fire was missing throughout? Back to the walls, pressure hanging on shoulders like an albatross, it’s time to come out of the shell and start producing what they’re capable of.