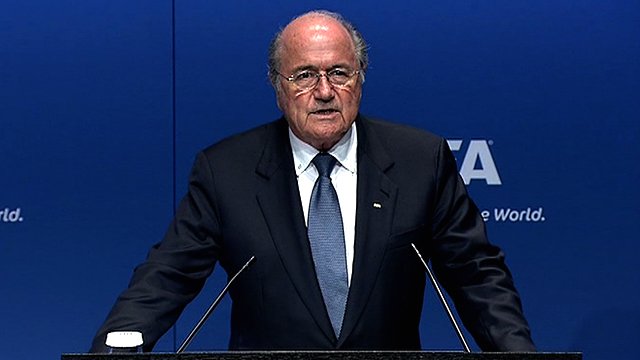 A resounding yes would be the answer to that particular question unless you are one of the Blatter camp. It was Kenny Rogers who best summed it up, in song.

It is a paradox that the fight to oppose Sepp Blatter has become almost as farcical as the events involving FIFA that have, over recent years, increased calls for him to step down. Almost on a daily basis potential rivals for the presidency have been emerging across a full spectrum of credibility from, almost certainly the only bona fide candidate Prince Ali, to ex players David Ginola and Luis Figo, two highly decorated footballers but with zero experience of high level football politicking.

Indeed at one stage there wouldn’t have been too much of a surprise if that nonentity of past years on the mainstream political front, the Monster Raving Looney Party had thrown in a candidate.

Thankfully the throwing of his chapeau into the ring by David Ginola proved to be what everyone guessed it was, a £250,000 publicity stunt by the bookmakers who stumped up the cash.

Prince Ali’s nomination received added gravitas when the Football Association backed his quest and then Van Praag, President of the Dutch Football Association, announced he had the necessary nominations to be accepted as a valid candidate. The federations of Belgium, Sweden, Scotland, Romania, the Faroe Islands and his own Netherlands FA. I saw a lovely headline the other day that rated Van Praag’s chances of toppling Blatter ‘as slim as Bradford beating Chelsea at Stamford Bridge’. That good I thought.

Dan Praag is an experienced and well respected football administrator and although Luis Figo, in the wake of Ginola’s withdrawal, said he was still in the race realistically it must be a straight fight between Prince Ali and Van Praag. Having said that the former Portuguese legend did encapsulate what most of the football world feels when he said of his standing for president.

“If you search for FIFA on the internet the first word you see come up is scandal. That has to change and the image of FIFA must be improved.”

Interestingly Figo hinted that during his canvassing for support he found many players, management and federations heads “all think something has to be done.”

But in the midst of all the candidates who declared themselves I think the most significant is the one man who did not. The man who would probably have pushed Sepp Blatter all the way, Michel Platini, the UEFA President, a long time critic of the man at the top at FIFA, has probably realised his best chance of the top job in world football will come in five years time, or earlier, Blatter is after all 78 and would surely not seek a sixth term. But then few thought he would seek a fifth.

Jerome Champagne, former French diplomat, threw his candidacy attempt into the mix but almost as quickly suggested he would be unable to get five letters of support in that quest. He suggested ‘fear’ was the reason as he felt any federation who came out in support would suffer retribution in the aftermath. Strongly alluding that no one is going to beat Blatter.

Anyone who follows football will know almost by heart the allegations and stigma that crop up whenever Blatter is mentioned. From the awarding of a lucrative FIFA hospitality contracts at the 2010 World Cup to a company run by his nephew Philippe, said to be worth £342 million, to signing off on a £19 million film about FIFA, in which he had the ‘starring role’.

Then there were the allegations of corruption behind the awarding of the next two World Cup finals tournaments, Russia in 2018 and Qatar in 2022 as if those two nations didn’t court enough controversy with the record on human rights.

Then most recently when Michael Garcia, charged by FIFA to produce a report on alleged corruption, not only cast doubts on the validity of his report, in part due to sections of the report that were removed, but resigned as a consequence. Perhaps that is the most damning of evidence of all that is stacked up against Blatter.

There is a consensus, gathering momentum, that having several candidates ranged against Blatter will not harm him, indeed it may even benefit his re-election but there is no doubt that this time around it has been the most difficult time for the Austrian as he seeks to tighten his grip on world football.

What is without question is that the moderates of the world game are paying heed to the adverse publicity ranged against FIFA on an almost daily basis. And, critically, the followers of the game, those who actually dig into their own pockets rather than freeload on the back of their national federations, want change.

The game needs leadership from someone with clear vision and perspective rather than someone at the helm who is blinkered by cronyism and nepotism, twin badges of a doddering and creaky dictatorship. A dictatorship which has become a focal point of ridicule from many in the football world, perhaps even more behind the back of the Austrian septuagenarian.

But will Herr Blatter succeed in the May election, probably. Will he refer back to Kenny Rogers and; hold, fold, walk or run? Doubtful.