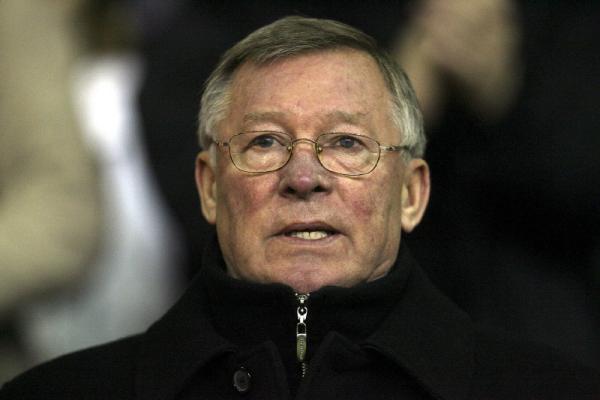 Welcome to Fergie Time, a new roundup/newsletter type deal that delivers news, opinion and links directly to your screen, plus fake conversations, knee-jerk reactions and awards that don’t really exist. As the name suggests, there will be some exaggeration, nsfw moments, canceled press conferences (oh, who are we kidding) and late, late, late scoring of points. You’ll like it, trust me.

Is the Carling Cup filled with poison? No? Then why is every big team in England doing everything possible to avoid touching it? Liverpool, Chelsea, Manchester City and Everton all fielded weakened teams and exited the competition after just one game. With the exception of Chelsea, every single one of those teams could do with lifting some silverware this year. The Carling Cup might not look all that shiny right now, but it will cure a bad case of empty-cabinet-itis as early as February.

Those teams may have sent out some second string players, but at least they sent their first choice managers. Manchester United boss Alex Ferguson took the night off to watch some Spanish football instead, leaving assistant Mike Phelan to pad his Curriculum Vitae with the words “100% record during my time as manager of Manchester United Football Club”, as United beat Scunthorpe 5-2.

Biggest loser is obviously Roy Hodgson, who’s been in the Liverpool job for less than 10 games, but already has his own cup nightmare to go along with Gerard Houllier’s vs. Grimsby and Rafa Benitez vs. Burnley. Except this was much worse, because Northampton came to Anfield all the way from League Two, and the game didn’t even produce another Djimi Traore does his Zidane moment.

Sam Allardyce says: “I’m not suited to Bolton or Blackburn, I would be more suited to Inter or Real Madrid. It wouldn’t be a problem to me to go and manage those clubs because I would win the double or the league every time. Give me Manchester United or Chelsea and I would do the same, it wouldn’t be a problem. It’s not where I’m suited to, it’s just where I’ve been for most of the time. It’s not a problem to take me into the higher reaches of the Champions League or Premier League and [it] would make my job a lot easier in winning it.”

Soccerlens says: First of all, NO. You wouldn’t Sam. There have been some pretty decent managers already in charge of Inter, Real Madrid, Manchester United and Chelsea who didn’t “win the double or the league every time”. Alex Ferguson for example. Second of all, I think those teams are looking for something a little more sophisticated than having El-Hadji Diouf run into opposition goalkeepers every week. Third, quotes like this are precisely the reason why you’ll never manage any of those teams. Fourth of all, let me repeat, NO.

Bravest Goalkeeper: Roma’s Brazilian keeper Julio Sergio, who ruined his ankle ligaments making a tackle outside of his box but stayed on the field because Roma had a) used all their substitutions and b) were already down to 10 men because Phillip Mexes had been sent off. Julio Sergio was in so much pain that he burst into tears while suffering through the last five minutes of play. But he didn’t leave until the final whistle went, and Roma staff helped him to the sideline.

Strangest Goalkeeper: Derby County’s Stephen Bywater (formerly of West Ham) has been causing curtains to twitch in sleepy Sutton-on-the-hill by displaying his rather odd homemade artwork in his garden, including “a blow up doll embellished with rubber genitalia”. Proving once again that in terms of sanity, goalkeepers are to football what drummers are to rock bands.

Flashiest Footballer in North America: Thierry Henry for his new NYC residence, a $15m Manhattan apartment with three floors, and an interior courtyard featuring a bamboo grove. Whatever that is. We’re still waiting for our invite to the housewarming Thierry…

Best Christianity Themed Romantic Duet by an Injured Brazilian Footballer & His Wife: Goes to Kaka and Mrs. Kaka for Presente de Deus (A Gift From The Lord), which was written and performed by the Real Madrid midfielder and his good lady wife. Let’s just say he’s better with a football than he is with a microphone.

Most Convincing Diego Maradona Impression by a Teenage Japanese Girl: Not a lot of competition in this category, so the convincing winner is Japan midfielder Kumi Yokoyama, who lit up the Women’s Under-17 World Cup with this El Diego-esque goal.

Q: Is Man Utd vs Liverpool or Arsenal vs Spurs the bigger game?
A: Depends where you live.

Q: Should Enzo Zidane play for France or Spain?
A: Neither, it’s Algeria’s turn.

Q: What do you do if you spot Harry Redknapp snoozing?
A: This, of course.

Everyone has a football fantasy. Mine is to win some more money on the Soccerlens Fantasy Football Game. There’s between $40 and $200 in prize money available each week, provided you pick some of these top 10 players like Didier Drogba and avoid red card magnet Lee Cattermole like the plague.