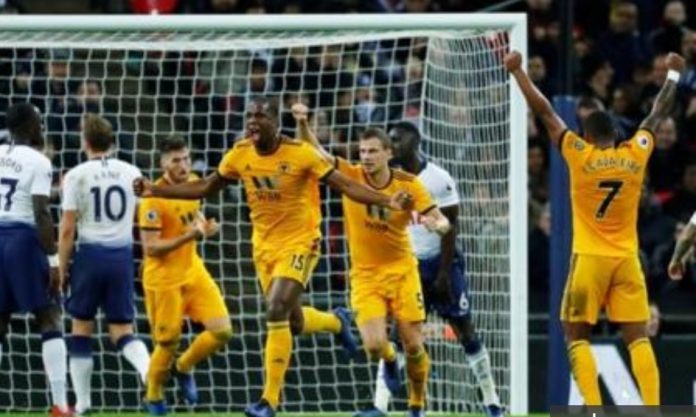 Wolves have a knack of performing against the top sides, today was no different. A fabulous 3-1 win at Wembley cut down Tottenham’s title charge in great fashion.

The victory was even more special because Spurs led, and looked on course to cut Liverpool’s lead at the top of the Premier League to three points.

Spurs took the lead through a Harry Kane thunderbolt. The North London club looked good for their lead, and went in ahead at the break.

The second half saw Wolves attempting at vain to get themselves back into the match. Finally the drama came with 18-minutes remaining. Willy Boly’s powerful header put Wolves level after Spurs had failed to add to their lead.

At that stage, Wolves Would have been happy to take a point back to Molineux. However, more was to come from the west midlands club.

Raul Jimenez saw his effort put Wolves in the lead. Hugo Lloris really should have done better, but the travelling fans didn’t care as a famous victory to add to the recent win against Chelsea edged closer.

The victory was guaranteed as Wolves added a third three minutes from time. Helder Costa firing home after the visitors hit Spurs on the break.

Wolves fans reacted in joyous mood by taking to Twitter to air their thoughts. 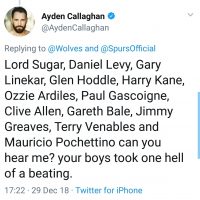 European spot is a possibility

Next up for Wolves is a home clash with Crystal Palace on Wednesday night. They will be hoping to start the year on a high as they close in on a European qualifying spot. Wolves currently sit 7th. Today was a fabulous way to complete a great year for the club.