Fans have reacted after Harry was officially named as England’s player of the year for 2018.

An announcement was made on the FA’s website www.thefa.com. The 25-year-old spoke of his pride in receiving the award for a second consecutive year. He said:

“To be voted England’s best player for the second successive year is something I’m immensely proud of. After such a monumental year, this award has particular significance as it’s always an honour to be recognised by the people that count the most – the fans”.

The award caps off what was a tremendous year for The Three Lions captain.

England’s advance to the Semi Finals at last year’s world cup in Russia was the nation’s best achievement since a third-placed finish in Italy in 1990.

The Tottenham man played a pivotal role, finishing as the World Cup golden boot winner after finding the net on six occasions.

England’s fine form has continued post-tournament, with success at the inaugural UEFA Nations Cup group stage. The Three Lions have advanced to the Semi Final stage, after topping a group ahead of Spain and Croatia.

Overall, Kane scored eight goals, in twelve appearances for England during the year.

Ankle ligament damage is keeping the Spurs striker out of action at the moment. However, he should have returned in time for England to begin their Euro 2020 qualifying campaign in late March. The Three Lions entertain Czech Republic on the 22nd, before travelling to Montenegro three days later. 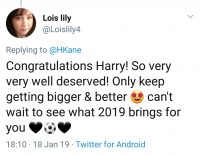 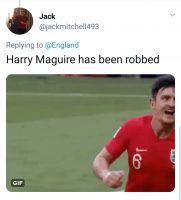