Debutants Cesc Fabregas and Diego Costa put in impressive displays as Chelsea overturned a half-time deficit to beat NK Olimpija Ljubljana 2-1 in their pre-season friendly in Slovenia. Fabregas set up Costa for the equaliser 10 minutes into the second half before defender Kurt Zouma scored the winner 8 minutes later.

The two Spaniards, signed for hefty sums on money in the transfer window, were handed starts by manager Jose Mourinho. They looked sharp in the first half, but it was early on in the second half when they made a real impact. Fabregas, who had threatened throughout with some brilliant passes from midfield, sent Costa through. The striker still had a lot of work to do, but he sped past two defenders with ease before blasting the ball past the goalkeeper. Kurt Zouma then scored the winner with his first goal for Chelsea, slamming in the rebound after Fernando Torres had seen his shot saved. 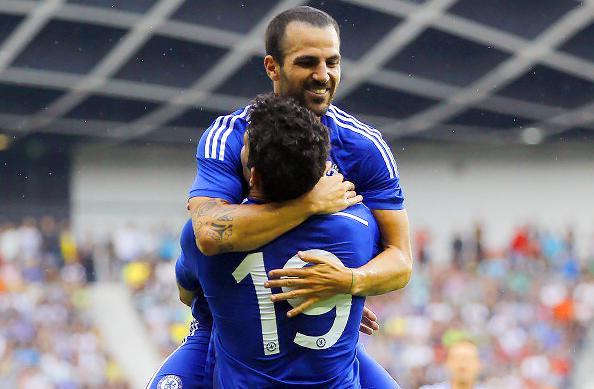 This was after Chelsea had fallen behind in the first half when Nik Kapun scored an absolute screamer past young goalkeeper Matej Delac. The Blues looked lively but struggled to find a way past the hosts’ stubborn backline. Mourinho wrung the changes at half-time, making 6 substitutions and adopting a different system, with Fernando Torres brought on to partner Costa up front.

Chelsea looked comfortably throughout the second period, dominating possession and hardly giving the home side a look-in. Branislav Ivanovic had a perfectly good goal cancelled out, when the referee adjudged it to have not crossed the line. Torres then missed a golden opportunity to score, somehow diverting the ball over the crossbar from Ake’s cross with the goal gaping. There were also chances for youngsters Patrick Bamford and Dominic Solanke, but neither of them could find the back of the net.

This was Chelsea’s fourth pre-season friendly. After beating Wycombe Wanderers and Wimbledon, the Blues were held to a 1-1 draw by Austrian outfit RZ Pellets. They now play 4 more friendly games (the next one against Vitesse Arnheim on Wednesday) before starting their Premier League campaign away at Burnley on August 18.

Chelsea fans will be encouraged by what they have seen so far. With the likes of Eden Hazard, Oscar, Willian and Andre Schurrle still to return after the World Cup, the Londoners look an extremely strong outfit. Expectations are sky-high as they look to improve on the 3rd placed finish they achieved in the league last time around.

One major problem that Chelsea have faced in the last couple of years is the absence of a consistent goal-scoring striker. If his debut is anything to go by, Diego Costa looks like the perfect solution.