On Thursday, 13 December, Fabio Capello, 61, was appointed by the FA as the next manager of England. Terms of his contract will be £4m a year after taxes for 4.5 years. He becomes the first Italian to lead the Three Lions, and this will be his initial managerial position at the prestigious National Team level.

“BBC sports editor Mihir Bose says Capello and the FA have an agreement that both parties can end the deal in 2010, but there is an option to extend it after the World Cup. One of the issues set to be ironed out is Capello’s choice of Franco Baldini as sporting director.”

Appeared 32 times and scored 8 goals for the Italian National Team.

Appeared at the 1974 FIFA World Cup in West Germany.

Began his professional playing career at the age of 18 with SPAL (SocietÃ  Polisportiva Ars et Labor located in Ferrara). Then played for AS Roma, Juventus FC, and AC Milan.

As a player, he won 4 Serie A Scudetti (Championships) with Juventus FC.

Was the first Italian player to score a goal at Wembley Stadium in 1973, which was the same game that Italy defeated England for the first time on English soil.

As a coach, he won five Serie A Scudetti: AC Milan (4) and AS Roma (1). Two at Juventus FC were later revoked.

As a coach, he won two La Liga Championships with Real Madrid.

As a coach, he won the 1993-1994 UEFA Champions League championship with AC Milan.

As a coach, he won the 1994 European Super Cup with AC Milan.

“To manage a national team you need to be a certain age with plenty of experience and with a presence and a CV that is indisputable and Capello has all of that.” Sir Alex Ferguson

“He has a clear idea of what he wants. I believe as well he’s a strong winner. The guy is convinced of the methods he uses.” Arsene Wenger

The decision was not met with complete enthusiasm by Steve Coppell, manager of Reading, or Tony Adams, the former captain of the Three Lions.

“I’m sad to be honest. I’m a proud English manager and I would have loved an Englishman to have been in charge… You look at the CV and, I must admit, it’s enticing. He’s everything you’d want an English manager to be.” Steve Coppell

“I wanted English. There’s a lot of good Englishmen and I just think it was only right we should have tried to get someone English.” Tony Adams

“There is a tremendous difference in the appearances between one game to another. How can footballers at the level of Beckham and Owen display such different games when they play for their own National team? It is clear that the English shirt is very heavy also for these great champions.”

“We coaches asked ourselves how was it possible that England didn’t qualify for Euro 2008. England, more or less like Spain, wins very little despite having excellent players. I saw a few games of England, in particular with Russia. The players defended in their own area for 90 minutes despite a 1 x 0 first half advantage. And instead with Croatia they lost 3 x 2 when a tie at home was sufficient to qualify.”

Some experts, such as Arsene Wenger, have cited Mr. Capello’s lack of English as a potential liability. But let us be reminded of one important piece of history in World Football. All of the early coaches of the sport were British, and took their knowledge around the world. In Italy, the coach is affectionately called, “Mister,” as a homage to the early English teachers of the game.

Clarence Seedorf, currently with AC Milan, played for Mr. Capello during his first stint at Real Madrid.“He speaks English but I do not know how fluent he is. He is a very intelligent man so I do not think he is going to have problems learning it fast. Even in Spain in the first month, his Spanish was not that good but he made it very clear what he wanted. His body language is well known, so he will know exactly how to deal with it.”

A Trail of Hasty Departures and a Few Rows

Despite his club side successes, he has been the focal point of controversies. He left AS Roma for Juventus FC in the summer of 2004. A few months before, he stated that “I’ll never coach at Juventus.” Immediately following the first publication of the “Calciopoli” betting scandal, he departed Juventus for greener pastures at the Estadio Bernabeu. He has also had significant rows with notable players. For example, David Beckham, Antonio Cassano, Alessandro Del Piero, Edgar Davids, and Francesco Totti. But one recent event stands out for me. After Real Madrid clinched the La Liga championship against Real Mallorca, several of the players threw him up in the air in celebration. He may be a tough man, a “ball breaker” by his own admission, but he is generally respected by his players for his vast football acumen.
. 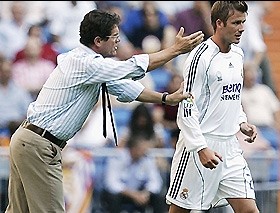 Despite stating that Beckham would never play again at Real Madrid after his transfer was announced to the LA Galaxy, Mr. Capello recognized his mistake, and called Beckham a true professional. Beckham led Madrid to further glory by winning La Liga.

“I convinced Capello the same way in that I have always been able regain the faith in persons who spoke badly of me, added the midfielder. I understood that I had to demonstrate all of my professionalism, and in the end Capello admitted that he was wrong in how he handled me. It pleased me that he had recognized his error, but he never came to me and said ‘I’m sorry David, I was wrong.’ In every way I don’t feel that I have to criticize him, because I have a great deal of respect for him.”

Message of Change by the FA

The FA made a serious commitment to change the course of the often rocky England ship. Although he has never managed at the national team level, Felipe Scolari and Marcello Lippi had no significant previous National Team management experience before leading Brazil and Italy to their respective World Cup Championships. (Scolari had a brief spell in 1990 as the National Team manager of Kuwait).

Mr. Capello is a proven winner, and with the potential assistance of the highly respected Gianfranco Zola to ease his transition, the next few years should be very interesting. Mr. Capello will provide a different tactical approach. His dedication to discipline and preparation are well documented. He is not afraid to bench star players, and does not base his decisions on public and/or media sentiments. Don Fabio will imbue his footballing philosophy on the English team, media, along with its supporters. How the players, media, and fans respond remains to be seen.
.

Coaching Record According to Soccerbase

Since 2001, Mr. Capello had the following statistics. (Wins, draws, losses).

For a short “Fabio Capello in pictures” biography, from his early days as a player for Spal, Roma, Juventus, and AC Milan, to his managerial career with AC Milan, Real Madrid, and Juventus, as well as his famous gesturing antics on the touchline, see Marco Pantanella’s post on mCalcio.com.
.

Coaches As He Played

He was a very efficient, tactical, and hard-nosed midfielder during his playing career. He came of age during the salad days of Italian catenaccio. When I was young, I had the opportunity to see him play once in person. For me, his teams reflect his own resolute and determined personality. He is a results-oriented manager. As Carlo Ancelotti said, “If you want entertainment, go to the cinema.” In my humble opinion, England have improved overnight by his selection. But as with all things, results will be the final barometer.

In bocca al lupo, Mister Capello. Which is the Italian way to say good luck. “In the mouth of the wolf.”