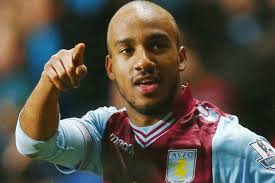 Liverpool have been suffered a massive blow in signing Fabian Delph after midfielder committed his future to Aston Villa after signing a new deal.

The 25-year-old had just six months left on his previous contract and was linked with a move to Liverpool as he was considered to replace the Reds star player Steven Gerrard at Anfield.

Paul Lambert’s side were considering letting the midfielder leave Villa Park rather than letting him leave for nothing in the summer. However, Delph has ended the speculations and signed a new four-and-a-half-year contract to extend his stay with his current employers.

” Fabian Delph took time out after signing his contract to film a video message for supporters. Delph was keen to address fans after putting pen to paper on his new four-and-a-half year deal in claret and blue,” a statement read on Villa’s official website.

“Delph was eager for loyal fans to be the first to know that he’s committed to Villa – and excited about his weeks, months and years ahead.”

After Delph signed an extension, Lambert admitted that he was shocked by the England international’s decision to sign a new deal as he was resigned to lose the midfielder.

“When you get someone like Fabian – who might have had the possibility of going elsewhere to pastures new – to have him commit is a massive, massive coup for us,” Lambert said.

“No-one expected it. I think everyone thought Fabian was going to go and we would have to get someone else in. I don’t think anyone saw this coming. But it’s been something we’ve been trying to do, as I have always said. It’s great for Aston Villa. It’s great for Fabian. I think this is a massive, massive step.”

Delph revealed that he was always going to stay at Villa and claimed that he feels loved at Villa.

“The club has given me a great platform to perform and a great opportunity to showcase what I can do,” Delph explained.

“The fans have been great with me, the chairman has been absolutely fantastic with me and I have a great relationship with the manager and I see the boys here as my brothers, my family and I am delighted to stay here.

“I feel like this is me – I love the club, I love being here and I want to put 100% into everything I do here. This is my club and I want to be here. That’s why I am committing my future. There was no way I was going to bail out. I am here for the long run,” Villa midfielder said.