The second Merseyside derby takes place on Saturday with Everton playing the hosts having drawn at Anfield back in September.

Liverpool head into this match on much the better form but were in action on Wednesday where they scored a late winner to beat Bolton Wanderers in their FA Cup fourth round replay.

12 points separate these two local sides before the weekend.

Tim Howard remains on the sideline since going off at half-time on Boxing Day.

Steven Pienaar has barely played since the opening day of the season because of injuries, Leon Osman has been out since the start of December and James McCarthy has been out for all of 2015 – none of these will feature on Saturday.

Brad Jones is still out but Simon Mignolet appears to have locked down his first-team place for the foreseeable future.

Kolo Touré will be with the Ivory Coast for the African Cup of Nations final on Sunday. Jon Flanagan has been out all season. Glen Johnson made his return last weekend.

Lazar Marković is a doubt with a back injury. Brendan Rodgers will make his decision on Daniel Sturridge after training today. 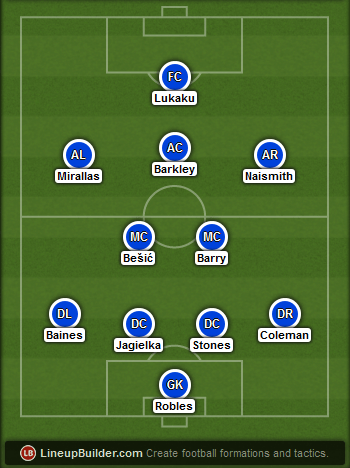 Brendan Rodgers has his back three available to stick with. This 3-4-3 formation has brought the best success to Liverpool this season. Should Lazar Marković not pass a late fitness test, Jordan Henderson can move out to the right with Steven Gerrard and Lucas playing in the middle. We think Daniel Sturridge will start from the bench again so Raheem Sterling can stay as the striker with Philippe Coutinho and Adam Lallana flanking him. 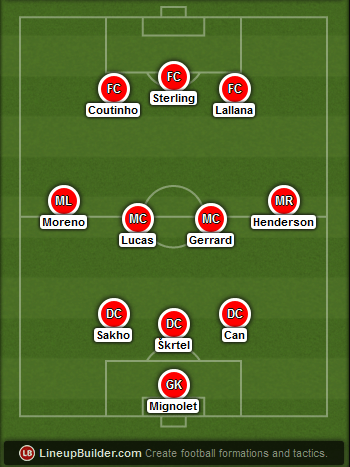 Roberto Martínez has been playing Joel Robles in goal during Tim Howard’s absence. Not too many teams have conceded more goals than Everton this season though with this being the manager’s preferred back four. Romelu Lukaku has not been in the best form since signing permanently but is the club’s top scorer with seven goals, playing the sole striker role. There hasn’t been a great deal of supply from behind him to be honest.

Philippe Coutinho vs Séamus Coleman
The Liverpool playmaker has been in fine form of late, capped with his late minute winner versus Bolton Wanderers in the FA Cup midweek. The Brazilian powered home an effort off the underside of the bar from 20 yards. Séamus Coleman has not matched his attacking form of last season and has not been solid in defence either. Will be in for a long day against Liverpools’ left-sided forward who enjoys picking up space and cutting inside. Gareth Barry isn’t the most mobile or intelligent defensive midfielders either.

Adam Lallana vs Leighton Baines
Leighton Baines has been more useful going forward than he has been once again this season. The Everton left-back has recorded an impressive eight assists from that position, including set pieces but will have his defensive duties cut out should Adam Lallana play on the right as we predict. The Liverpool man is lively, moving all over the pitch from which we expect to find himself space at the Everton defence’s expense.

Steven Naismith vs Mamadou Sakho
Steven Naismith is a useful player in this Everton team. Often finding space in the opposition defence. Not been in as good form as he started the season but could be a threat to Liverpool in this one. Mamadou Sakho has looked the weakest part of the Liverpool defence of late and Alberto Moreno in front of him isn’t the best at defender. Perhaps the Scot can be involve in a goal for the home side.

Prediction: Everton 1-2 Liverpool
Liverpool come into this match on the better form, have most of their first team available and could have Daniel Sturridge back. Everton don’t even have their first choice goalkeeper available, already have a weak defence and have won just one of their last nine in all competitions. They may make it a tight game but we expect Liverpool to pull through.