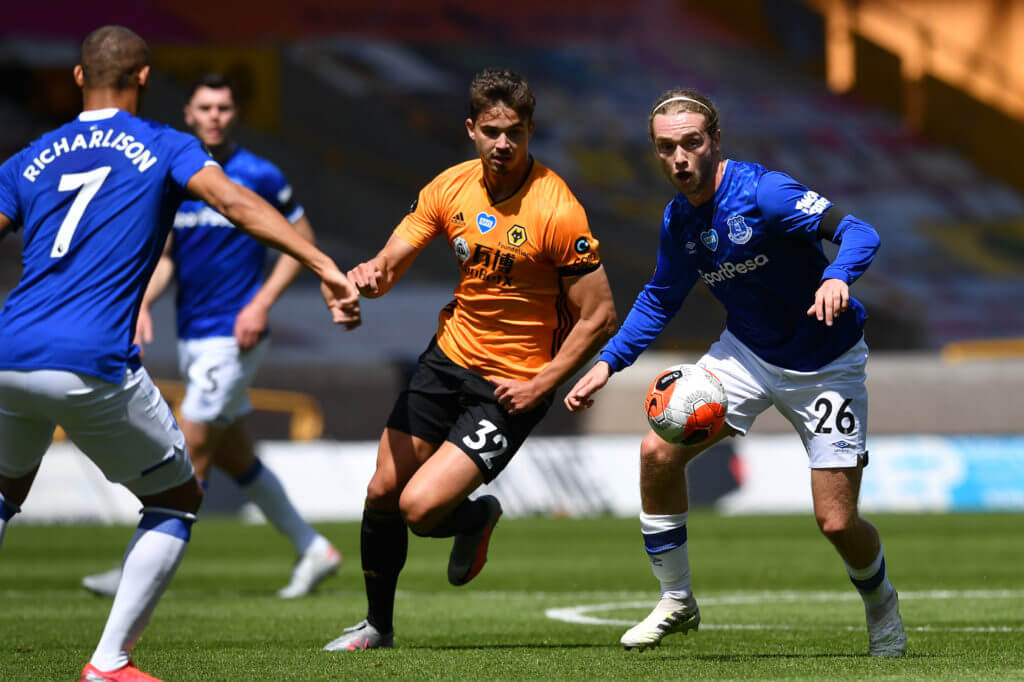 Everton are now winless in their last three games in the Premier League following their 3-0 defeat against Wolverhampton Wanderers on Sunday.

Wolves bounced back from consecutive defeats with a win to boost their chances of claiming a place in next season’s Champions League.

Raul Jimenez scored the first from the penalty spot in first-half injury time.

Leander Dendoncker headed in the second just a minute after the restart before Diogo Jota scored 15 minutes from time to put the game beyond doubt.

Everton boss Carlo Ancelotti said after the match that the spirit of the side was ‘unacceptable’.

The Toffees mustered just two shots on target during the game. It was their heaviest defeat since the restart of the Premier League, and it leaves them 11th in the table.

Many Everton fans took to Twitter to express their reaction to Tom Davies’ performance after the game.

The 22-year-old midfielder had a shocker of a game, and many Everton fans criticised him heavily for his contribution. Here are some of the selected tweets:

#TomDavies has been playing like a headless chicken: having played for 4 managers in his first 100 league games might warrant our benefit of the doubts, but we need to do something quickly. Otherwise, his fortune would drop faster than Cadamateri's. #EvertonFC

I couldn't understand why @Everton want Lingz, but after watching Tom Davies it makes sense. A player like that still gives me hope I can pay in the PL at 36 yrs of age. Abysmal player. Everton are a massive club and shouldn't have players like that.

Tom Davies is the worst Everton player ever https://t.co/Swx80gS8vN

How on Earth is Tom Davies a professional footballer, never mind a Premier League footballer.

He’s trying to make a silk purse from a sows ear. Tom Davies epitomises what’s wrong with this club. A local lad who’s only contribution was a goal against City 4 seasons ago. He’s not impressed, he’s not improved, he’s regressed. So the romantics amongst the fan base love him

Davies managed only 44 passes during the game with hardly any defensive contributions.

To be honest, Davies, who has made 27 appearances this season for the club, has been very average this season.

If Everton manage to sign a midfielder this summer, Ancelotti should allow the youngster to go out on loan.