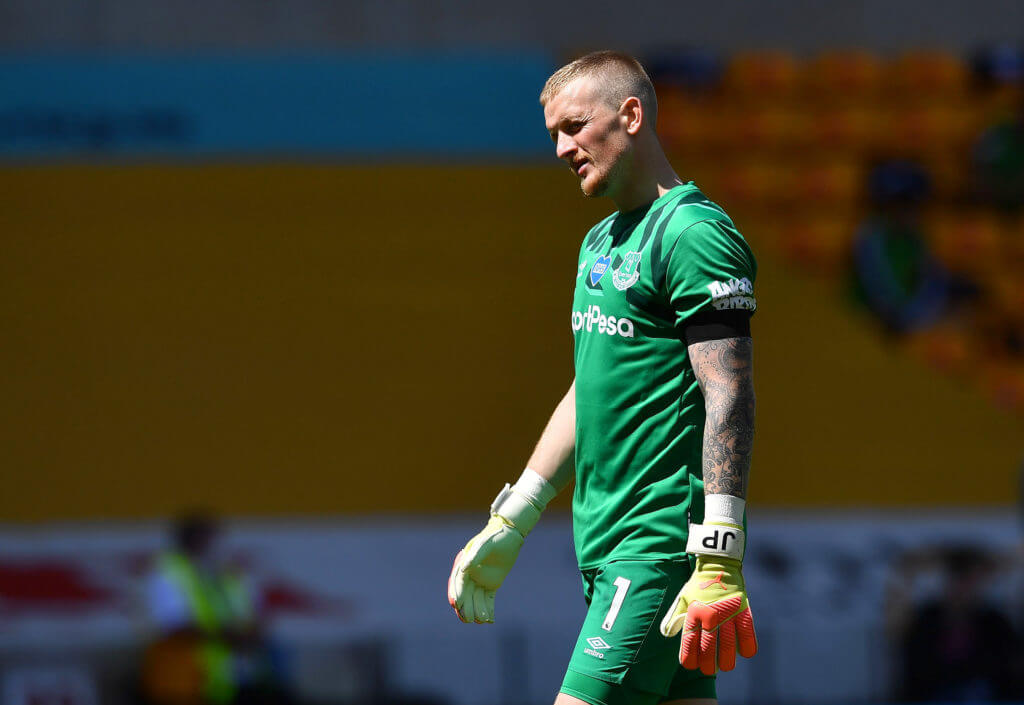 Everton suffered a 3-0 defeat against Wolverhampton Wanderers in the Premier League on Sunday.

Carlo Ancelotti has said after the game that the defeat was unacceptable. The Toffees were comfortably beaten with some of the players putting in below-par efforts.

It is Everton’s heaviest loss since the restart of the Premier League and it leaves them 11th in the table.

Jordan Pickford was one of the players who came under criticism from the fans.

The 26-year-old goalkeeper has been very inconsistent this season, and once again he put in an erratic performance at Molineux.

He has made far too many mistakes this season over the course of the season, and many Everton fans are finding it hard to defend him further.

In almost every game, there seems to be an error or moment of panic with him.

In the second half when Daniel Podence cut inside from the right flank and hit his effort straight at Pickford, the Everton goalkeeper failed to collect it neatly.

The ball managed to get out of Pickford’s grip and roll agonisingly towards the line before he scrambled to get a hand on it.

No goal was conceded, and his reaction to the incident was criticised by the Athletic journalist Greg O’Keeffe.

Many Everton fans feel that he should be replaced by Ancelotti this summer. Here are some of the selected tweets:

Can understand the anger to be honest. Those sorts of gestures paint the picture of someone who doesn't take those regular mistakes seriously

I think both things are equally bad & send the wrong message. He needs replacing, we won’t do anything with him in the team.

His teams getting pummeled and at that point he had already made a clanger dropping a cross which he got away with. The guy makes himself seem like an absolute joke with his carefree reactions.

Both indicate he’s not suitable to be anywhere near being England goalkeeper…he’s too small for a start!!

Don't really care about the smirking. I'd rather have a goalie who laughs off his errors than lets his head go down.
His concentration levels are awful though.

Pickford is erratic and error prone. Now we play out from the 6 yard box even his distribution asset is diminished.
Another very average Everton keeper

No, both are not acceptable. The mistakes highlight that he’s not good enough, and the reactions display an arrogance that highlights he’s not taking them seriously enough. He’ll never change, that’s been shown by history repeating itself over and over. Time to get rid

His attitude stinks. He is robbing the club and we should get rid of any player that is not professional enough to do his job and concentrate for the entire match. Without doubt needs dropped!