With a week to go before Euro 2008 starts, the 16 participants are busy with their final tune-ups before next weekend. Some teams look to be on firmer ground than others as they go through their final warm-up matches and training sessions before the real action begins.

Who’s looking good heading into next weekend, and who has a few things to worry about? Here’s a group-by-group rundown of the latest news.

Tournament co-host Switzerland will go into their opener against the Czech Republic with confidence after taking care of business in their warm-up matches. On Friday, the Swiss easily disposed of Liechtenstein at St. Gallen’s AFG Arena by a 3-0 scoreline, with star forward Alexander Frei’s double making him the national team’s all-time leading scorer with 34 goals in 59 appearances.

As for their upcoming opponents, they also had an easy time of it in a 3-1 win over Scotland in Prague. It took an hour for the breakthrough to happen, but when it did, the floodgates opened, with Libor Sionko scoring twice.

In other news for the Czechs, with Arsenal’s Tomas Rosicky set to miss out on Euro 2008, soon-to-be Atletico Madrid defender Tomas Ujfalusi is taking the captain’s armband. It’ll be a blow for the team to be without Rosicky (67 caps/18 goals), especially in a pretty competitive group.

Most of the talk surrounding Portugal at this point involves Manchester United’s Cristiano Ronaldo, who has a competition to play in the midst of all of the speculation surrounding him and Real Madrid. He and his Portugal teammates wrapped up their competitive preparations with a 2-0 win over Georgia on Saturday, with Joao Moutinho and Simao Sabrosa scoring in the first half.

Turkey have already played their final Euro 2008 warm-up, as they disposed of Finland 2-0 on Thursday night in Duisburg, Germany, with Middlesbrough’s Tuncay Sanli scoring the opener, and former Sheffield United man Kazim Kazim (Colin Kazim-Richards) assisting on the finisher late on.

Austria ended their Euro 2008 preparations in style, as the co-hosts routed Malta 5-1 on Friday night. Ronald Linz scored twice to lead the rout. Austria coach Josef Hickersberger said that they needed the win to gain self-confidence, and they’ll need it, going up against a talented Croatia side next Sunday.

Croatia will be without star striker Eduardo for their Euro 2008 run, but they should be buoyed by the fact that the Arsenal striker, who suffered that unforgettable injury against Birmingham in February, could very well return to action before next season starts.

Croatia drew 1-1 with Hungary in their final Euro 2008 warm-up on Saturday, and while coach Slaven Bilic should feel good that it looks like Niko Kovac (scored the opener for Croatia, netted an own goal late in the first half) has his scoring touch heading into the competition, he has to hope that all of his goals in Austria/Switzerland are in the right goal.

Poland, who are making their first appearance in the Euro finals, have made their final squad cuts, and their 23-man squad will have a little Brazilian flair, as Legia Warsaw midfielder Roger Guerreiro, who was only granted Polish citizenship in April, got clearance from FIFA and will represent his adopted country in June. Speaking of squads, we’ve got links to all 16 Euro 2008 squads here.

Germany is one of the tournament’s favorites, but if they fall short, will it be because of the ball? Jens Lehmann conceded twice in the last half hour to allow Belarus to get a 2-2 on Tuesday, and said it was because he’s having trouble adjusting to the Euro 2008 ball. Something to worry about for the Germans? We’ll see…

They did have a tough time in disposing of Serbia in their warm-up on Saturday, but goals from Oliver Neuville and Michael Ballack in the final 20 minutes gave the Germans a 2-1 win, which is all that matters in the end, right? 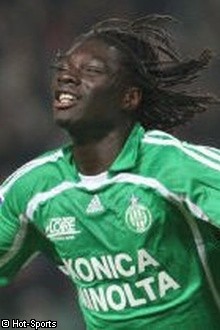 Group C is the Group of Death, chock full of teams who could lift the trophy at the end of June. How do we see Group C shaking out? Here’s the preview done by betting expert Craig Smithson.

Italy and Holland are set to start their group campaigns against one another, and while the Italians did a good job of converting their chances in a 3-1 win over Belgium on Friday, Marco Van Basten isn’t pleased about how wasteful his side was in a 1-1 draw against Denmark on Thursday.

Raymond Domenech’s decision to leave the experienced David Trezeguet off of the squad in favor of newcomer Bafetimbi Gomis looks to have paid off at first impression, as Gomis made his debut in the second half of Wednesday’s warm-up against Ecuador and netted a brace to give France a 2-0 win.

As a result, the St. Etienne man was rewarded with a place in the final 23-man squad, with Djibril Cisse being left out. Somebody could be making a lot of money in the next few weeks…

Gomis’ stellar debut might be a little worrying for France’s opening opponents Romania, as center back Dorin Goian is doubtful for the June 9 match after straining a tendon in his left leg during Friday training. But, even without Goian, Romania easily disposed of Montenegro on Saturday to the tune of a 4-0 thrashing.

Russia’s hopes to make a run in Euro 2008 could have taken a big hit on Wednesday night, as star striker Pavel Pogrebnyak (10 goals in the UEFA Cup for winners Zenit) suffered a knee injury in a 2-1 win over Serbia. Coach Guus Hiddink said that there are issues with both his knee and meniscus, but they’ll have to wait and see if he gets better before deciding to replace him.

Luis Aragones decided to leave Raul out of his final 23-man squad for Euro 2008, but will it come back to haunt them? David Villa netted one of the goals in their 2-1 win over Peru on Saturday, and Raul’s ‘replacement’ in the squad, Zaragoza’s pacy Sergio Garcia, replaced him in the 82nd minute to get his first cap. Will Mr. Garcia get to burn some of Europe’s finest with his quicknes and justify his place in the squad? Aragones best hope so.

Make sure to check this space everyday this month, as we’ll have daily roundups on all the latest from Euro 2008 from start to finish.