In June, 16 of Europe’s best national sides will descend upon Austria and Switzerland for the 2008 UEFA European Football Championship, or as most people call it, Euro 2008. While many of the continent’s top teams will be on display, some of Europe’s – and the world’s – best will be as well, so even if your team isn’t in it, you still have plenty reason to watch.

With that in mind and before the tournament begins, we (as in I) have conjured up the juggernaut of juggernauts, an All-Star Euro 2008 Starting XI.

There are several players you won’t see on this list, like Francesco Totti, Fernando Torres, and others, but I compiled this list with one major rule – no more than two players from one country, for the sake of diversity. Keeping that rule in mind, I did try to include the best players, both promising youngsters and experienced stalwarts alike. So, while all of the names below are recognizable, you may not agree with all of the selections. Then again, you’re not supposed to.
.

You’ve got to give Buffon a lot of credit for remaining loyal to Juventus even after they were relegated, because a lot of other players in his position wouldn’t have. All the while, he’s continued to remain in the best of the best at his position. It almost seems like he’s been around forever, but he only turned 30 in January.

Lahm put in a stellar performance in front of the home fans at the World Cup in 2006, and was chosen as the left back for UEFA’s Team of the Year that year. At 24, he’s still relatively young, but he’s rated at one of the best in his position, and that’s why he’s also in high demand as well, by the likes of Manchester United and Barcelona.

Cannavaro may be pushing 35, but there aren’t many in the game who patrol the backline as well as he still does. Cannavaro was the first defender to win the FIFA World Player of the Year award when he won the 2006 award (Paolo Maldini and Roberto Carlos finished second in 1995 and 1997 respectively), and also won the Ballon d’Or that year as well. Now at Real Madrid, he’s still going strong, and for his country, is well over the century mark in caps.

Carvalho is one of the cogs in the Chelsea defense, and one of the best defenders in Europe for the last several years. Besides doing a world-class job of keeping things tidy at the back for both club and country, Carvalho can chip in with a goal every now and then too.

There’ve been a lot of players bought for exorbitant prices in the Roman Abramovich era, but Carvalho’s paid back the 20 million pound investment in full and then some.

At only 21 (he’ll be 22 at the end of the month), Ramos is rated as one of the top rising prospects in European football, and has established himself as Spain’s first-choice right back.

The versatile Real Madrid man can also be a key part of attack, as he’s created several goals for Real this term, and scored a few as well.

A career-best season last term for Sneijder caught the eye of Real Madrid, who lured him from Ajax for 27 million euros. He got off to a cracking start in Madrid, scoring four goals in his first three matches, but has cooled since, with only two goals.

But, anytime he’s got the ball at his feet within scoring distance, you’ve got to be on your toes if you’re the keeper, because he can score from anywhere, right foot or left, standing up or falling down.

Cesc has been in fine form this season, playing an integral part in Arsenal’s push to take back the Premier League title, scoring a dozen goals and setting many more up from midfield, continuing his rise as one of the top playmakers in the world.

He still has yet to break his international duck for Spain’s senior team, but the fact that he’s really found his scoring touch for his club this season bodes well for his country.

Modric is one of Croatia’s brightest talents, and is on the want-list of several top European clubs, including Chelsea and Arsenal, where he could reunite with former Dinamo Zagreb teammate Eduardo. The 22-year old already has two dozen senior team caps to his name, and has many, many more to come.

It’s only a matter of time before he’s on his way to a big club, but a breakout performance at Euro 2008 could send his value through the roof.

He can play anywhere in attack, but I’ll stick him in at right winger here.

Besides his scoring exploits from the current season, Ronaldo was one of the top scorers in Euro 2008 qualifying, scoring eight goals in helping Portugal reach the final stage of the tournament.

Whether or not Jean-Michael Aulas likes it or not, Lyon continues to develop players who catch the eye of Europe’s top clubs.

Lyon’s latest gold-mine is the goal-getting 20-year old, who has really announced his presence to the rest of the continent with a tremendous campaign. He also looks to figure prominently in France’s plans in the summer. As to whose shirt he will be wearing come the start of next season, no one knows.

I could have put either Fernando Torres or Luca Toni here, but because there were two Italians and two Spaniards in the team already, Klose gets the nod.

He’s not a name that immediately jumps off the tongue when you think of the world’s top strikers, but everywhere he goes, he’s a good bet to find the net. In his first season at Bayern Munich, he’s combined with Luca Toni to make one of the best strike partnerships in Europe – and to keep Lukas Podolski on the bench, for the most part.

Klose was the Golden Boot winner at the last World Cup with five goals, after netting five times for the runners-up in World Cup 2002, which accounts for 10 of his 37 international goals.
. 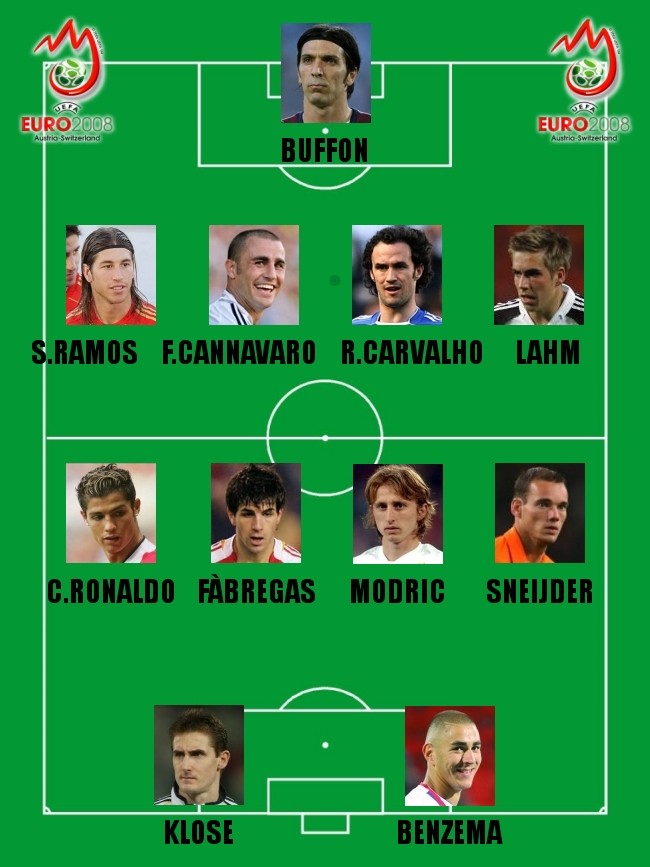 So, who got left off? Like I said, guys like Totti, Torres, Luca Toni, Eric Abidal, and others to name a few of the more popular names, or even Rafael Van der Vaart, who’s been in terrific form for Hamburg SV this season.

There are also a few underrated names, like Russia’s Andrei Arshavin or Croatia’s Mladen Petric (the guy who put the dagger into England’s Euro 2008 qualifying hopes), who are big players for their respective sides, and I would have likely found a place for Arshavin, if he wasn’t going to be suspended for the first two group matches.

What do you think about the selections? Who would you add/drop?
.