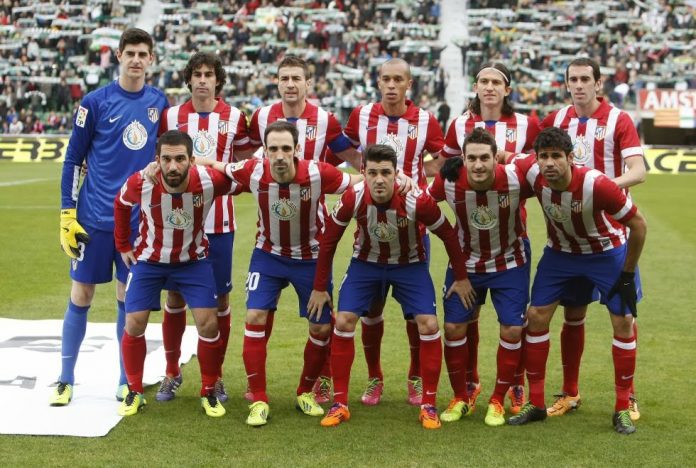 Diego Simeone is the best thing to happen to football management since Pep Guardiola. What El Cholo has done at Atletico Madrid over the short span of two years is truly beyond anybody’s wildest imagination.

To suggest that a team which is saddled with a debt of over 500 million euro and an annual budget at least five times less than heavyweights Barcelona or Real Madrid would pose any sort of challenge, let alone actually win the La Liga would have been madness before Simeone came along!

Simeone has converted Los Rojiblancos into a side that commands respect, that is feared all over Europe. The man has taken a bunch of average to good players and turned them into world beaters. Now a team of confident defenders towering head and shoulders above opponents, tireless midfielders who never stop hassling and harrying, and forwards who have pace, skill and desire; Atletico’s rise from the mid-tables of Spain to runner-ups in the Champions League has truly been a fairy tale story.

p.s. Do take time to zoom in and read the small bits of texts inside the pictures and diagrams. They explain the tactical roles and aspects far better than I can!

The formation is a basic 4-4-2 with two flat backs of four. Of course the shape does change drastically from the tactical diagram shown here during the course of the game.

Michael Cox of ZonalMarking.net has this to say about Atletico- “They stay very compact, with centre-forwards David Villa and Diego Costa dropping deep to prevent the ball being played through the centre of the pitch. More importantly, they remain extremely narrow, with the wide midfielders Koke and Arda Turan tucking inside into the centre of the pitch. Atletico work extremely hard without the ball, shuffling from flank to flank to close down possession, repeatedly doubling up against wide players. They generally regain the ball in their own half, although often the positions of tackles are in wide positions rather than in the centre – the opposition are put off playing the ball through the congested middle, and try more ambitious passes down the flanks.” I think that just about sums it up perfectly. 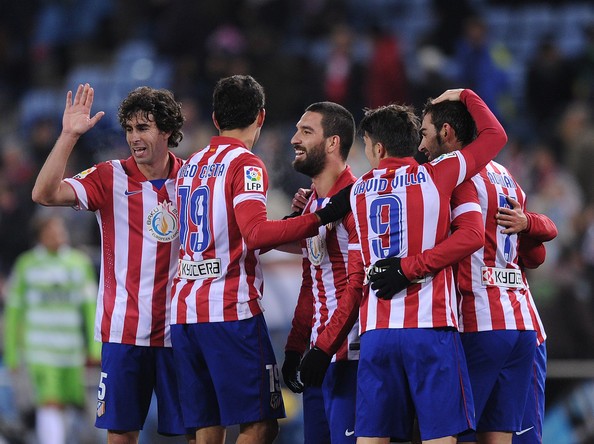 Let’s take a look at the individuals who make up this extremely united football team.

There’s not much to say. Thibout Courtois is well on his way to becoming the best goalkeeper in the world. The 6’5″ Belgian giant is so good, its scary!

Good in the air and on the ground, Miranda is, simply put, a solid player. He also complements Diego Godin perfectly by making up for the Uruguayan’s lack of pace. Brazil better have an amazing defense if they can afford to not select this man.

Diego Godin has probably had the best season of his life. He is the heart and soul of the best defense in Europe this season. Heading, marking and leadership are his key strengths.

He is the reason why Atletico can actually play narrow and invite so many crosses- Godin is a heading machine.

His towering header against Barcelona to win the league says everything there is to say about his contributions this remarkable season.

Both the full backs are the typically average players Simeone took under his belt and converted into fantastic competitors. The hard tackling defenders have been consistent, fit and reliable. Nothing more one can ask for in full backs.

Tactically, they tend to sit deep and narrower, more like extra center backs. Altetico concede space out in the flanks in exchange of a solid center. Juanfran tends to be more attacking than Felipe at times, as shown by his match winning performance against Chelsea.

The strikers drop into the midfield zone, which means the central midfielders, Tiago and Gabriel Fernandez aka Gabi, don’t have to push up to close down midfielders, and can focus upon keeping it tight in the central zone, denying opposition playmakers space to work in. They limit spaces in midfield and play tidy passes in possession. And they do the job extremely well, too!

Both are technically gifted and good at squeezing the ball out of tight situations. Gabi in particular is an amazing leader, enforcing Simeone’s words on the pitch. He is always fighting for the ball, winning it at the unlikeliest of times, and doing a rather boring midfield job without any complaints.

Koke and Turan are the workhorses of the team. Their jobs are basically this- keep the midfield tight and narrow, hassle and harry till you win the ball back, make daring, direct runs into the box and support the forwards. They aren’t the most explosive players in terms of pace or skills, but they are the engines of the team.

To understand how crucial the two wide men are to El Cholo’s strategy, here’s what Michael Cox has to say, “There’s no such thing as an Atletico clearance – it’s the start of an attack. As soon as they win possession, often by surrounding the man in possession with two or three players, they break forward quickly, directly and in great numbers too. Particularly adept in this respect are the wide midfielders Koke and Arda Turan, who are naturally creative but also very energetic and adept at winning possession in the first place – they make brilliant, quick decisions to transfer the ball into attack immediately.”

Koke has been a real revelation under Simeone. He plays like a man possessed and is widely regarded as one of the brightest talents in world football.

David Villa has had a decent season. He has blended in perfectly into the Simeone style of play. Offensively, El Guaje has the job of connecting the transition from midfield to attack, and moving into channels to draw defenders out.

Without the ball, he works hard, tracking back and hassling opponent midfielders in possession, making Atletico extremely compact. Another player who has one of the most un-flashy roles and does it with a fantastic attitude.

And finally, if there was a star player for Los Colochos, it would be-

The Brazilian turned Spanish goal machine has taken Europe by storm in what has been a remarkable season. Costa has to be the scariest forward to defend against- the 6’2″ powerhouse is big and strong, good in the air, fast on and off the ball, challenges for every ball, and does not let the defenders have a moments peace by pressing them to the ground!

To gain a perfect understanding of El Cholo’s Beast, just read the text in the picture.

His offensive qualities are much hyped, but he really embodies the term, ‘defending from the front’. He gets goalside of the opponent’s midfielder, works his socks off, and when Atletico win the ball, he runs at defenders like an unstoppable train, leading a lightning fast counter attack.

He may not be the most technically gifted or elegant footballer, but he is deadly and precise.

Apart from the starting 11, Simeone has some other tricks up his sleeves as well-

1. Raul Garcia- The brutish Spaniard is often deployed as a wide target man, being the target of long balls and set plays.

2. Set Pieces- Well rehearsed training ground maneuvers, some completely new, some timeless classics, like Argentina’s 1998 World Cup goal against England(Simeone was on the pitch, then) What makes them so effective is the attention to detail and the surprise factor.

3. Substitutions- Players like Jose Sosa, Cristian Rodriguez or Adrian Lopez almost never start, but always come on in the second half for a tired midfielder or forward. All these players are asked to do is keep the pressing going and take any chances that may come their way. And they do it without complaining.

So that was it, a complete breakdown of Diego Simeone’s Atletico Madrid, season 2013-14. You can download the tactic and test it out yourself here! Thanks for reading!