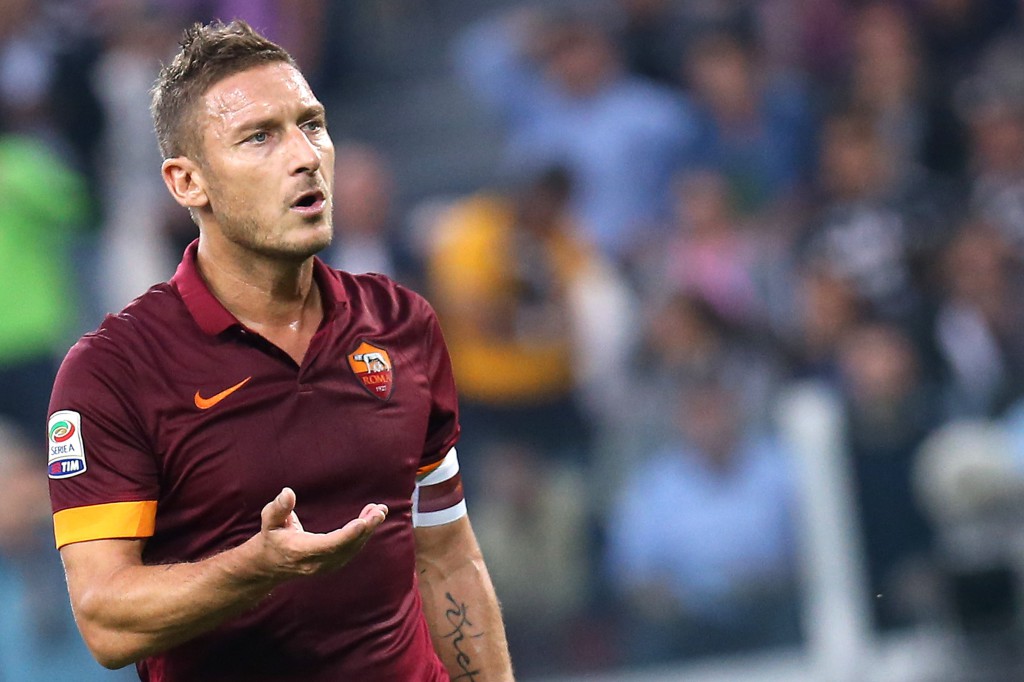 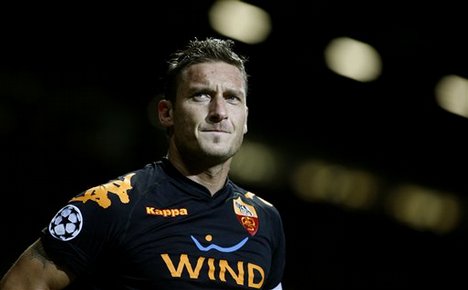 There sat Francesco Totti and Daniele De Rossi on the Roma bench, a pair of anguished sons of the Eternal City. No further part would the duo play as their beloved Lupi laboured away fruitlessly against Juventus, down both a man and a goal.

The symbol of northern power in Serie A looked set to plunder the Stadio Olimpico for a victory, a 12-point gap at the top of the table less than 20 minutes from opening up. Almost in synchronised fashion, Totti and De Rossi raised their fluorescent orange isotonic drinks to their lips, replacing the salt and sugar lost from their tired bodies – but not the sliver of pride that had been chipped away on a day of disappointment.

The two men have spent their careers to date living and dying by the Giallorossi banner, one they’ve seen in tatters on enough occasions to coax tears from the eyes from even the most hardened warrior. Heartbreak is a common emotion experienced in the sprawling stands of Roma’s cavernous ground, likewise by those donning the club’s symbolic colours.

And plunked on that bench, the two natives of the Italian capital looked crestfallen as ever. Neither Totti’s stoic gaze nor De Rossi’s prolific bristles could hide their pain, the Scudetto dream that had been so vivid months ago being shattered in front of them. And worse even, there was nothing they could do about it.

Yet their substitutions, adding to the suffering, were more than merited. Both were well off the pace against Juventus in a crucial encounter. Totti was ineffectual at the centre of Roma’s attacking trio as a false nine, the Giallorossi failing to create a single chance until he was hauled off. De Rossi found himself overrun in midfield as the Old Lady sat back and waited for the opportunity to counter, knowing full well the pressure was entirely on Roma to win.

The former 38 years into his life and the latter more than 12 months on the wrong side of 30, there simply wasn’t enough vigour in their bones. It’s been a sight all too common for the Giallorossi this term as their title challenge has fallen on hard times. Both were brilliant in Rudi Garcia’s first term at the helm – now, their places in the side are questioned.

With both looking on, the Giallorossi went on to seize the initiative despite a numerical disadvantage. Some 15 minutes from full time and with two hometown legends removed from proceedings, there were finally signs of life.

Substitute trio Alessandro Florenzi, Radja Nainggolan and Juan Iturbe provided the energy that was desperately needed. Florenzi, himself born and raised a Romanista in the mould of Totti and De Rossi, provided the assist for Seydou Keita’s equaliser – the free-kick from which it came was won by none other than Iturbe.

Roma clawed back a draw from the jaws of defeat, something of a consolation. A win was needed if the Giallorossi were to have any hopes of taking the battle for the Scudetto down to the wire. In truth, the fight was likely over whether Roma prevailed over Juventus or not. The months-long slump endured by Garcia’s men had already showed they weren’t equipped to break the Bianconeri’s enduring stranglehold on Italian football.

It was just over three years ago that this stranglehold was firmly laid by Juventus. The club’s first title in the post-Calciopoli era was claimed on the penultimate match day of the 2011-12 season as Calgiari were slain 2-0 on the road and AC Milan fell to Inter in the Derby della Madonnina. A swan song was to come. Not for Juventus – a new era was just getting underway – but for a legend set to part ways with his beloved, and not at his request.

One week after clinching the Scudetto, Alessandro Del Piero hit the back of the net one last time for the Bianconeri in Turin against the backdrop of what could only be described as a party atmosphere tinged with a bittersweet taste. Tears flowed from all corner of the Juventus Stadium after Del Piero was substituted in the 57 minute. There were muted protestations as he took an emotional lap of hounour around the stadium. The club hierarchy had chosen to wave goodbye to a loyal flag bearer – no shortage of fans felt a sense of injustice. 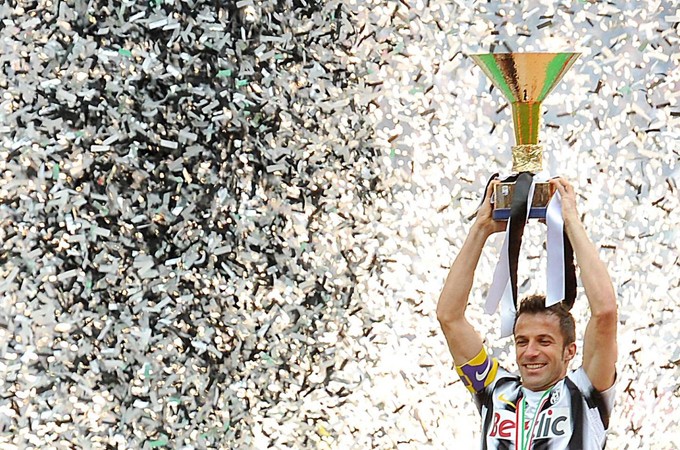 And yet, it was a high point. Confetti rained down on a smiling Del Piero as he raised the trophy high after Atalanta were dispatched 3-1, in part due to the Italian. A better send off has hardly been seen elsewhere in football.

“I’d be lying if I said I didn’t expect a contract renewal with Juventus,” Del Piero later confessed. “There had already been difficulties last year which had then been overcome.

“But I gave my all, and more than what I had, so I am extremely happy. After that, everyone has to follow their own destiny and mine is taking me somewhere else. There is no bitterness, at least as far as I am concerned.”

With that poignant memory in mind, the fans shuffled out of the Juventus Stadium with the wind at their backs, the players in identical spirit. Such a wind wouldn’t subside – it’s the same one the Old Lady continues to soar on. The direction had to be forward, even if the decision to part ways with Del Piero was all too difficult to make. Perhaps he had something left to give, even with only four starts coming his way that fateful season. But in the end, the choice was vindicated – and it continues to be to this day.

With respect to Totti, Roma aren’t in the same situation as Juventus found themselves with Del Piero. Important as the latter was to Juventus’ history, it’s arguable that the ties between club and player weren’t as strong as in the former’s case. There’s a distinctly different culture to Roma and Juventus, Rome and Turin, Romanisti and Juventini.

The form of Totti stands at the fore of the Giallorossi backstory in a near-unparalleled manner. Il Bimbo d’Oro: the boy who grew up with the third century Aurelian Walls as his protector, whose mother sent AC Milan packing so a teenage Totti could join Roma, the man who resisted the allure of leaving the capital cauldron for a place where he could have swollen his trophy cabinet. Incredible as the love affair between Del Piero and Juventus was, there’s a different feel of that between Totti and Roma.

And so, the idea of when the famous merger between man and club ends becomes an even thornier question than thought possible. It is an uncomfortable truth that Roma must one day do as their title rivals did with Del Piero. Nothing can last forever, and with Totti now 38 and his ability to influence a game at the highest level on show on Monday, questions must be asked.

From a tactical perspective, it’s become clear this season that the Roman is being pressed into a set-up that he doesn’t enable to function at its best. Used as a false nine, he drops deep to avoid the clutches of central defenders and acts as a playmaker rather than leading the line. This is, of course, by design – and worked wonders for the Giallorossi last season.

But as Serie A sides have found out the capital club and exposed the shortcomings in Garcia’s tactical acumen – namely, a lack of variation – Totti’s ability to influence has eroded. The elder statesman’s heroic brace against Lazio in January’s Derby della Capitale only served to obscure the greater picture. Roma have steadily become more and more blunt going forward, lacking modernity at the heart of their attacking trident. It seems Garcia doesn’t want to be the coach who heralds the end of Totti’s distinguished time as the centrepiece around which Roma are constructed – and who would want to be? 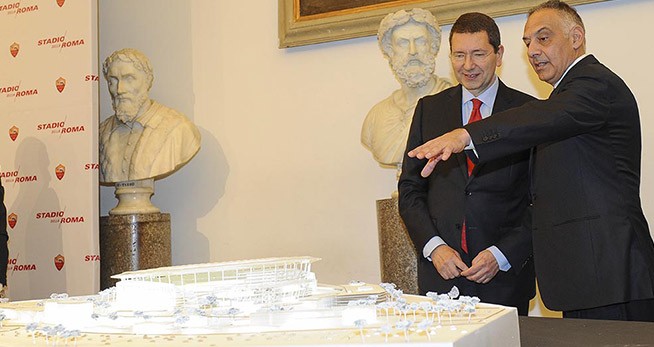 On the business side of things, Totti is the bedrock on which president James Pallotta’s new Roma is built. He’s the side’s most marketable star, recognised far and wide for his commitment to the club and touted timelessness. Years were required for the new ownership to get the fans onside, from discontent over changes to the club’s historic crest to attaining palatable results consistent with the vision of future greatness that has been propagated.

When the tide began to turn in Roma’s favour as the side exploded for a record points tally in the 2013-14 campaign, progress was there for all to see. Those in charge were at last entitled to credit, having finally put the pieces together, with Totti still a key cog. Pallotta and company needed Totti, and as such the 38-year-old’s political power remains as strong as ever – even as the side have fallen flat with him at the fore.

The issue at the heart of it all is how to move on – carefully, at that. Roma exist in a fragile environment, from the nature of the fan base to the hometown press which covers the club. Juventus had a moment in the sun in which to make their split with Del Piero, and their rivals to the south don’t have that luxury.

Instead, the prevailing feeling at the moment is overwhelmingly negative, not that the Giallorossi have any imminent plans of axing Totti. His contract runs until 2016 and Pallotta has repeatedly stated he expects to see the club icon kick the first ball at the proposed Stadio della Roma, slated to get under construction later this year. Totti’s long face accompanied by that of De Rossi on the Roma bench on Monday said it all, however. The Giallorossi were stronger, faster and more dynamic as he was relegated to the back seat. If Roma are to reverse their current rot and become the superpower Pallotta says they’re meant to be over the next five years, the winds of change must blow from all directions.

This isn’t to say that Totti should be pushed out of the club. For one, such a committed player who looms large in the Giallorossi story deserves to be honoured, treated with dignity and respect. Furthermore, he does still have something to offer on the pitch and in the dressing room. Kept fresh with a reduced role, he’d be able to function at a higher level when called upon, while his experience and leadership is invaluable for his team-mates to feed off of.

For that day Pallotta has envisaged when Totti walks out under the lights of the Stadio della Roma to come with the club in as rude health as possible, a new approach has to be taken. Reaching the next level requires the even the most hellish and unthinkable paths to be navigated, especially when it becomes evident they must be taken.

Roma saw on Monday exactly where doing so brought Juventus, to their own doorstep, taking the next step towards yet another accolade at the Giallorossi’s expense. The solution must be unique, not a rehashed version of Del Piero’s departure, but one that takes into account the essence of Roma and what it means to look to the future with the past reverently in mind. The King of Rome will always be the King of Rome, but the day is coming when the throne must become gloriously ceremonial.

Legends are permanent – even as their powers in battle wane, their continued presence not always best for the collective. Turning the page and writing a new chapter with a different narrative is the toughest task, and quite often, it’s those with the courage to pen it who can begin building a farther-reaching legacy on top of the beauty that is already there.