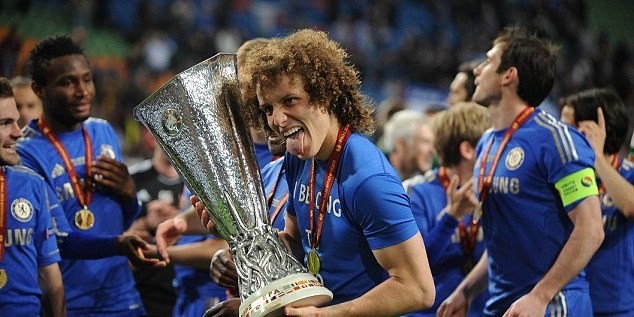 Here, we’re bringing you all the major Chelsea transfer news in the form of live blog / commentary covering the final few hours of the 2016 summer transfer window.

9.10 am – We will be keeping a close eye on several deals today. Marcos Alonso is likely to complete his move from Fiorentina today. There is also a reported interest in PSG defender David Luiz. Plus, a lot of Chelsea players could go out on loan today.

This is probably the biggest hint that Alonso’s transfer will definitely happen today – the Fiorentina defender has started following Chelsea FC on twitter.

The Chelsea winger was spotted with his agent at St. James’ Park last night. He has undergone a medical at the Tyneside club and will complete his transfer today.

His agent has posted a picture on social media of him with the player on the pitch at St James’ Park.

The Blues have made a formal bid to sign their former defender, according to French publication L’Equipe, the deal thought to be in the region of €41m.

Luiz has dropped down the pecking orders behind Thiago Silva and Marquinhos at PSG, but Unai Emery wants him to be a part of the squad.

According to journalist Lee Clayton, PSG have rejected a £32m bid for David Luiz. Both the clubs are still locked in negotiation and the deal might take place under £40m.

According to France Football, Chelsea have opened talks with Valencia over the possible signing of central defender Aymen Abdennour on loan.

The summer #transferdeadlineday started with Spurs making a formal move for Newcastle United midfielder Moussa Sissoko. Spurs had offered £16m for the midfielder but it was way below Newcastle’s £30m valuation.

According to the latest report from L’Equipe, Chelsea have joined the race for Sissoko as well and the Blues are currently holding talks with the player’s agent over a possible transfer

Daily Mail’s Lee Clayton claims Chelsea have agreed a £32m deal with PSG for Luiz. The medical may take place after the 11pm deadline.

According to Le Parisien, David Luiz took the Eurostar this afternoon to visit London and complete his move to Chelsea. The Blues have apparently reached an agreement with PSG, although the details of the transfer are yet unknown at the moment.

According to Sky Sports, David Luiz will undergo a medical with Chelsea in London at around 18.00 local time, ahead of his big money move from PSG.

David Luiz to have @ChelseaFC medical in London at 6pm #DeadlineDay

Juventus sign Cuadrado (again) on loan with a view to make the deal permanent.

Juve can sign the player for €25 million and are due to pay Chelsea €5m per season for the duration of the loan.

18:50 pm: Chelsea reach agreement with PSG for the transfer of David Luiz

It’s official. Chelsea have reached an agreement with PSG for the transfer of their former defender, David Luiz, the Blues have confirmed on Twitter.

.@ChelseaFC and Paris Saint-Germain have agreed terms for the transfer of David Luiz back to London… https://t.co/oaz3h0bEHb

That’s all for today. Thank you everyone for reading this blog.