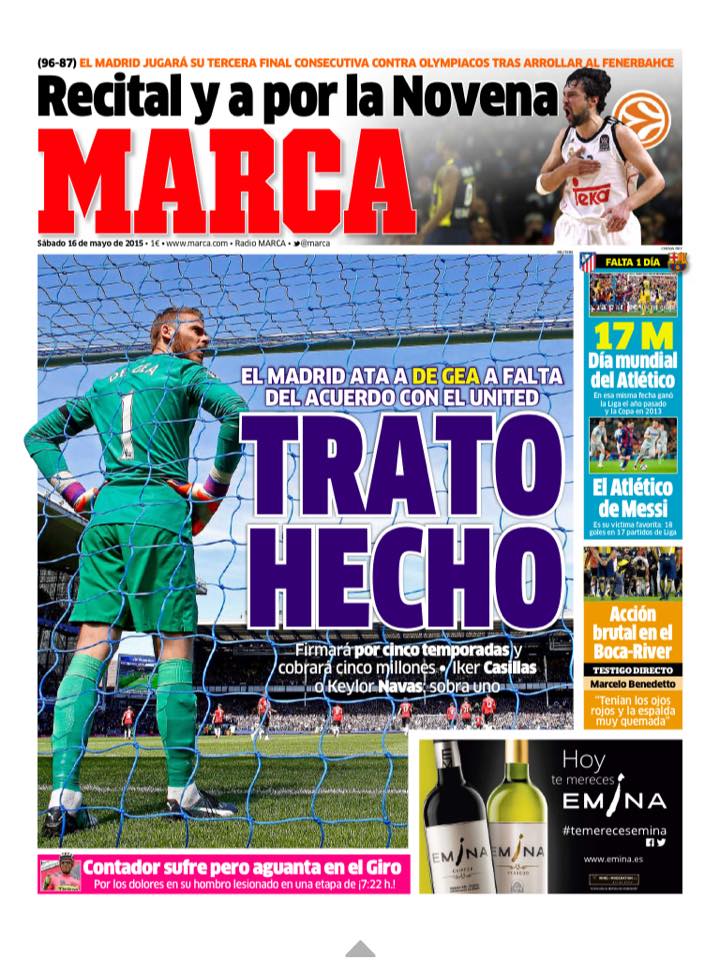 That’s the front page of today’s Marca. It says: “Trato Hecho” that translates to “Done Deal.” Inside they have covered the full story, which you can see below. 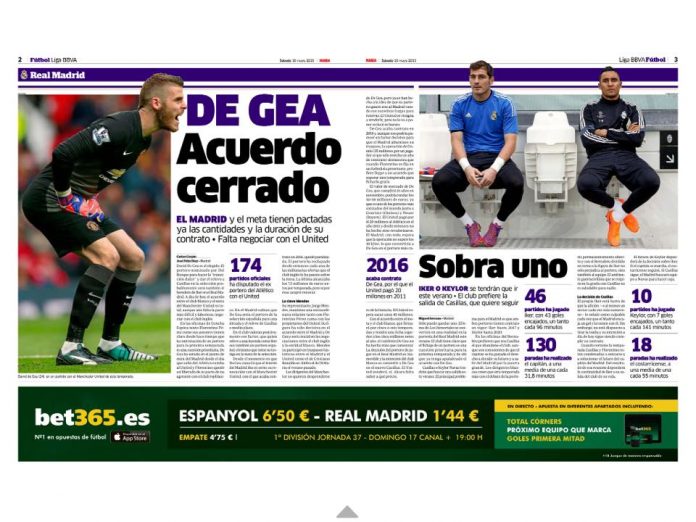 The report says Madrid have already agreed a personal deal with David de Gea but they have yet to reach an agreement with Manchester United.

For the past six to seven months, Madrid press were constantly feeding this idea that they would sign De Gea in the summer. Few things have gone in their favour:

a) De Gea’s outstanding form for United that forced Del Bosque to make him Spain’s no 1 replacing Iker Casillas. Real Madrid now want the same to happen for the club as well, as doubts grow over the long term future of Casillas.

b) De Gea has been offered lucrative contracts which would make him the highest paid goal keeper in the Premier League, but he has rejected all offers from United. Why? Many say, he wanted to make sure United get into the Champions League before taking the decision, while there are suggestions that he is actually waiting for an offer from Madrid.

c) United’s interest in Gareth Bale and a potential cash plus player (De Gea?) transfer to land the Welshman has been reported.

d) United are looking to keep Radamel Falcao in order to please Jorge Mendes which in turn will help the club persuade De Gea to stay. Silly idea. Mainly coming from the English press.

The timing of this news is just about perfect. Only 24 hours back, Louis van Gaal was telling the press that United were looking for other goal keeping options which might have added fuel to the fire resulting in Marca’s eye-catching front page story.

Marca claim an agreement has been reached between both the club and the player. They claim Real Madrid always wanted him since he was at Atletico and the club officials were aware of his vast potentials.

Jorge Mendes can play a key part here. He holds a special relationship with Florentino Perez as also with United. He was instrumental in arranging big transfers between both the clubs in the past – Cristiano Ronaldo in 2009 and Angel di Maria last summer – and he is expected to play a key role here as well during the negotiations for De Gea.

United would ask for €40-45m for De Gea, but Madrid expects to conclude the deal within €30m, which would still make De Gea as the most expensive goal keeper in the football history. Plus, he would be given a five or six years contract where he would earn around €5m per year.

It is quite obvious that Madrid press will be pushing hard for stories like this, but they have yet to seal the deal. Manchester United fans have every reasons to worry about but the club will not sell their precious asset as per Madrid’s demands, even if De Gea decides to leave the club.