The football shirts of the Croatian National Team are among the most distinctive in world football, with their red and white chequered home shirt and blue away kit.

For their new Euro 2012 soccer jersey, Nike have combined both designs into the away kit, which retains the traditional deep blue tone while adding in the red and white checked detail into the shoulder of the shirt.

Croatia face a difficult task this summer just to make it out a group which contains former World and European Champions Spain and Italy, as well as the Republic of Ireland, but have enough quality in their ranks to shock their more fancied opponents, much like they did in 2008 when they qualified at the expense of Steve McClaren’s England.

The Croatia away Euro 2012 football shirt is available to purchase in the Soccerlens store in both adult sizes S, M, L, XL, XXL and also in a range of kids sizes small boys, medium boys, large boys, XL Boys.

We offer a full range of official Nike printing for all your favourite Croatian stars past and present including Luka Modric, Niko Kranjcar, Davor Suker, Zvombir Boban, Ivica Olic, or why not choose your own name and number?

This is the official Nike jersey to be worn by Croatia in the Euro 2012 Finals and also the qualifying campaign for the 2014 World Cup, which will begin in September. 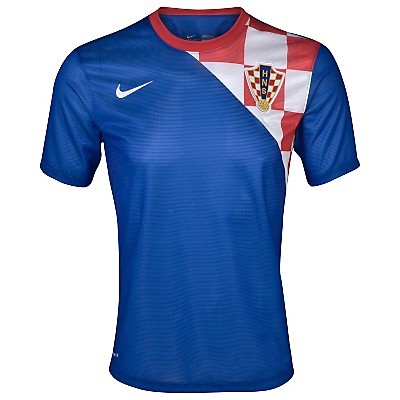 Click here to buy the Croatia Euro 2012 away shirt.

Why have Tottenham collapsed?
Chelsea v Tottenham: London rivals ready to do battle at Wembley
Tweet Pin It