Manchester United take on Newcastle United on Saturday at 3 pm BST. To celebrate the return of a certain Cristiano Ronaldo, bookmakers are serving up great deals & giving away free bets. Read on to learn more about these special promotions and how to claim them:

If you’re looking to celebrate the return of probably the greatest player to ever participate in the English game by placing a wager, read on: the team at sportslens has mined the juiciest offers and deals from the UK’s best betting sites and listed them below for your convenience.

How long these great odds and promotions will remain available is anybody’s guess. So act quickly to take advantage of the fact that Ronaldo always scores, and sign up today to get advanced odds and bonus rewards from our betting partners.

888sport is running a special offer on Cristiano Ronaldo scoring the first goal of the game vs. Newcastle United tomorrow afternoon, and are boosting the Portuguese’s price from 2/1 to a massive 16/1. It’s a max bet of £5 but a £5 bet on Ronaldo will return £85!

In order to claim the exclusive 888sport enhanced odds

Click Here to get 16/1 odds on Ronaldo First Scorer

Why bet on Ronaldo’s Return?

Cristiano Ronaldo has been back at United’s Carrington training complex since early this week and, in an interview with former United teammate Wes Brown, the Portuguese superstar jokingly admitted that he has been putting pressure on Ole Gunnar Solskjaer to start him in Saturday’s game.

If Ronaldo starts, there’s nobody else on the field more likely to score first than he is: the man has 674 career league goals to his name, so 888sport’s 16/1 enhanced odds are as attractive and as safe a bet as you’re ever likely to find. Of course, nothing is certain in the world of sports gambling. But Ronaldo netting a screamer on his return to Old Trafford just feels nailed on: Ronaldo always scores (and always did have a habit of scoring vs Newcastle, too).

Other Selected Betting Odds on Cristiano Ronaldo vs Newcastle

888sport isn’t the only bookmakers offering great odds and enticing deals in tandem with Ronaldo-fever, mind. Read on to see what other lines and odds are doing the office rounds 24 hours before kick-off.

There’s not much of a difference among the premier UK sportsbooks when it comes to the odds on Ronaldo to score at any point in the game vs Newcastle tomorrow afternoon. The vast majority of bookies are broadcasting odds of around about 1/2.

If you want to place a free bet on the eventuality that ‘The Winker’ marks his return to Old Trafford with a goal, however, BoyleSports is offering competitive 5/2 odds and a £25 free bet bundle.

Bet on Ronaldo to Score Anytime at 5/2 with Boylesports

Cristiano Ronaldo famously hates missing even a single minute of action out on the football pitch. But, there is a chance that Ole Gunnar Solskjaer opts to at least reintroduce the former Juventus man slowly into the first team.

If the team news is announced at 2.30 pm BST tomorrow, and Ronaldo is on the bench, placing a wager at Unibet for the Portuguese star to score the final goal of the game is a safe pick, especially at 21/10.

UNIBET also offers new customers a money-back welcome offer – losing bets receive up to £40 back in bonuses, meaning you can calmly wager on Ronaldo to score last, and if he doesn’t, no sweat: you get more money back anyway.

To claim this offer, simply click the link below to get to UNIBET, and follow the steps as listed:

Bet on Ronaldo to Score Last at Unibet

Mere mortals don’t often bag themselves a hattrick on their debut. Ronaldo is no mere mortal though: the former Madrista boasts 56 career hattricks to date – 56!

If you’re feeling lucky and wish to back the United striker to the hills tomorrow, do so with William Hill’s excellent 17/2 odds.

The long-serving bookies is also offering football betting promotion for the weekend whereby all newcomers to the site can bet £10 to get £30 in free bets. If this is something that interests you, feel free to pay William Hill a visit by clicking the link below

Bet on a Ronaldo Hat Trick at William Hill

Bruno Fernandes has established himself as United’s regular penalty taker, beating out the likes of Paul Pogba and Marcus Rashford for the honor.

With Ronaldo now returning to the fold, there’s a chance we see a bit of disharmony come penalty time should United be awarded one – it’s no longer clear who the specialist is, and this uncertainty regularly leads to penalty misses.

Bet365 has odds of 10/1 for such an event coming to pass. You can sign up to wager on bet365 by clicking the link below:

Bet on Ronaldo to MISS a Penalty at bet365

Manchester United to win: 2/9 at Betfred 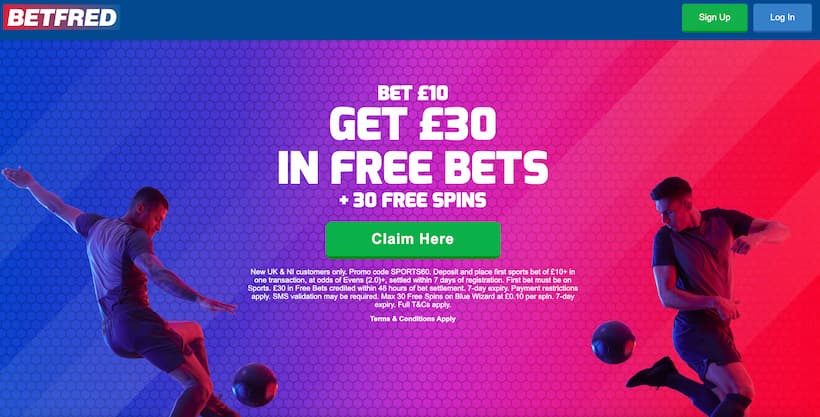 BetFred is broadcasting among the very best odds on a straightforward Manchester United home win vs Newcastle tomorrow. The fractional odds are listed at 2/9, and newcomers to the bookies can enjoy a handsome welcome bonus: bet £10 to get £30 in free bets.

It would take a brave man to bet against Harry Maguire and co. getting the job done tomorrow afternoon, so 2/9 looks a nailed-on winner. Though you might wish to make an ACCA, consisting of the result, plus Ronaldo to score, and the number of corners (etc.) – for even better odds.

To sign up to Betfred and claim your free bet, simply sign up via the link below:

Get £30 Free at Betfred This Weekend

Best Bet of the Weekend

It’s hard to look past 888sport’s excellent 16/1 offer on Cristiano Ronaldo to score the first goal of the game vs Newcastle. So long as Solskjaer starts his new talisman, surely the goals will follow quickly.

Click Here to get 16/1 odds on Ronaldo First Scorer