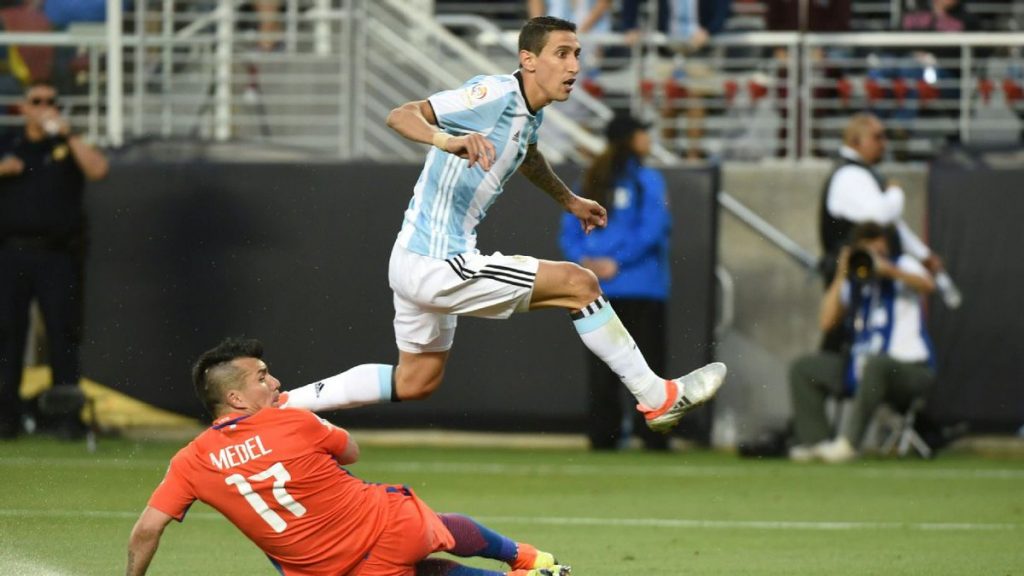 Lionel Messi was just a mere spectator from the bench as Argentina opened their Group D Copa America campaign with a 2-1 win over Chile in Santa Clara on Monday.

Earlier in the day, Blas Perez scored twice, including the winner three minutes from time, as Panama began their first-ever Copa American campaign with a 2-1 Group D win over Bolivia in Orlando.

Here’re the results at a glance:

a) Well.. what was that? Nobody expects either Panama or Bolivia, or both, to qualify from a Group that also feature World #1 Argentina and defending Copa champions Chile. Yet, at the end of the day, Panama find themselves second in the table (joint first actually) while Chile at rock bottom. Can they pull up a major upset here?

b) Bolivia are the lowest-ranked team in the tournament, per FIFA table, and they didn’t have a good preparation heading into Copa 2016. It was evident in the opening 45 minutes when looked disjointed and the players chased their opposition numbers like shadows, running around cluelessly as if they haven’t got any plan in place.

It went from bad to worse for them when Panama took the lead in the 11th minute through Blas Perez. Alberto Quintero picked out Perez, who cooly slotted the ball past Carlos Lampe.

c) In the second half, Bolivia did put up a decent fight, but it was still clumsy, physical, and devoid of creativity. Hardly any players showed control over the ball and both teams lacked cohesion in their approach. Seven yellow cards were issued with as many as 21 different players being fouled during the game.

Bolivia somehow managed to equalise, after Juan Carlos Arce collected a terrible free kick clearance from Harold Cummings to restore parity in the 54th minute. They had a golden chance to wrap up the game with five minutes remaining but Luis Tejada fired high and wide after being gifted acres of space in the Panama box.

d) Not many teams in world football boast such a vastly talented attacking squad than Argentina. The likes of Lavezzi, Aguero, Lamela and Pastore were on the bench alongside Messi against Chile. These players are good enough to play in the first XI of any side in the world.

The absence of Messi was hardly felt. Angel Di Maria, Gonzalo Higuain and Nicolas Gaitan started off as the front three attacking forwards in a 4-3-3 system, with the Benfica star being used in place of the injured Messi.

Argentina stressed on wing play; the two wingers nearly combined for a dream opening start when Gaitan’s header hit the bar from a Di Maria cross.

f) Chile created a few good chances and looked threatening at times but there was no real calculated approach to their attacks. The midfielders gave away possessions too cheaply but their lack of ruthlessness up front came back to haunt Juan Antonio Pizzi’s side.

A miss pass from Funes Mori was intercepted by Marcelo Diaz and after a string of quick passes Alexis Sanchez was presented with a great chance in the 25th minute but he was denied by Argentina goalkeeper Sergio Romero.

Jose Pedro Fuenzalida pulled one back in the 93rd minute when Romero failed to clear the free-kick, but it was all but a mere consolation goal in the end.

g) In the second half, a change in tactics made all the difference for Martino’s side. Argentina pressed high up the pitch, snatched the ball at important positions and pushed bodies forward to which Chile had no answers how to stop them. The two goals have been explained here.

h) Di Maria dedicated his goal to his grandmother who passed away few hours before the game. He broke down in tears during the post-match interview.

i) On a lighter note, for the second day running, Copa America Centenario organisers suffered yet another embarrassment, when Pitbull’s single “Mr. Worldwide” interrupted the conclusion of Chile’s anthem. Such a shame!