The Copa America kicked-off yesterday in Venezuela with a couple of less than important matches and a colorful opening ceremony. The Pueblo Nuevo Stadium in San Cristóbal hosted a huge fireworks display and dancers dressed in Venezuelan national colors to mark the start of the competition, held in Venezuela for the first time.

The opening match pinned the hosts against Bolivia with the Venezuelan president Hugo Chavez and his Bolivian counterpart, Evo Morales looking on.

An incident was noted prior to the start of the match when a group of fans booed the leftist Venezuelan leader. Though they were quickly silenced when the the presence of Argentine football legend Diego Maradona was announced through the PA system. Maradona is an avid Chavez supporter. 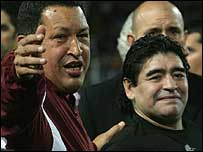 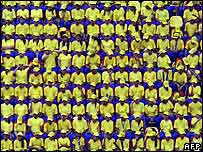 Maldonado opened the scoring after 21 minutes of play when he fired a shot past the diving Bolivian keeper. The Bolivians fought back and were helped by a Venezuelan own-goal deflection off a Jaime Moreno shot in the 39th minute. Venezuela looked set for the victory after they temporarily regained the lead when midfielder Ricardo Paez chipped past goalkeeper Hugo Suarez with a breakaway goal in the 62nd minute. But Bolivian playmaker Juan Carlos Arce had the final word as he tipped in the equalizer with seven minutes remaining. The home side was thus denied it’s second ever tournament victory.

Earlier, at the Metropolitano Stadium in Merida, a confident Peruvian squad squashed a sluggish Uruguay three goals to none. The impressive attacking force of Jefferson Farfan, Chelsea’s Claudio Pizarro and Hamburg’s Paolo Guerrero buried Peru’s reputation for ineffective football as they pounded through the Uruguayan defense. The Uruguayans began the stronger of the two sides as Villarreal striker Diego Forlan squandered two good chances to open the scoring.

A poorly marked Miguel Villalta converted a Farfan cross heading Peru into the lead in the 27th minute. In the 73rd, substitute Juan Carlos Marino stunned Fabian Carini as he whipped in the second. A wide open Guerrero tapped in the third on a pass from Andres Mendoza after he was denied a goal in the 1st half as it was deemed offside by the referee.

Uruguayan Manager Oscar Tabarez has been the target of heavy criticism prior to the start of the tournament, and it has not gotten easier for him as has fails to deliver again. Uruguay holds the record for the most Copa wins (14, tie with Argentina) and have been regarded as the perennial dark horses of the tournament. Their lineup is perhaps the most impressive after Argentina’s and Brazil’s (Diego Forlán, Ãlvaro Recoba, Jorge Fucile, Cristian Rodriguez, Diego Lugano, Fabián Carini), their loss to a team ranked 34 places lower has to be pondered seriously.

Defending champion Brazil faces Mexico today in Puerto Ordaz after Chile takes on Ecuador in the same stadium. Argentina, the 2004 runnerup, opens against the U.S. tomorrow in Maracaibo.