Few would argue, as Gameweek 4 of the 2014/15 season draws to a close, that Chelsea have been the standout team thus far. A maximum haul of 12 points, with 15 goals scored, is about as good as it gets when it comes to getting off to a good start.

Saturday’s 4-2 win against Swansea City was an extremely impressive perfoamance, with great character being shown by the side after an indifferent start that had seen them fall behind. Diego Costa’s hattrick, which took his tally for the season to 7, along with a debut goal for French striker Loic Remy, meant that the optimism surrounding the club increased considerably.

One aspect though, which has not been as impressive as expected for Chelsea thus far, is the defence. It is surprising really that a side managed by Jose Mourinho should concede 6 goals in their opening 4 league games. A solid backline is at the base of the Portuguese’s footballing principles, and despite his team’s tremendous start in an attacking sense, he will be slightly concerned by the number of goals let in.

Over the last decade, the Chelsea defence has been one of the best in the league. In the 2004/05 season, Mourinho’s first campaign in his initial stint at the club, the team only conceded 15 goals. This staggering tally is, as you would expect, a Premier League record, and is unlikely to be replicated in the near future.

Last season too, when Chelsea had several problems attacking-wise, they had the best defence in the league, conceding only 27 goals. Branislav Ivanovic, John Terry, Gary Cahill and Cesar Azpilicueta were all brilliant, both individually and collectively. Terry and Cahill were arguably the best centre-back pairing in the entire league. 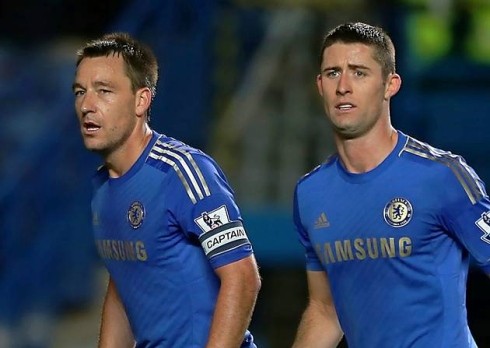 The back 4, along with the goalkeeper, have not been culpable for all the goals let in. Thibaut Courtois, who has replaced Petr Cech between the sticks this season, has hardly done much wrong, while the defence is exactly the same as it was last year. The fault thereby, lies elsewhere on the pitch.

This season, in the 4-2-3-1 formation adopted by Mourinho, Cesc Fabregas and Nemanja Matic play in the pivot just in front of the defence. While Matic is adept at tackling, intercepting and winning balls back for his side, Fabregas’ defensive work-rate is suspect. The Spaniard’s main intent in every game is to go forward and join in the attack, and his reluctance to track back leaves a gaping hole in the Blues midfield. This role was, in the last season, played by either of Frank Lampard, Ramires or John Obi Mikel, all of whom are defensively better than Fabregas.

But Fabregas’ attacking prowess cannot be done without for Chelsea. The former Arsenal man already has 6 assists to his name in 4 games, and is the highest on that list by a long margin. Therefore, to accommodate him in the side, Mourinho may need to adopt the 4-3-3 system week-in, week-out.

The addition of a third midfielder, who will mostly likely be Ramires, adds a lot more security to the Chelsea team. Even though the Blues conceded 3 at Goodison Park against Everton last Saturday playing this system, its adoption helped them settle into and consequently dominate the game yesterday.

Mourinho knows that depending on his strikers to do the business every single time is risky. There will be times when the forwards have an off-day and the team will need a clean sheet to have any chance of getting something from the game. Against top sides in England and Europe, conceding cheap goals will prove fatal.

The 4-3-3 would though, mean that at least two of Oscar, Willian, Andre Schurrle and Eden Hazard would miss out everytime. But, defensive solidarity is a must for Mourinho, as his comments after the Everton game, where he openly expressed his dissatisfaction despite a 6-3 win, clearly illustrate.

Next week’s encounter at the Etihad Stadium against Manchester City is a game where Chelsea cannot afford to be too generous at the back. It will, as a result, be interesting to see how they set up, as John Terry and Co. aim to find the optimum combination of attacking prowess and defensive stability.