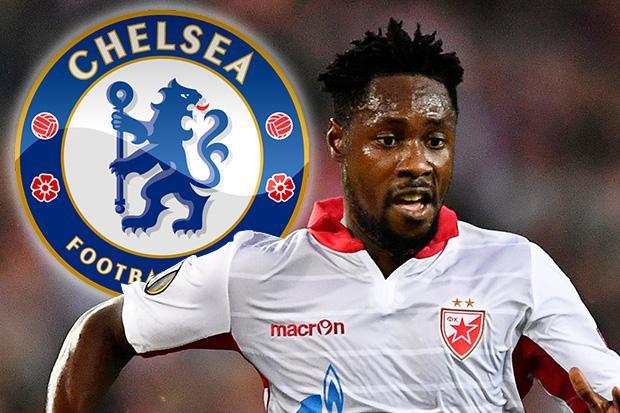 The Ghanaian international knows Antonio Conte from their time at Juventus together. Although Boakye was loaned out during his two-year spell in Turin before securing a move to Atalanta.

It does, however, appear the blues boss is on the lookout for more striking options with Alvaro Morata and Michy Batshuayi the only target men at his disposal.  Also, it has also become clear the Belgian is not fully trusted by the Italian.

24-year-old Boakye has netted an impressive 39 goals in 48 appearances during his 18 months at Red Star. He also has 6 goals at international level having appeared for the Black Stars on 12 occasions.

The Red Star attacker would appear an unlikely target compared to other bigger names that Chelsea are used to being linked with. He has yet to play regularly at the very highest level and some fans might question “Why would the club want him”?

The same could have been said of another African who signed for the blues in 2004… Didier Drogba. The Ivorian had one season at Marseille before his move to West London. Prior to that he had only appeared in the lower leagues in France.

Similarly, Boakye has spent a lot of time out on loan in Serie B, as well as spells in the Netherlands with Roda JC and Elche in La Liga. It’s his time in Serbia that has really shown what potential could be realised if he’s given regular game time.