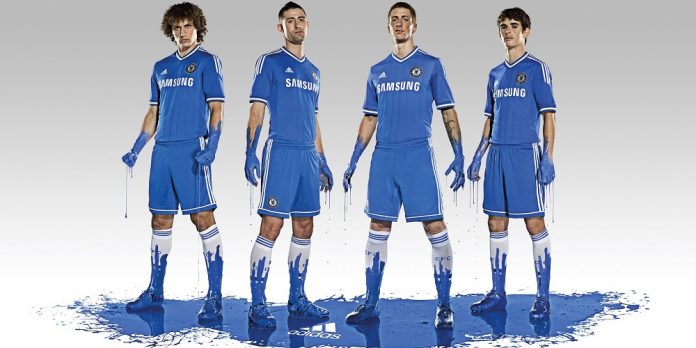 Earlier this month, adidas launched a new campaign called ‘It’s Blue, What Else Matters’ to celebrate the launch of the Chelsea 2013-14 home kit. The campaign aimed to encourage fans to go ‘all in’ and buy the new kit without seeing it.

The new kit takes its inspiration from legendary shirts worn by the Chelsea greats in the past and the club crest also reverts back to a four colour design.

The campaign launch took the world by a storm. The teaser video (that can be seen here) of Chelsea stars showing what it means to be committed to the club received over 1.5 million views on YouTube.

It featured John Terry, Juan Mata David Luiz, Gary Cahill, Fernando Torres, Demba Ba, Eden Hazard, Oscar and Petr Cech and it was a break from the norm. The campaign posed one question to all the Chelsea fans regarding the 2013-14 home kit: it’s blue, what else matter? – a call to order the shirt without seeing it.

A spokesperson from adidas commented:

“We’ve seen what it truly means to be blue from the Chelsea fans.

“We started with the insight that Chelsea is the only club that can own blue as a colour in the Premier League – it is their song after all.

“The viral and iconic imagery that now adorns the club has shown the lengths that the players will go to for the club and the reaction from the fans has been outstanding”.

The traditionally styled blue kit features the latest adidas technologies to ensure that it not only evokes the meaning of being a true Blue but give Chelsea and edge on the pitch.

The shirt is integrated with technologies like TechFit and Climacool to help improve speed, endurance and awareness while keeping the heat and moisture down to an optimum level with the help of ventilation channels and 3D fabric.

The 2013-14 Chelsea home kit is available now for pre-order and will go on sale on Wednesday, May 15th, 2013. For more information or to pre-order the new kit, visit www.chelseafc.com/allin.