Chelsea made it seven wins in a row to remain top of the league with a 2-1 victory against Tottenham Hotspur at Stamford Bridge. The Blues conceded their first goal in 600 minutes when Christian Eriksen scored an absolute beauty to give Spurs the lead inside the first quarter of an hour.

Antonio Conte‘s men dug deep, and found answers either side of half-time through Pedro and Victor Moses to complete the comeback. Without a doubt, this was the closest match in Chelsea’s winning streak, and the fans will be extremely happy to see the fight the team displayed. Spurs, on the other hand, succumbed to their first defeat of the season in the Premier League, in their 13th match.

Here are 5 major talking points from this fascinating London derby:

1) A bolt from the blue stuns Chelsea

Christian Eriksen has been nowhere near his best this season, but the Dane proved his class in the 11th minute by opening the scoring with an absolute peach of a volley. Spurs had started really well, and Harry Kane had had a goal ruled out for offside.

However, a few minutes later, Eriksen latched on to a ball on 25 yards from goal and let it rip. The swerve and the power was too much for Thibaut Courtois to handle, and the Belgian’s clean sheet run was over. The game hadn’t begun as planned for Chelsea, but this goal was still a shocking blow to them. 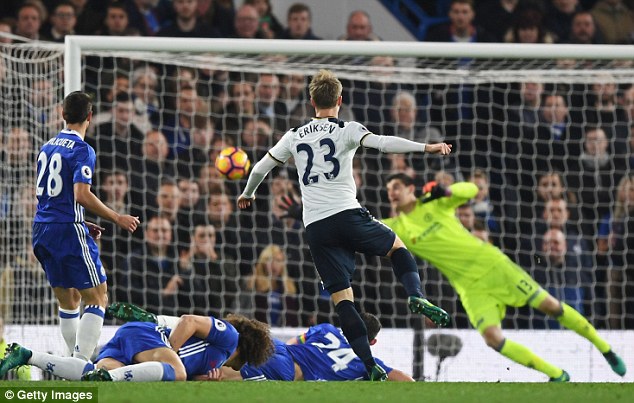 2) Spurs dominate the first half, Wanyama and Dembele run the show

Mauricio Pochettino‘s men were brilliant during the opening period, and gave Chelsea a lot to think about with their high-pressing game. Moussa Dembele and Victor Wanyama ran the show in midfield, and N’Golo Kante and Nemanja Matic were second-best in almost every tackle they went into.

Spurs were also able to get the ball into the feet of Son Heung-Min on the left on a regular basis. They didn’t create too many clear-cut openings for a second goal, but seemed in complete control of the match. Diego Costa and Eden Hazard, Chelsea’s two main forward men, were stifled expertly.

3) A moment of magic turns the tide

It looked like Chelsea would need something special to get back into the game, and that is exactly what they got, right on half-time. Pedro picked up the ball on the edge of the box and despite nothing seemingly on for him, curled an absolute beauty into the corner. The Spaniard has been one of the players who have benefited the most from Conte’s arrival, and this was arguably his best Chelsea goal till date. The entire mood around Stamford Bridge changed in a jiffy, and the team’s spirit was visibly lifted.

4) Chelsea consolidate momentum in the second half

The shift in momentum continued into the second half, and it took just ten minutes for Chelsea to score their second. Costa did well on the left and drove a low cross into the box. It evaded everyone, but found a late run from the right wing-back, Victor Moses. The Nigerian finished past Hugo Lloris to complete the turnaround.

The Blues were dominant thereafter, and started winning every one-on-one battle on the pitch. Marcos Alonso and Diego Costa had chances to extend the lead but were unable to find the target from close range. All in all, it must have been really pleasing for Conte to see the spirit and character shown by his team. In the past month, they have been comfortable in nearly every game they’ve played. But this time, things were different. Spurs brought out the best in them, and they delivered.

The league leaders’ next assignment is a trip to the Etihad Stadium to take on Manchester City. Pep Guardiola‘s men haven’t been in great form of late, but are placed 3rd in the table, just one point behind Chelsea. This is going to be an incredible battle of wits between two of the best managers in Europe. City will certainly be looking for the win, while Chelsea may be happy with a draw, as well.

However, extending the winning run to eight games will be something Conte would be looking for. We are less than half way through the season, but the table is starting to take shape. Both these teams are expected to be right in the thick of the title race come the end of the season, and will look to make a huge statement of intent next Saturday in Manchester.