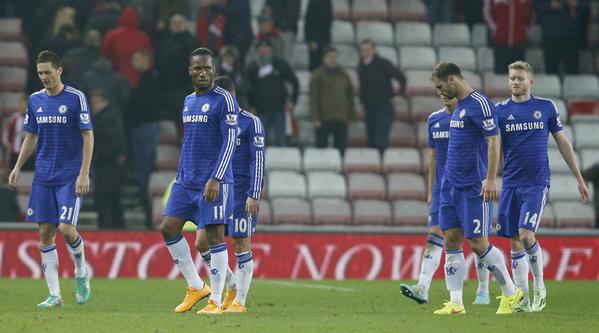 Sunderland gave a good account of themselves at the Stadium of Light on Saturday’s late kickoff as they held Chelsea to a scoreless draw. Gus Poyet’s side however will be disappointed not to have landed the killer blow despite dominating in the later stages of the encounter.

As Jose Mourinho’s hailed Sunderland’s impressive defensive performance, the Blues manager also claimed that his side did everything to score the decisive goal but were time and again denied by the immense work rate of the home side.

This was the first time the the Blues were denied a goal in the Premier League this season. We take a look at why the League leaders failed to hit the back of the net.

Chelsea’s lack of width: It was alarming to see that neither of the two Chelsea full backs Branislav Ivanovic and Cesar Azpilicueta making runs up front to create chances for their side. Only once did Ivanovic make space for himself in the first half but his low drive was well saved was Pantilimon.

Gus Poyet at the end of game correctly remarked, “We tried to be compact and force them wide – but they didn’t go wide which helped us a little bit!”  With all of Hazard, Oscar and Willian preferring to go direct, it played into the hands of Sunderland who congested the middle of the park. Diego Costa too dropped deep to aid play but was blocked off time and again by an aware back four. 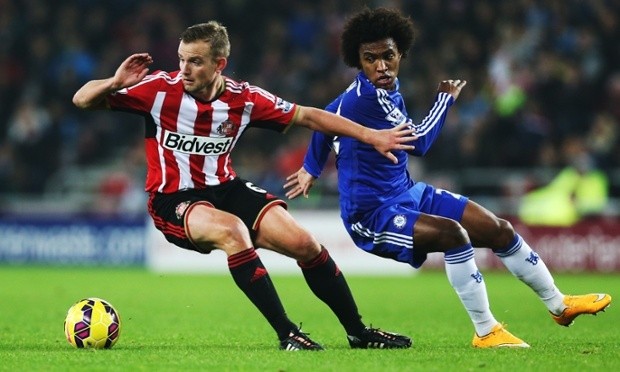 Sunderland’s almost perfect game plan and tactics: Gus Poyet’s side had an almost perfect game plan. Sunderland would soak pressure right from the start, hardly allow an inch of space to Chelsea’s attacking triumvirate and then hit the Blues on the counter. The Black Cats’ performance was summed up Lee Cattermole’s immense work rate who tirelessly broke down Chelsea’s build up and always was a willing runner to make sure there was an extra man when the home side countered. The 26 year old made eight recoveries three clearances and also got in two invaluable blocks for his side.

Poyet’s double marking strategy on Hazard could be exemplary to other teams to follow suit but Sunderland would be disappointed not to have got 3 points from the game. Connor Wickham and Jozy Altidore had two great chances to ensure full three points but the best chance fell to Adam Johnson who inexplicably fluffed his shot from close range. Santiago Vergini also hit the woodwork as Poyet’s side came agonizingly close.

Mourinho’s same set of players: Chelsea played their third game in 7 days and Mourinho surprisingly has played an unchanged eleven in every match. Players are bound to be tired and it was clearly on show as the Blues failed to make a clear cut opening. Sunderland however were fresh but Mourinho did try to win the game late own introducing attacking players in Schurrle, Remy and Drogba but by then his team’s midfield had failed to gain control of the match. With fixtures piling up and Mourinho’s desire to win every competition he enters, rotation would be key for Chelsea this season.