With the domestic campaigns well underway now, all eyes are on the UEFA Champions League which kicks off next month.

The draw for the group stages are almost upon us and here at Soccerlens, we will bring you live coverage from the draw, which takes place on Thursday in Monaco.

Real Madrid will be looking to defend their European crown after having beaten arch rivals Atletico Madrid to the trophy last season. Spanish champions Barcelona will want to bounce back strongly after a disappointing European campaign last season.

Bayern Munich will be hoping for better luck in Europe under Carlo Ancelotti and the Premier League sides will want to fix their poor showing in Europe over the last few years.

The likes of Tottenham and Leicester will have a lot to prove in Europe. Both sides need to show that they are not present just to make up the numbers.

Arsenal and Manchester City will aim to improve their knockout round record and go all the way this season. 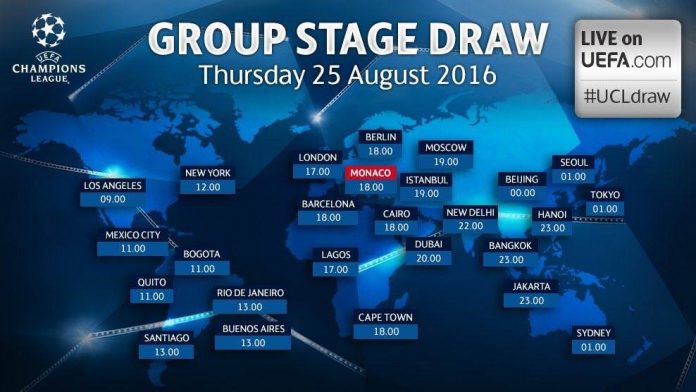 Here are the pots for this season’s Champions League draw

We will also find out who the UEFA player of the year is, today.

Here is how the Champions League draw looks

The official result of the #UCLdrawpic.twitter.com/WxbnD5tLEP

One of Gareth Bale, Antoine Griezmann or Cristiano Ronaldo will soon be announced as the 2015/16 UEFA Best Player in Europe.

Cristiano Ronaldo is the 2015/16 #UEFABestPlayer in Europe!