Rangers are still 10 points clear at the top of the Scottish Premier League after a 3-0 win over Falkirk at Ibrox. In honesty, it was a pretty flat game with the class of Steven Davis playing a big part in deciding the result.

The Northern Irish midfielder scored the first for Rangers after 18 minutes with a superb free-kick from 25 yards out. Davis then notched his 13th assist of the season with a lovely pass across the face of goal for the on-rushing John Fleck who managed to sneak the ball into the net. 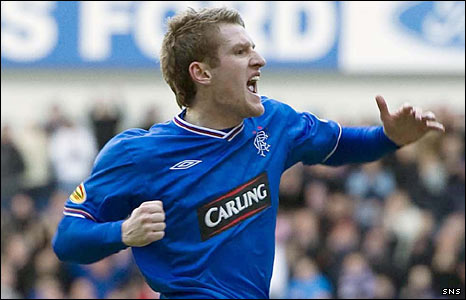 Steven Davis, a stand-out for Rangers this season

As the tempo decreased dramatically and Rangers almost played the game at walking pace, Steven Whittaker produced a moment of real brilliance when he spun on the edge of the box and fired home a good finish from 7 yards out. Despite being rooted at the bottom of the SPL, credit to Falkirk who I thought had a decent game and the front three of Showunmi, Flynn and Compton posed a threat to the Gers defence all game. 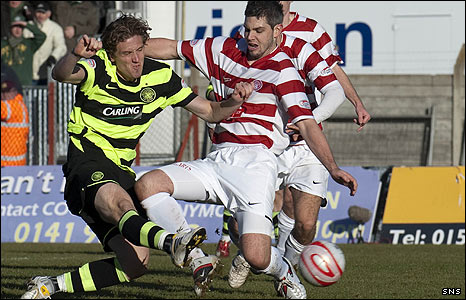 The other-half of Glasgow went home happy aswell as Morten Rasmussen scored his first Celtic goal to give the Hoops a 1-0 win over Hamilton at New Douglas Park. The Danish striker pounced on a loose ball and fired in the winning goal after 67 minutes in a game that Celtic dominated for the majority of the match. Tony Mowbray also handed a debut to Jos Hoovield in the centre of defence and the Dutchman wasn’t put under significant pressure from Hamilton, who seemed happy to stick it out for a 0-0 draw. Marco-Antoine Fortune missed a late penalty for Celtic but they held on for a vital 3 points. 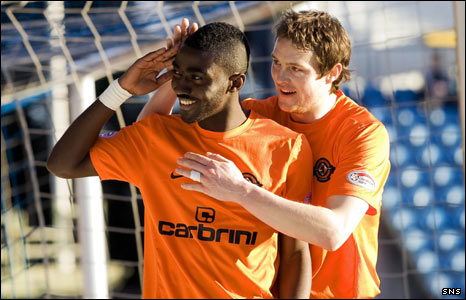 Without a doubt, the game of the afternoon was at Rugby Park as new Killie manager Jimmy Calderwood squared up to Peter Houston, who this week was confirmed as United’s interim manager until the end of the season. United took the lead after 16 minutes when Prince Buaben managed to take advantage of a mistake from Simon Ford and slot the ball into the net from close range.

The lead only lasted four minutes when Simon Ford bulleted home a header from a Bryson corner. Craig Conway got the second for United to put them 2-1 infront when David Goodwillie surged down the right-hand side and supplied an excellent cross for Conway who fired home a good finish. The Tannadice men seemed to be easing away to 3 points after going 3-1 ahead when Conway got his second after a neat chip over Cameron Bell.

Killie had to bounce back quickly, and they did through Kevin Kyle’s header from a Garry Hay corner. Kilmarnock equalised after 55 minutes when Manuel Pascali headed home past Pernis in the United goal. Craig Bryson nudged Kilmarnock infront with a superb volley but Jon Daly pegged Killie back to make it 4-4 from the penalty spot. 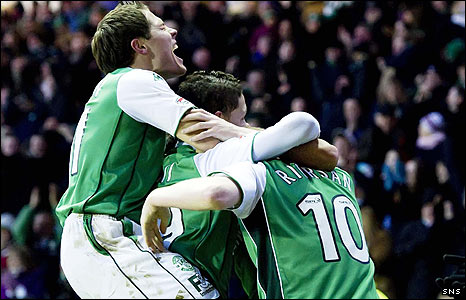 A big-goal for Hibs in their battle for 2nd place

St Mirren left Easter Road disappointed after losing a last-minute goal to surrender a point in a 2-1 defeat for the Buddies. The Saints surprisingly went ahead after 9 minutes when Sol Bamba, who had returned from African Cup of Nations duty with Ivory Coast, put the ball into his own net in a goalmouth scramble. Liam Miller got the equaliser for Hibs after 33 minutes when he broke through and slotted cooly past Paul Gallacher. In took another hour for Hibs to get the winner, when in the third minute of injury time Jack Ross headed the ball into his own net from an Ian Murray cross. A huge win for Hibs who now remain 2 points behind Celtic in the battle for 2nd place, both sides have a game in hand. 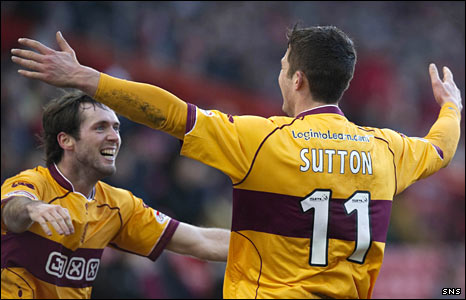 John Sutton played a part in every goal at Pittodrie

Craig Brown’s Motherwell side produced a magnificent display at Pittodrie to deny Mark McGhee a win against his old club as the Steelmen ran out 3-0 winners. John Sutton put the Well ahead after 29 minutes when he reacted quickest to Jim O’Brien’s saved shot. Motherwell went 2-0 ahead when John Sutton nodded the ball across to Lukas Jutkiewicz who was there to put the ball past Jamie Langfield. John Sutton then got his second of the game when he scored a real striker’s goal after reacting to Langfield’s save from Craigan’s header to slot the ball home. 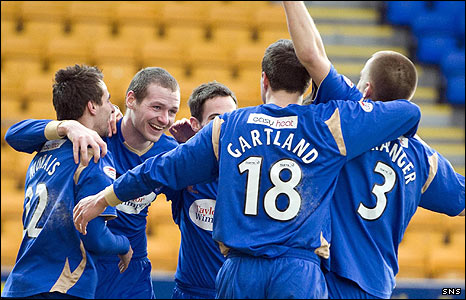 It was an eventful Friday for Hearts after manager Csaba Laszlo was sacked by owner Vladimir Romanov before appointing former Kilmarnock manager and former Hearts manager Jim Jefferies back to the hotseat. Jefferies’ first match ended in defeat for the Jambos boss after a 1-0 defeat away to St Johnstone. The “good doctor” Kenny Deuchar scored the only goal of the game to nod home Filipe Morais’ cross at the back post.