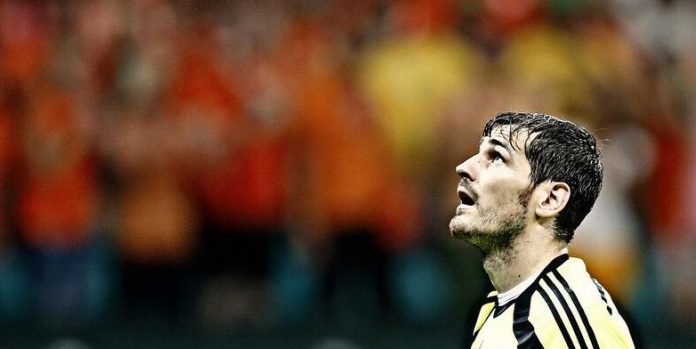 Emotions, drama, thrills, sheer ecstasy and chilling upsets. As the World Cup footballing extravaganza moves headlong into the second week in Brazil, we bring you some of the major tactical trends and talking points from the showpiece event. 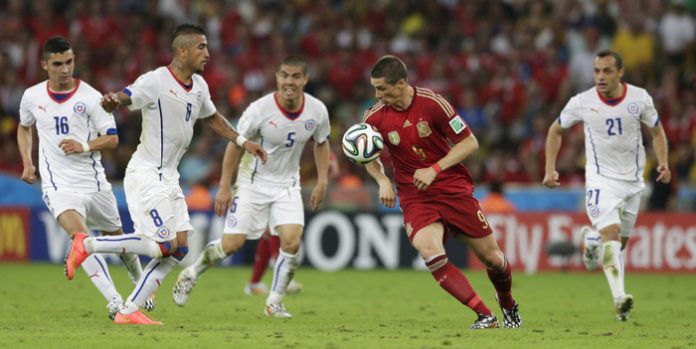 Chile were tactically the most fascinating side to watch in 2010 in South Africa under Marcelo Bielsa, deploying an attacking 3-4-3 formation who were relentless at pressing their opponents when they themselves were without the ball.

Jorge Sampaoli has simply picked up and has carried out the Beilsito model with three centre backs and two wing backs who shuttle up and down between defense and attack tirelessly. The Chileans were fast, aggressive, incisive and collectively irresistible as Spain failed to impose their tiki-taka footaball on Sampaoli’s side. Chile’s wide men up front Eduardo Vargas and Alexis Sanchez were simply sublime tracking back and credit goes to Sampaoli for instilling a defensive discipline on his attack minded players.

Spain looked lost in possession, pedestrian at their very best and lacking any significant attacking edge to cut open an extremely hard working South American side. Gary Medel probably was the epitome of Chile’s committed disciplinary performance as the Cardiff City player reveled in his centre back role.

Chile had three centre backs which is in lieu with Bielsa’s spare man philosophy. In fact, it has been refreshing to see quite a few number of teams deploying three proper centre backs in the heart of the defense. Rafael Marquez has done a brilliant job acting as a sweeper in the back three while Argentina too used it in the first half against Bosnia but coach Alejandro Sabella later shifted to a 4-3-3 system bringing on Gonzalo Higuain.

The Napoli forward repeatedly dragged one of the centre backs out wide with him to allow Lionel Messi to run in little pockets of space, the exact manner which led to his brilliant goal.

Do Brazil have a real gameplan?

Brazil’s gameplan since the last year’s Confederations Cup has been simple: Pass the ball to Neymar and hope for the best. Yet as Fernando Duarte points out after the Selecao’s goalless yet entertaining draw against Mexico: “They are much less lethal and much more jittery if their top scorer in the last four years does not escape his markers or produce moments of individual brilliance.” 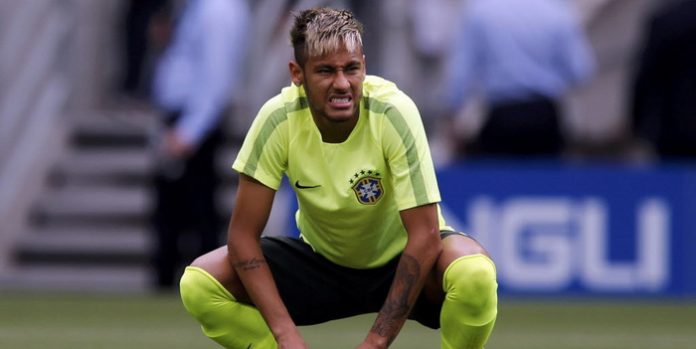 The goalless draw in Fortaleza against their continent rivals certainly exposed some of the major chinks in their armour. It’s true that Mexico did sit back for the majority of the first half but giving credit to only Guillermo Ochoa for the stalemate would be unwise.  Having a static forward doesn’t help in leading the line as Fred remained almost anonymous like in the Croatia game.

Hulk’s injury in his left thigh would have been a blessing in disguise for Scholari’s high pressing system with Ramires pulling the strings with his immense work rate on the right. The Chelsea midfielder’s speed an touch also helped Oscar to drift into a more central role, the one he features in under Jose Mourinho at Stamford Bridge.

As Miguel Herrera’s side blocked off Neymar, half of their job were seemingly done as the hosts were reduced to mere long balls from the backline to unplug a tight and compact defensive line. This asks for a bigger picture: Does Scolari have a plan B?

Is this the end of tiki taka?

Recent results in the Champions League seasons have shown that the possession based gameplan can be simply shattered by a more ruthless direct attacking approach. Barcelona were humbled by Bayern Munich two years ago in the semi finals by a 7-0 margin, while the Bavarians under Pep Guardiola were at the receiving end from Real Madrid just last year.

Spain’s early exit might be the final nail in the coffin, but I believe that what we’ve seen over the last two years isn’t the end of a style, it’s perhaps the end of a group of players’ ability to play it well.

As one of my friends points out: “Time and again it has been proved that whatever the philosophy of great sides in history, when played to perfection has been unmatched. The Catenaccio and Total football were stifled when not played to perfection by improper or ageing personnel. But it wasn’t the end. There’s nothing to suggest Tiki Taka is dead. Spain’s disaster in Brazil was much down to a complacent defense, tired personnel and a lack of plan B from the La Roja.

As the Guardian’s Jonathan Wilson puts it, “Tactics evolve through evolution.”

Zonal Marking back into the picture: While the majority of the 32 teams have employed man to man marking, it was surprising to see Portugal resort to zonal marking from setpieces. Paulo Bento’s side have two entirely different centre backs, the more proactive Pepe and the slow to react Bruno Alves. 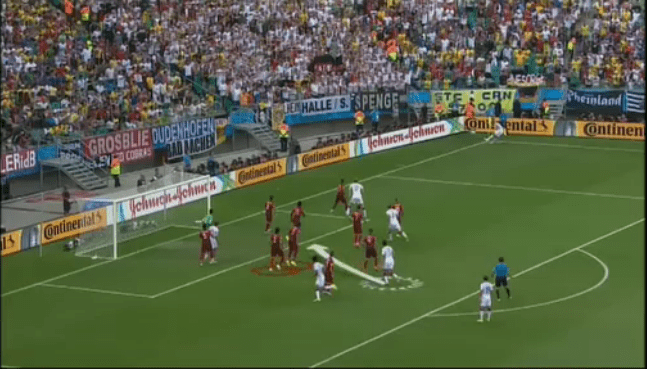 As the above snap shows, neither of the two circled defenders run into their zone as Hummels scores with a thumping header. There is a saying in England that zonal defending is not an art rather it makes no sense, as stationery centre-backs come up against a mobile attacker.

In England, one would hear the saying that “Zonal marking is not defending.” The pundits who comment simply ignore fact that goals are scored even when defenders are man marking. Man marking is not the be all and end all of defending. It’s still a system that leaks goals. With zonal marking, whenever the team defends from set pieces, there are certain zones that defenders are allotted to run into. If one player sees the ball entering this zone, he gets rid of it. The Portuguese failed to do so and paid the price.

A few days ago just before the start of the World Cup, Micheal Cox had highlighted that the absence of quality left backs will trouble teams in the showpiece event. Two of the three world class players in that position are now already out, Jordi Alba ready to pack his bags after Spain’s astonishing exit, while Fabio Coentrao will miss the rest of the tournament through injury. 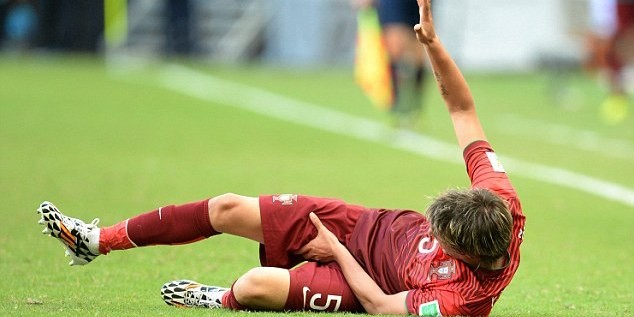 Given Portugal’s performance in their opening game against the Germans, not many would have given Paulo Bento’s side much of a chance. Belgium’s problems are however more drastic. Marc Wilmots’ side lack a specialist full back, which is sure to dent the Red Devils’ chances as the tournament prolongs in length.

Both Toby Alderweireld and Jan Vertonghen are centre backs for their respective clubs and the manner is which the latter constantly struggled against Algeria’s Sofiane Feghouli’s pace on the right flank in the last game was evident.

Alegria constantly tried to expose Vertonghen’s lack of pace as Feghouli was ready to chase almost everything out wide. Wilmots’ two substitutions got the Belgians out of jail, and Kevin De Buyne was certainly involved in both of his side’s goals. The former Chelsea man is certainly expected to be a key man in Belgium’s campaign in Brazil, but they might rue the lack of a quality full back beyond the group stages.

The guys at Sports Matrix have kindly provided us with a neat little infographic (made in tandem with Tiki-Ticker) showing the intimate details of the first round of World Cup group games.

It shows that despite having the most shots shots on goal in the opening round of games, Ghana were unable to beat a resilient US side, while Iker Casillas saved the most attempts, despite conceding five times in the loss to Holland.

Colombia won convincingly against Greece in their first match, with Jose Pekerman’s side sending in the most crosses, despite having relatively shorter players.

Check out the graphic below, with some more surprising statistics from the first round of World Cup group games: 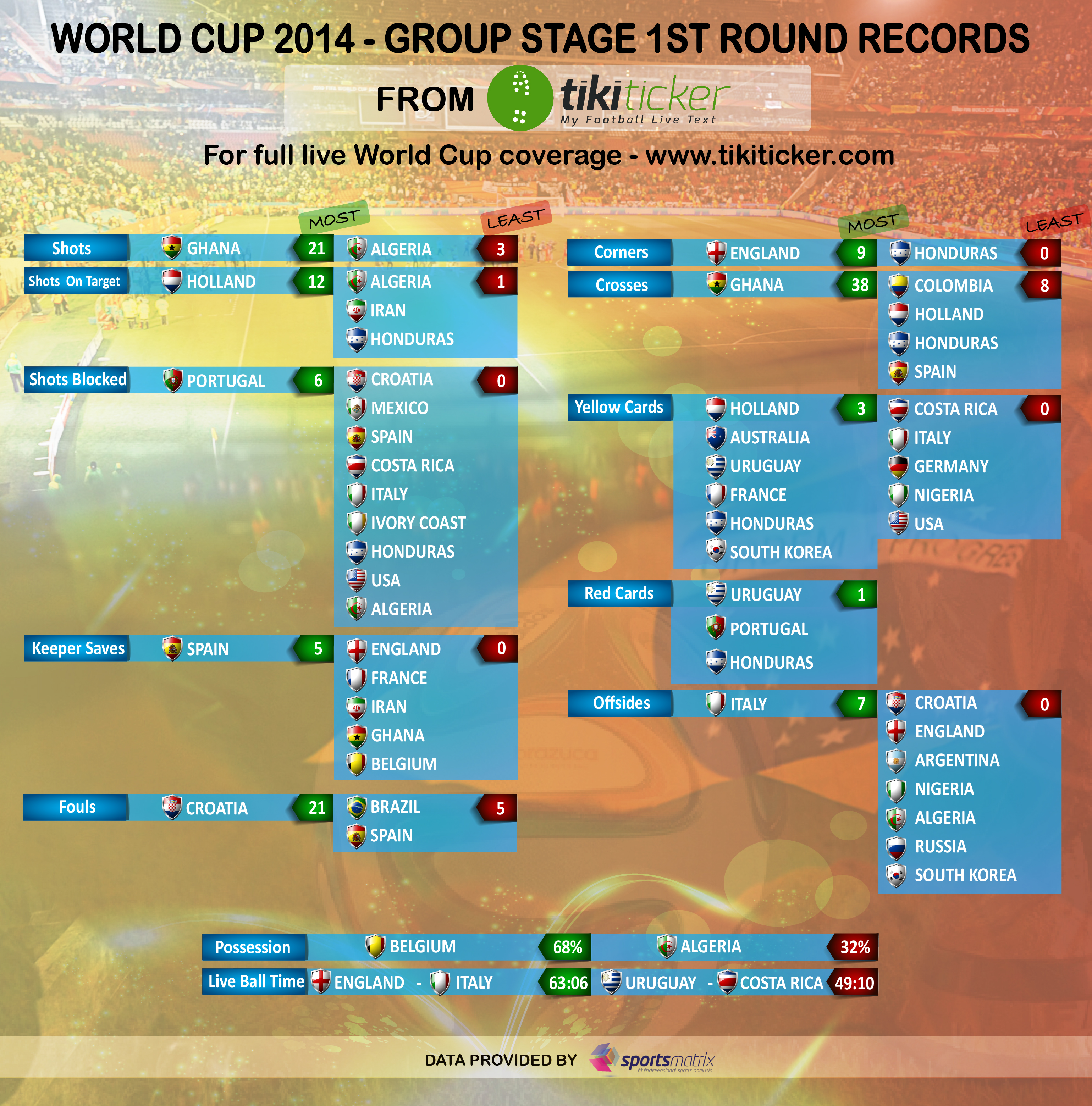 What do you make of the stats, and of the first round of matches? Do you agree with the analysis? Get involved in the comments below..