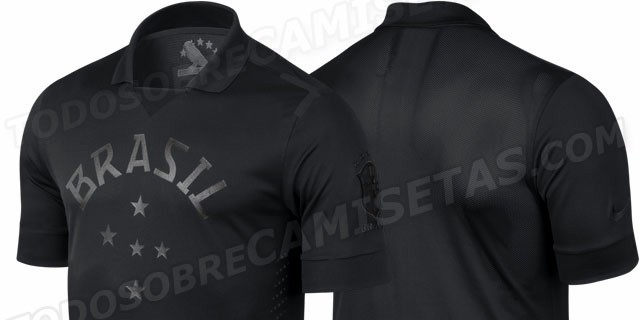 In recent years, Nike has prepared a special ‘All Black’ shirt for the Brazil national team and this year has been no exception.

Although these black third kits has never seen any action on the field because the rules of the Brazilian football federation, CBF, prohibits the use of any other jersey than the classic yellow and blue or the alternative kit.

This kit is sold as a ‘Third Kit’ limited edition. This year, the design of the shirt is a simple polo shirt. The word ‘Brasil’ is written on the chest along with the five stars for the five glorious World Cup wins.

The CBF logo appears on the left sleeve while the Nike Swoosh occupies the right sleeve. Other than that, there are no major design features except for a little detail around the shoulders and on the sides of the shirt – also done in black.

The Brazil national team’s next international game is a friendly against England; this time at the iconic Maracana stadium in Rio de Janeiro. The match is scheduled to be played next month on Monday, 3rd June, 2013.

It will be a real test for the Selecao and a chance to avenge the 2-1 defeat at the Wembley Stadium – thanks to goals from Wayne Rooney and Frank Lampard.

Brazil’s recent form has been terrible compared to their standard with just one win in their last five games (W1 D3 L1). This bad patch of form came after a stretch of good performances in 20 games (W16 D2 L2). The home game against England will be a real test for Luis Felipe Scolari and his men.