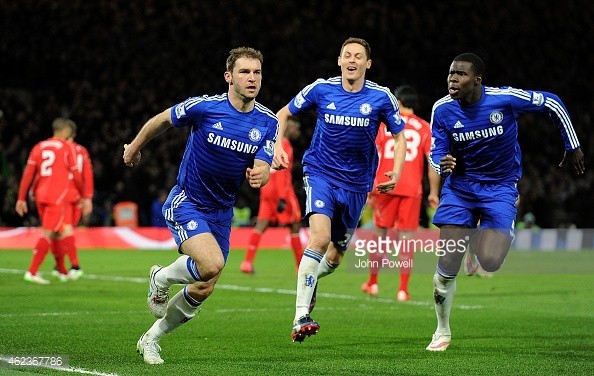 A defender who can come up with goals when his team needs it is the most is a priceless asset to have. Usually, that responsibility is left to the attacking players, but at Chelsea, a certain Branislav Ivanovic has more than once been the saviour.

He is physically one of the strongest players in the Premier League and a defensive rock.  He also though, possesses the quality to score a good number of goals at the other end. Last night, he scored the crucial away goal in the 1-1 draw at Paris Saint-Germain in the first leg of Chelsea’s UEFA Champions League tie. This was also his third goals in five games, with all them being extremely significant ones.

In this piece, we take a look at 5 of the most important goals that the Serbian has scored for Chelsea.

Signed from Lokomotiv Moscow in 2008 by Avram Grant, Ivanovic had to wait 9 months to make his Chelsea debut. He shot into the limelight in the UEFA Champions League quarter-final stage at Anfield against an in-form Liverpool side. The Reds took the lead early on through Fernando Torres and Chelsea needed a response. It came from an unlikely source as Florent Malouda’s corner was headed in by Ivanovic for his first goal for the club. In the second half, incredibly, he did it again. This time the provider was Frank Lampard, and once again, the right-back leapt the highest to head in and give his side the lead. Chelsea went on to win the match 3-1 and the tie 7-5 following a thrilling second leg at Stamford Bridge.

In one of the most dramatic nights ever at Stamford Bridge, Chelsea overturned a 3-1 deficit from the first leg against Napoli to take the game to extra-time. Once again, it was Ivanovic who was the hero as he thumped home a cross from Didier Drogba into the top corner to make it 4-1 and send the home fans into raptures. This goal was made even more significant by the fact that Chelsea went on to win the Champions League that season.

With the score at 1-1 and the game set to enter extra-time, Chelsea got a corner in the dying minutes of stoppage-time. Juan Mata’s inswinger was met by Ivanovic at the back post and ball looped into the far corner for the Blues to claim the win. Following a season of ups and downs, it was sweet to gain a piece of silverware in Europe once again. And once again, Ivanovic was the hero. Chelsea produced one of the best performances by any team last season, when they beat Manchester City 1-0 at the Etihad Stadium. They could have, on another day, won by a bigger margin, hitting the post thrice and dominating throughout. But, in the end, it was Ivanovic who made the difference. The defender hit a fierce left-foot volley into the corner past Joe Hart to give Chelsea the win. Unfortunately though, the Blues were unable to kick on and win the league, losing out to City and Liverpool in the end.

Chelsea and Liverpool engaged in a real battle in this tie. Following a 1-1 draw at Anfield, the Reds came out all guns blazing in West London and matched Chelsea stride for stride. After a goalless draw after 90 minutes, the game went into extra-time. Ivanovic, who had a a foot injury and was playing through the pain, scored the goal that sealed a place for his side in the final. He headed in a free-kick from Willian to seal Chelsea’s progress and give them a chance at winning the first piece of silverware up for grabs this season. Jose Mourinho knows the importance of this competition, as it was his first trophy during his first tenure as Chelsea boss back in 2005.

2) Last night’s goal vs Paris Saint-Germain: This is a huge goal, make no mistake about it. But it will make the list only if Chelsea take advantage of the away goal and seal progress to the quarter-finals in the second leg at Stamford Bridge.