Sportslens.com
Home Teams Chelsea Is Branislav Ivanovic the best full back in the Premier League?

Chelsea increased their lead at the top of the table by 7 points as they beat Aston Villa on Saturday, taking full advantage of Manchester City, who drooped points at home against Hull City. Blues manager Jose Mourinho heaped praise on right back Branislav Ivanovic who scored the match winner at Villa Park and claimed the Chelsea defender is one of the club’s best ever signings.

Signed by Avram Grant in the winter transfer window of 2008 for £9m from Lokomotiv Moscow, the Serbian has grown by leaps and bounds for the Stamford Bridge side. He was earlier linked with Manchester United and various scout reports labelled him as a player who can ‘play anywhere’ in defense.

Hailing Ivanovic, Mourinho said, “He came immediately after I left and after that he made a fantastic contribution for this club. He is a competitive animal. A big heart. What really matters more is what we as a club feel for him and people like John [Terry] and [Gary] Cahill, guys that without them — you cannot do anything. A team is an artist like [Eden] Hazard, it is a defender like Branislav. The mix and combination of talent makes a team.”

“Every striker in the world would be proud to score that magnificent goal, it is an amazing goal. When he scores that goal and it is three or four nil it is a different feeling. He is a great guy, what he is doing for us is unbelievable.”

So is it Ivanovic’s defensive contribution or his long bursting runs on the right wing which makes him such an asset for any team? Or is it his ability to throw his body on the line when required?

Or is it his incredible heading abilities from set pieces that makes his such a threat? Is he the best full back in the Premier League currently? We take the help of stats gathered from Squawka

Chelsea have conceded just 21 goals in the Premier League this season and boast of the second best defensive outfit after Southampton. One key aspect of this has been John Terry’s impeccable fitness, Gary Cahill’s solidity (despite being error-prone in the past few weeks. Add to this Ivanovic’s immense work rate and Cesar Azpilicueta’s defensive discipline. 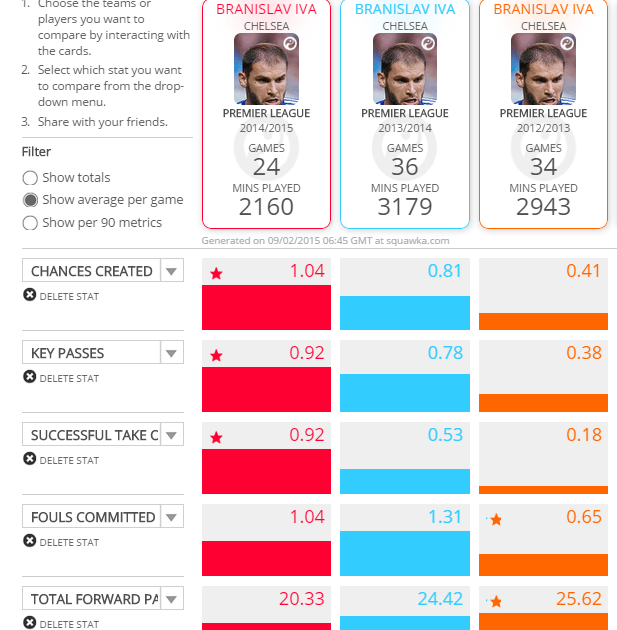 As per the above stats,  Ivanovic’s offensive contributions in the past three seasons has been taken into account. To bring parity of the above stats, we have considered metrics on average per game.

As it is clearly evident, the Serbian is involved in Chelsea’s build up play leading to goals in almost every game. The trend has also kept on improving from the past seasons. Similarly, his tackling is absolutely phenomenal, hardly committing fouls which could put the defense under pressure. 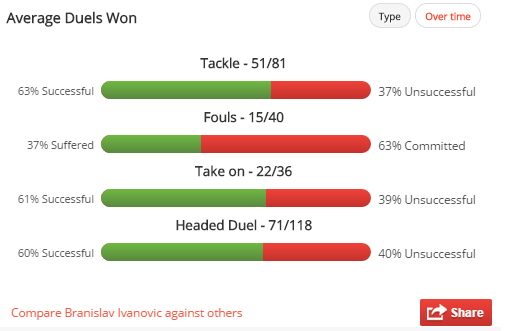 Going forward, Ivanovic is assured thanks to the presence of Nemanja Matic, who slots in as the third centre back when Chelsea move on the counter. Ivanovic has thus been involved in over 20 forward passes this game which helps the triumvirate of Oscar, Willian and Hazard to maintain the tempo of the game. 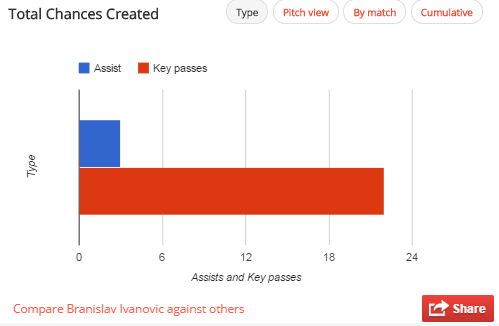 The right back is also a huge threat for the opposition in set-pieces. Ivanovic is a brilliant header of the ball who can come up with the goods when required, remember the Capital One Cup semi final against Liverpool and the Europa League final vs Benfica.

While Nathaniel Clyne and Seamus Coleman are also superb going forward, none of them are great attacking outlets.

The key for Chelsea in the coming games will be to maintain their tempo and should they grind out victories like they have done, the Blues could wrap up the League title by the end of February.